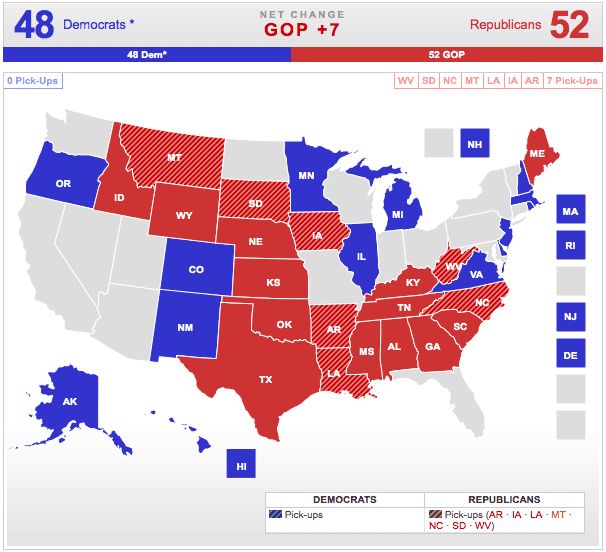 We’re at war again in Iraq, the Never Great Recovery shows signs of stalling, Obamacare’s popularity continues to shrink despite Democratic promises to the contrary, President Barack Obama’s poll numbers look like my high school calculus test scores, and fewer people than ever approve of the job done by Congress. In the face of all these headwinds, as I don’t need to remind you, there’s a little midterm election coming up in November.

Incumbents versus angry voters — who wins?

In the Senate, RCP averaging gives the GOP a seven-seat pickup in November, for a total of 52, and slim-but-effective control. The last time we looked, the GOP was going to net only five seats, giving Joe Biden the deciding vote to keep Harry Reid as majority leader. 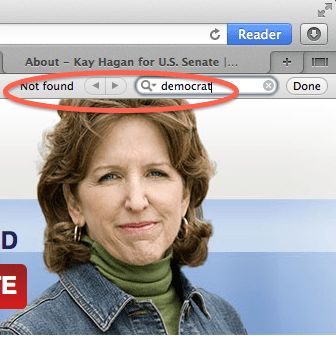 What’s changed since June? For starters, reality is catching up to the poll results, giving Republican challenger Thom Tillis a leg up over Democrat incumbent Kay Hagan. Out of the polls sampled, only left-left-left leaning PPP gives Hagan the advantage, and that’s by just a single point. A quick look at Hagan’s official bio page reveals that the words “Democrat,” “Obama,” “Affordable Care Act,” and “health care” are all MIA, but all of them seem to be haunting her with North Carolina voters.

Georgia has flipped from GOP to Dem and back again, now that GOP primary voters finally settled on an actual candidate in David Perdue. The Atlanta Journal-Constitution is already fretting about Perdue helping to lead a “confrontational” GOP majority. We should be so lucky. His opponent, rookie Democrat Michelle Nunn, bears her popular father’s last name, and seems eager to promote how well she works with Republicans like George H.W. Bush and Orrin Hatch. If there’s a telling detail in how far and how fast Democrats in red states are running from the Obama record, that might be it.

Rounding out the changes since our last report, Iowa and Arkansas have both flipped from D to R.

In Iowa, Republican Joni Ernst and Democrat Bruce Braley are locked in an epic battle. Ernst entered the race in the low-30s, a good six-to-eight points below Braley. But she seems to have solidified her base, edging just ahead in the mid-40s. Braley has run a problematical race, to put it gently, and may have trouble sealing the deal with independent Iowa voters, who might not fully support a candidate with a habit of talking down to his would-be constituents. In short, Braley is a little too weird and far too mean-spirited to connect with decent midwestern folk like I grew up with. If Ernst can commit to the retail politicking Iowans love, then this race won’t be nearly as close as it looks today.

Arkansas was always going to be a tough place for the Democrats to hold their ground, as the state completes a decades-long redshift. Dem incumbent Mark Pryor is somewhat untested, having been first elected in 2002, but facing no GOP opposition in 2008. He’s a moderate on social issues, and was one of only two Democrats to vote against a 2007 Senate resolution to withdraw from Iraq — but Arkansas voters may choose challenger Tom Cotton as a way of expressing their bleak assessment of his vote in favor of ObamaCare. The Washington Post’s Greg Sargent argued this week that ObamaCare isn’t the electoral drag it once was, but Cotton has been running hard against it — and is up by two to four points in most reputable polls. Or as Deb Fillman noted last week:

Take ObamaCare for example; there are no fewer than 13 Democratic candidates currently running full-tilt away from their votes to pass it. Candidates like Mary Landrieu (D-LA), Mark Pryor (D-AR), and Kay Hagan (D-NC), to name a few, are doing everything they possibly can to apply all three of the above tactics to distance themselves from the President’s “Lie of the Year,” a lie they all parroted dutifully, not just once, but multiple times.

I really don’t need to mention Montana, but I do really want to. Republican Steve Daines is hardly the most inspiring candidate, yet he’s up by an average of 14 points over sitting Democrat John Walsh — and that’s before Walsh dropped out of the race over plagiarism charges from a 2007 paper he wrote while attending the Army War College. Montana Democrats have since settled on state House member Amanda Curtis, who reminds me of a woman I dated for about three weeks in 1997, only more smug and less sane. This YouTube collection of her greatest video podcasting hits is priceless.

The folks at DailyKos, perhaps not exactly the keenest observers of Montana politics, think she’s a winner — which means she’ll be lucky to snare Walsh’s meager 38% on election day. Honestly, races like this one are why I love American politics and always will.

Keep your eye on Colorado and Oregon, too. You can smell the desperation of the Mark Udall campaign, even though only Quinnipiac shows GOP challenger Cory Gardner with even a modest lead. My friend (and numbers guy) Tom Dougherty will have new numbers crunched on Friday, but as of last month he still had Oregon in play for newcomer Monica Wehby.

With all this anti-incumbent fever, you might expect the GOP to lose a few seats on the House side of the Capitol Building. Only 17 races are considered truly competitive this year, and out of those a grand total of four are currently in GOP hands. All things being equal, the Republicans might actually net a half dozen seats. That’s remarkable for one reason: The Democrats have a natural floor of about 175 House seats — races they couldn’t lose if they nominated flesh-eating zombies. And the Republicans are near their natural ceiling of about 245 seats — races they couldn’t win if they nominated God, Himself. So if voters were looking to reject incumbents, the GOP would have by far the most to lose.

Naive Mitt Romney Still Doesn’t Get It: Obama Does Not Make Policy ‘Mistakes’