The United States’ best ally in the war against radical Islam is the one that the State Department either refuses to see or chooses to ignore: the people of Iran. Anti-mullah sentiment is widespread in the country, particularly among the women and the youth, who courageously stand up to the regime that can beat, jail, and torture them without fear of reprisal or punishment from the international community. Yet, even when facing the personification of evil, the Iranian people stand strong and are in search of allies in the West to broadcast their message.

The recent events at Amir Kabir University in Tehran serve as a testament to this fact. On February 21, students began a large sit-in, amounting to 500 protesters, according to the Iranian who sent me a report on the event. The photos and footage sent to me confirmed that large crowds were present. The protest was sparked by the regime’s detention of four student activists who had begun a hunger strike while in prison, the banning of five other students from the university’s premises, and the decision by the government to bury the coffins of soldiers from the Iran-Iraq war at the university. The regime has used this tactic in the past to suppress the freedom of movement in Iran, as it is illegal to “disrespect” these burial grounds by having large gatherings that don’t pay tribute to their sacrifice. It also gives the mullahs’ henchmen a reason to drop in without warning.

Chanting things like “Students will die but never bow down” and “Death to dictatorship,” the protesters clearly identified themselves to the regime’s spies. According to the report sent to me, 20 students were disciplined by the university and the families of some of the protesters received threatening phone calls.

Undeterred, the protesters continued their demonstrations into a second day and then into a third day. According to the Iranian who sent me the information, 60 student protesters were injured by the regime’s forces, of which 20 were in “very bad” condition, and 120 students, including 30 females, had been arrested.

Amil Imani, an Iranian democratic activist in the U.S., writes that the website of the university’s newsletter also reported on the clashes during the protest, describing how “chest-beating mourners brought the martyr coffins yesterday morning. Before the parade, security forces, Basiji campus police, Revolutionary Guards, plain-clothed intelligence officers, armed vigilantes known as Ansar-e Hezbollah (a violent Islamist organization under the unofficial sway of the supreme leader), and even the fire brigade gathered inside and around the university compounds.”

“The security forces and vigilantes used clubs, tear gas sprays, iron knuckles, knives, and other weapons in order to wound the protesting students. At least 25 have been arrested and nine hospitalized with knife wounds and other injuries so far, and the fighting continues as we speak. Another student slogan repeated on the website: Ansar commits the crime, the leader supports it,” Imani quotes the newsletter as saying.

The protests at Iranian universities stand in sharp contrast to the protests that occur at U.S. universities. While the Iranians put their lives at risk to demand freedom and democracy, American students protest the injustices of American and Western imperialism and oppressive capitalism. Often sporting Che Guevara shirts and chanting slogans asserting 9/11 was an inside job and that our leaders are war criminals in need of an international trial, American students are often seen challenging any decisive action meant to advance freedom and defeat those who would vanquish the right to publicly express disagreement — ironically, the same rights American students utilize in their very actions.

Students in the West need to learn something from their counterparts in Iran. Freedom is worth fighting for, and standing up for freedom is not an act of selfishness or imperialism; it’s an act of respect for those who struggle for air in the clamped palm of tyrants and a recognition that our security comes from advancing our principles, not abandoning them.

Those belonging to today’s non-interventionist and pacifist movement often proudly look at America’s so-called “isolation” from the rest of the world as vindication of their worldview. To them, each act of violence and hatred towards the U.S. is seen as evidence that they’re intellectually superior to our leaders, whose failure at objectivity leads them to foolishly believe that not all humans are rational and capable of holding hands in pursuit of common interests.

The protesters at Amir Kabir University serve as a reminder that our best allies in this struggle won’t always have government offices in capitols or votes at the United Nations. They are those who still have hope that America hasn’t forgotten her principles, and they simply want to be heard and politically supported. If the non-interventionists have their way, America may no longer feel isolated, but today’s Minutemen in Iran and around the world will be.

The photos below should tell all Americans whose side we should unashamedly be on. 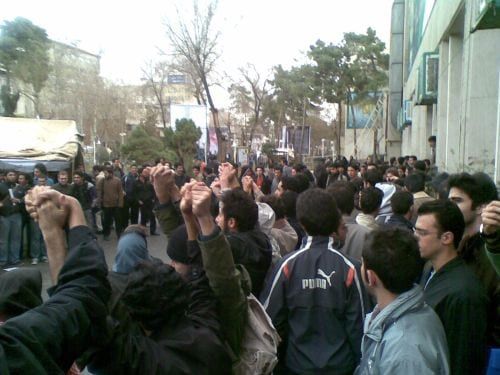 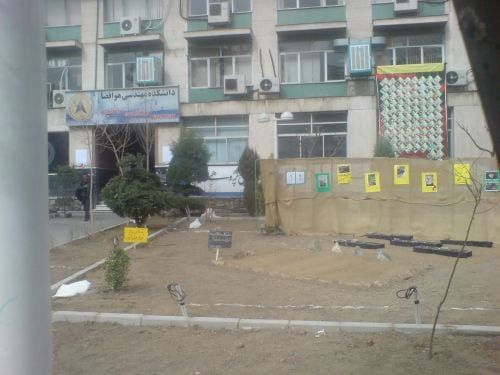 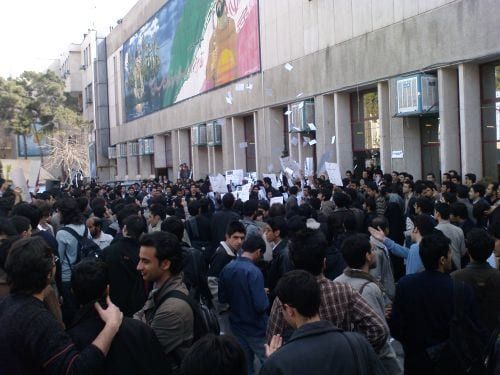 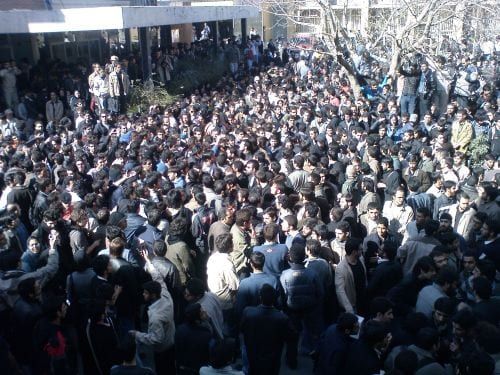 Ryan Mauro is the national security analyst of RadicalIslam.org, the founder of WorldThreats.com and a frequent guest on Fox News Channel. He can be contacted at [email protected]
Read more by Ryan Mauro