San Francisco’s naked protest and the ethics of public nudity

But the ever-escalating recent increase in public nudists spurred S.F. supervisor Scott Wiener to propose new legislation requiring naked people to sit on towels when using public facilities, and also to cover their nether regions while eating in restaurants — so that other residents won’t have to come into contact with whatever bodily excretions that might result from sitting down pants-free.

Well, as luck would have it, the more politically-minded of the public nudists had already scheduled a pro-nudity protest just on general principles, but the timing was perfect to make it into a photo op for the newly proposed towel law.

Needless to say, I was at Saturday’s protest, camera in hand.

I had originally intended to make this a lighthearted post, but the more I thought about it, the more I felt the protest merited serious analyis.

So, below, you will find discussions about the purpose of clothing, public hygiene, exhibitionism, community standards and morality — and lots of pictures of naked men. If you don’t want to see the pictures, stop reading now.

(Note: This is the G-rated version of this report, with all photos blurred out where appropriate; if you want to see the X-rated version, in which all the pictures are uncensored, click here.)

The protest was held in a small plaza at the intersection of Castro, 17th, and Market streets in San Francisco. While the Castro District is well-known as a sort of outdoor gay-themed tourist attraction, it is still a “real” part of the urban landscape, just like any other part of the city, with street lights and gas stations and trolley tracks and laws. Traffic streamed by as the nudists (all men) began to assemble, several of whom were carrying protest signs saying things like “Nude is not lewd” and “Get your hate off my body.”

It was cloudy and a bit chilly, but that didn’t stop about 40 or 50 men from standing around naked, and posing for the phalanx of photographers who had assembled across the tracks.

Local alternative newspaper The Bay Guardian saw a chance for a publicity stunt and produced “Butt Guardian” towels so that everyone could be in compliance with the new anti-excretion ordinance.

The quote above got me thinking about the very purpose of clothing, something I had never really pondered until now. Humans wear clothing, obviously, to keep us warm in cold climates. But clothing has several other functions as well:

And this is the source of the conflict: Wiener’s law merely addresses the issue of public hygiene in point 4 above — but the nudists are protesting the cultural norms in point 2. Yet no matter how successful they are in smashing cultural norms, they still can’t escape the general consensus that day-to-day urban nudity has pubic health consequences.

The nudists’ reply is that the “pubic health” argument is merely a smokescreen to justify puritanical repression. The anti-nudity advocates are being dishonest, the protesters argue; opposition to public nakedness is not based on concern about transmissible diseases, but rather on old-fashioned prudery.

While that may be true, I counter with this: The San Francisco public nudists are also being dishonest; there is indeed a sexual component to their behavior, and they are exhibitionists using politics to justify their thrill-seeking.

The naked protest originally had nothing to do with the hubbub over the new towel legislation; it was in fact basically just a launch party for the Folsom Street Fair (advertisements for which were visible all around the intersection, as seen in the photo above):

The event, which had been scheduled before Wiener’s proposal was announced, was part of the unofficial celebrations leading up to the annual Folsom Street Fair, billed as the world’s largest leather and fetish event.

Now, I didn’t cover this year’s Folsom Street Fair (held yesterday — too cold!), but I have covered it in the past, and — trust me on this — it is a free event held on city streets at which people unabashedly have sex in public. (Actually, you don’t have to trust me — you can simply click on my EXTREMELY NSFW report about the 2007 Folsom Street Fair and see the proof for yourself.)

The Folsom Street Fair is primarily a festival of sexual fetishes — bondage, sado-machochism, animal fantasies, and so on — yet the pre-eminent sexual fetish at the Folsom event is the one least discussed: exhibitionism. This man, for example, is an exhibitionist, as were a great many others at the fair. Exhibitionists derive sexual pleasure from having people watch them engage in sex. You, the observer, are a participant in their sex act, whether you want to be or not. That’s the point, the source of the “thrill.” If you attend the Folsom Street Fair, to a certain extent you are knowingly agreeing to be “visually raped” and to participate in the exhibitionist sex of others, just by being there to view it. Almost always, when someone at the fair began to masturbate, a crowd would form to watch: and by so doing would voluntarily become second-hand participants in the solo sex act — just as you the viewer are doing right now.

No, according to The Bay Guardian, which has leapt to the defense of the public nudists.

In response to a San Francisco Chronicle columnist who wrote,

…The Bay Guardian had this to say in reply:

Actually, I’ve often walked my daughter to school along Castro Street, and I don’t care whether people are naked or not. Neither does she. My kids are San Francisco city kids; it’s all a big Whatever. And the naked guys in the Castro, mostly middle-aged men, aren’t “exposing themselves” in the way of a sex offender who gets off on it; they don’t confront anyone, or jump in front of anyone, or try to force anyone to look at them. They aren’t fucking in the streets. They’re just walking around (and sitting down) without clothes on.

The Bay Guardian‘s argument basically comes down to this: If these guys aren’t parading around naked for the thrills, then they aren’t deriving any sexual pleasure from it, and thus there’s nothing wrong with what they’re doing. And that is also exactly what San Francisco’s extremely lax laws about pubic nudity say: unless you are engaging in “lewd thoughts or acts” then you can be naked in public.

But hang one one minute. It’s pretty easy to identify a “lewd act,” but how can we judge whether someone has a “lewd thought” while showing his naked body to you? Presumably, this is a legal euphemism for “getting a hard-on”: If a guy has an erection, the law presumes he is engaging in “lewd thoughts”; and (here’s the key) if he doesn’t have an erection, that’s proof that his thoughts are pure.

But there’s another way we can assess their motivations aside from measuring the engorgement levels of their penises. Look at the sign above and the sign in the first photo; both reveal that the protest was organized on a Web site called nude-in.blogspot.com. If you visit the site (mild NSFW warning), you’ll see that the protest’s Web page — and hence the protest itself — was actually masterminded by Bare Naked in Public, which according to the protest page’s own sidebar “is the most all inclusive male exhibitionist destination on the Internet.”

And if you dare to click on the VERY NSFW Bare Naked in Public home page, you will finally see the truth (and a whole lot more) revealed: San Francisco’s urban nudists are exhibitionists who derive sexual thrills from exposing themselves in public.

There. Someone had to say it.

And if that’s true, then they are indeed breaking the city’s anti-nudity ordinance because they do think “lewd thoughts” while parading around naked.

Common sense tells us the same thing. As this picture shows, the spot chosen for the nude protest is basically on a traffic island in the middle of an extremely busy intersection; trolley cars filled with commuters and tourists run immediately adjacent to the “park,” while a six-lane major traffic artery runs along the other side; and one of the city’s most crowded pedestrian streets leads right to the same intersection. Why choose that particular spot, not just for Saturday’s protest but for daily nudity year-round? The goal quite obviously is to be seen by as many people as possible. The nudists claim they just want to be left alone and be free to go about their daily lives with no clothes on. But if that were the case, they wouldn’t purposely congregate in crowded places.

Furthermore: San Francisco is not a particularly warm town. To quote Mark Twain: “The coldest winter I ever spent was a summer in San Francisco.” No one in their right mind under normal circumstances would want to be naked in San Francisco. You’d have to have a reason — like being an exhibitionist.

If you truly just wanted to be naked, you can be naked at home. Or at San Francisco’s city-sanctioned nude beach (Baker Beach). If if you wanted to be naked amongst other naked people, there are several nudist colonies in the Bay Area and northern California. But no. These protesters and urban nudists don’t simply want to be naked in private or be naked around other naked people; they want to be naked around clothed people. Because that’s where the sexual thrill originates; violating a taboo. Being naked where nakedness is normal doesn’t count; eliciting shock or interest from unwitting strangers is the whole point.

To end on an upbeat note: one of the protesters set up an easel right on the corner of Castro and 17th and began painting.

His masterwork depicted UFOs landing and naked humans running out to meet their alien saviors. On the table next to his easel (directly behind him in this photo) were several books about extra-terrestrials and UFO invasions.

Now, see, this guy might legitimately claim that he is naked in public for a completely non-lewd reason — to welcome our alien brothers when they arrive. But the other protesters have revealed not just their genitals but their real motivations.

One final point: What is the feminist position on all this? 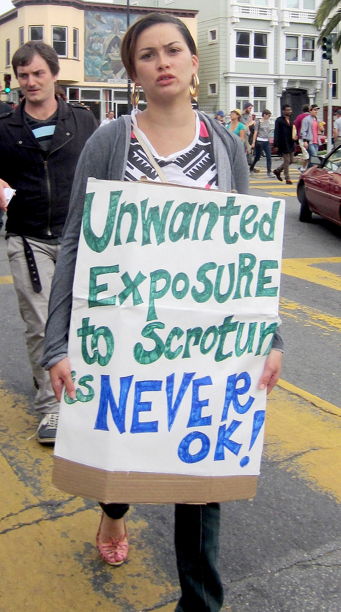 Last month I covered yet another San Francisco protest, this one called Slutwalk, where this photo was taken. And the message at that protest was “Unwanted Exposure to Scrotum Is Never OK!”

Why are only feminists allowed to point this out?