Why Did a California County Just Reduce Its COVID Death Toll by 25%?

Welcome to Insanity Wrap, your daily dose of the best of the worst. “How many really died from COVID?” is today’s big crazy.

Let’s begin with some lighter fare, shall we?

"What does the press get wrong when covering Biden's agenda… What do you think we get wrong?" pic.twitter.com/h44JCb6WZB

We sure did finish it in record time, though.

North Carolina police force says it WON’T respond in-person to 911 calls about theft, fraud, or trespassing after 84 cops left the force since January 2020

Insanity Wrap is old enough to remember when crime exploded in the ’70s. It was so bad that it would take 20 years to start bringing rates down again.

But at least the last time around, you could generally depend on the police to show up when called.

It wasn’t policy back then for the police to shrug their shoulders at little things like theft and trespassing.

But that is exactly the policy now in at least one city:

The police department in one of America’s fastest-growing cities is facing staff shortages so severe that it will not respond to certain 911 calls, including complaints of burglaries, theft, property damage, identity theft, or trespassing.

The Asheville, North Carolina Police Department said that it has lost 84 officers since January 1, 2020.

APD Police Chief David Zack says the attrition rate, which has accelerated since protests against law enforcement became widespread in the wake of George Floyd’s death in May of last year, has reached crisis proportions.

Insanity Wrap’s initial thought was that, just like the ’70s, things are going to get worse before they get better.

But then we thought of Steely Dan’s “Blues Beach,” (embedded above) and one particular line from the song.

“Things may get a whole lot worse before suddenly falling apart.”

Previously On Insanity Wrap: The Paranoid Were Right All Along About Fauci (And More)

The Amazon driver told the elderly woman to check her white privilege and she said no, so she beat her up. pic.twitter.com/BiKQ9ZjJ3X

Does anyone still believe that Critical Race Theory is anything other than a way to get us to hate one another?

Nope. Nobody is that crazy, so today’s craziest person is nobody.

The problem is that for the progressive Left, violent hatred is a feature rather than a bug.

The old woman in the video is just one of those eggs in need of breaking.

Or as Insanity Wrap likes to remind people about socialism: 100 million broken eggs, yet not a single omelet.

For the third or maybe fourth time ever, Insanity Wrap is pleased to present a totally peaceful protest.

You can join in yourself, gentle reader.

All of celebrity medical spokesmodel Anthony “Doctor” Fauci’s FOIA emails can be yours (on Kindle) for the low, low price of just $2.99.

We just bought a copy, but you might want to act sooner rather than later.

Amazon has already flagged the ebook with “Item Under Review,” so Insanity Wrap figures they’ll pull it just as soon as they realize what it is.

CORRECTION: We had thought we’d bought the book, but no. It isn’t yet available, and we have no idea when — if? — it will be.

I wasn't aware how much I needed to see people gathered together and having fun until I saw a crow of people hanging around the Toyota Music Center in Dallas this weekend to watch live music. I couldn't get over how nice it felt and wanted to join in. https://t.co/l3eXLNNwIQ

Isn’t it lovely, getting back to normal?

Isn’t it awful, that we ever left it?

Previously On Insanity Wrap: Looks Like Biden’s Planning to Stand by His Man

How Many Really Died from COVID? Another Damn Thing We Have to Be Concerned About 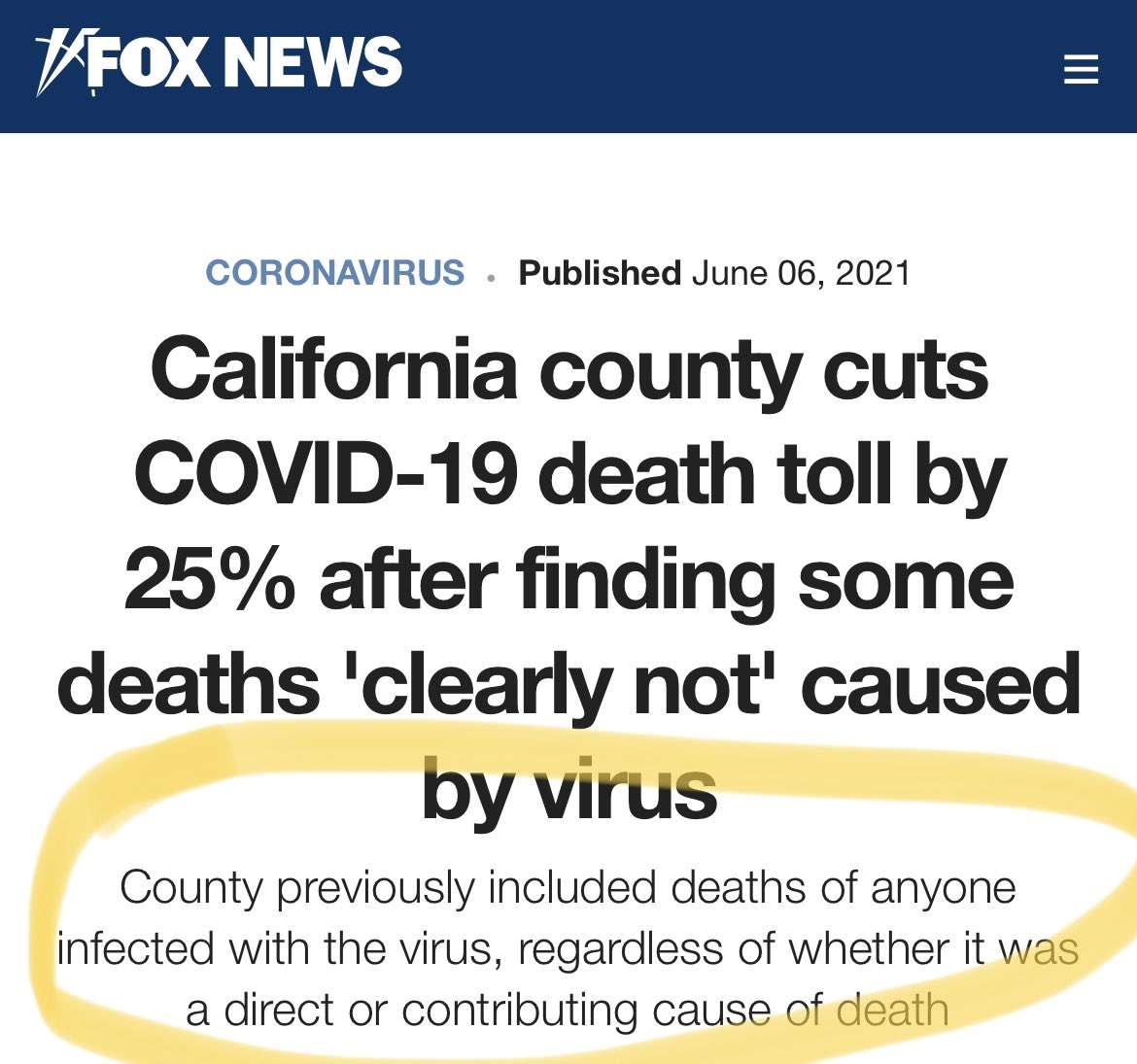 Insanity Wrap thought we’d gone genuinely crazy last year, when we found ourselves having to explain the difference between “died from COVID” and “died with COVID.”

Died from meant the victim died from a particularly nasty respiratory bug that compelling evidence indicates escaped (or was released) from (after having been enhanced by) the Wuhan Institute of Virology in Communist China.

Died with meant you could have died from anything — up to and including getting in a motorcycle crash — while having a Wuhan infection of any severity, even asymptomatic.

Statistically, in most places, both “from” and “with” were counted as COVID fatalities, due in large part to financial incentives from Uncle Sugar.

We all knew about this a year ago, but what no one could know was what the percentage was of “with” to “from.”

The change is a result of Alameda County’s “alignment” with state guidelines, the county news release on June 4 stated. It said that the county previously included in its total virus toll any person who was positive for COVID-19 at the time of their death. This broader system was implemented prior to the state’s implementation of guidelines for reporting COVID-19 deaths.

Now, it will only include those who “died as a direct result of COVID-19, with COVID-19 as a contributing cause of death, or in whom death caused by COVID-19 could not be ruled out,” as per the state guidelines.

Reading that last bit again, Insanity Wrap realizes that the false-positive figure could be even higher than 25%.

But even that 384k figure is a bit misleading.

We’ll never know how many of those excess deaths were actually due to the Wuhan Flu, and how many were due to our hamfisted response to it.

But even if we knew that ghastly total, the excess deaths figure would still be misleading.

The typical “died from Wuhan” victim had an average of 2.4 comorbidities and/or was quite elderly.

What that means is that in 2022 and maybe even 2023-24, we might enjoy a mortality deficit. That is, fewer people will die than expected.

Wuhan Flu is a picky eater, and it almost exclusively kills people who, if Insanity Wrap could be morbidly frank about it, were going to have their number come up in the next year or three, regardless.

It isn’t at all like the Spanish Flu of 1918 that killed mostly young adults in the prime of life, and whose early deaths wouldn’t show up as a deficit for decades.

So while we will never know how many people actually died of the Wuhan Flu, there is one thing we can say for certain: Our response to it at the state level in Democrat-run places like California, New York, and Michigan was politically motivated, economically ruinous, authoritarian, and murderous.

Insanity Wrap made a third Bloody Mary while writing this section and wholeheartedly recommends you do the same.

Yes, even if you are at work.

Steve launched VodkaPundit on a well-planned whim in 2002, and has been with PJ Media since its launch in 2005. He served as one of the hosts of PJTV, a pioneer in internet broadcasting. He also cohosts "Right Angle" with Bill Whittle and Scott Ott at BillWhittle.com. He lives with his wife and sons in the wooded hills of Monument, Colorado, where he enjoys the occasional adult beverage.
Read more by Stephen Green
Tags: CNN COVID-19 INSANITY WRAP