Welcome to Insanity Wrap, your daily dose of the best of the worst. Racist cranes are today’s big bad.

See, the good thing about having THIRTY HOMICIDES during a weekend of looting and riots is the *next* year you can claim "crime is down!" #Chicago pic.twitter.com/1ykDsRfRVe

It does have a certain logic to it, Insanity Wrap is forced to admit, particularly when you’re a Blue City Dem like Lori Lightfoot with absolutely no record of note aside from her intersectionality.

As CWB Chicago also noted, “If it weren’t for the complete massacre that the city experienced during last May’s riot weekend, May 2021 would have easily exceeded May 2020’s numbers.”

Insanity Wrap would advise the last sane person to leave Chicago to turn off the lights, except we’re sure the lights will have gone out first.

Such lovely people, cashing in on a despicable trend — but good on LEOs for taking a stand:

“It has come to my attention that your website is selling tee-shirts (sic) and other items emblazoned with the words ‘Blue Lives Murder,’” the letter read. “It’s disheartening that your company would allow this disgusting motto on your sales platform.”

The letter further demanded that the online retail outlet immediately remove the items, arguing that the phrase’s “only purpose is to invite further division, hatred, and violence toward the hard-working men and women of the nation’s Police Departments, who are toiling every day to keep their communities safe.”

The biggest murderer of black lives is black criminals.

This makes Insanity Wrap today’s craziest person in the world for even thinking of selling “Black Criminals Murder Blacks” t-shirts on Amazon.

Partly because you know there’s no way Amazon would allow it, but mostly because — unlike the “Blue Lives Murder” macabre-capitalists — we feel a little sick to our stomach at our own thought.

Your Occasional Reminder That People Are Basically Decent

When you see a lemonade stand, it's hard not to stop. These bikers decided to bring the local stand some business during their ride!

Insanity Wrap blew past a lemonade stand a few days ago… because we didn’t have any cash on us. Not even enough change in the center console.

The next day we hit an ATM because we aren’t making that mistake again.

Had COVID? You’ll probably make antibodies for a lifetime

Today’s brief moment of sanity isn’t another political item — we aren’t miracle workers, you know — but it ought to provide you, gentle reader, with some small measure of relief:

The study provides evidence that immunity triggered by SARS-CoV-2 infection will be extraordinarily long-lasting. Adding to the good news, “the implications are that vaccines will have the same durable effect”, says Menno van Zelm, an immunologist at Monash University in Melbourne, Australia.

Antibodies — proteins that can recognize and help to inactivate viral particles — are a key immune defence. After a new infection, short-lived cells called plasmablasts are an early source of antibodies.

Between this news and the various Operation Warp Speed vaccines developed under the Trump administration — now in over 100 million U.S. arms — this pandemic is basically over.

We might still need boosters against Wuhan flu variants, but the study notes that they only “dampen” the effectiveness of previously developed antibodies.

Keep protecting the vulnerable because no one wants to be a Cuomo, but other than that, we’re good.

Racist Cranes: Another Damn Thing We’re Supposed to Be Concerned About

Video courtesy of Fox 61 can be seen here of the cable about which some say, “As a Black man? That’s a noose. Period.”

Sometimes a crane cable is just a crane cable, as Insanity Wrap is certain Freud must have said at some point.

Freud also did a lot of cocaine, so he said a lot of stuff — much of which he probably didn’t remember.

Still, there isn’t enough cocaine in the world for this story to make sense:

A construction company building a parking structure at Central Connecticut State University had hoisted an American flag at the end of one of its steel cable loops to mark Memorial Day — but a complaint that the cable was a noose prompted campus officials to apologize and pledge to take down the cable as soon as possible.

It gets — if this is even possible — worse.

School president Zulma Toro wrote in a campus-wide email, “Quite frankly, I think it is reckless and tone deaf behavior,” even though in the very same note she admitted that police had “investigated and found that it was not a noose but a standard steel cable loop hanging from a crane.”

Vice President for Student Affairs John Tully went on, oh my did he go on: “The perception of its noose-like appearance is concerning. We were speaking to people last night who certainly felt some pain, we feel that pain, our president has issued a statement expressing her concern about this and we are working diligently to get it down.”

Yes, it’s quite concerning when loops form out of loop-friendly materials like cable.

Insanity Wrap ties our shoes with double loops, which when you consider that we wear two — yes, two! — shoes at a time, makes us four times as racist as a construction crane.

Which is to say: Not at all.

Once again: If you have to find racism in everyday objects, you haven’t found any racism. 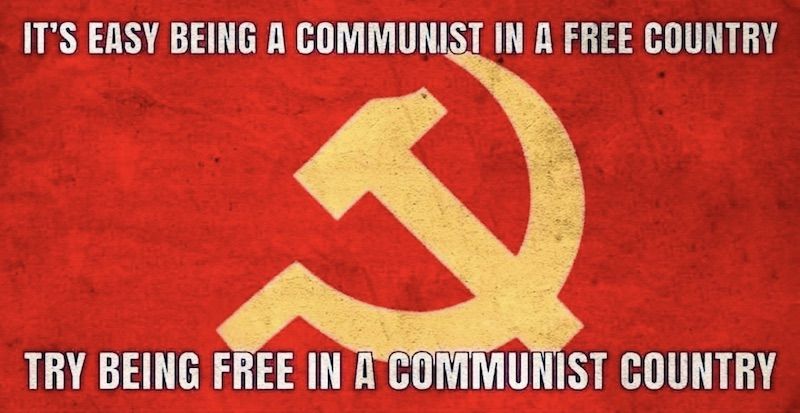 The irony of capitalism is that it produces so much wealth that even damn commies can get rich.

Steve launched VodkaPundit on a well-planned whim in 2002, and has been with PJ Media since its launch in 2005. He served as one of the hosts of PJTV, a pioneer in internet broadcasting. He also cohosts "Right Angle" with Bill Whittle and Scott Ott at BillWhittle.com. He lives with his wife and sons in the wooded hills of Monument, Colorado, where he enjoys the occasional adult beverage.
Read more by Stephen Green
Tags: RACISM INSANITY WRAP COVID VACCINE