Insanity Wrap #164: The Racist Ice Cream Horror Has Been Eliminated

Insanity Wrap needs to know: Why hasn’t the press asked the president if his ice cream represents white supremacy?

Answer: Sorry, we forgot Donald Trump is no longer the president.

Unilever just announced it’s removing the word ‘normal’ from all products to ‘champion a new era of beauty which is equitable and inclusive.’

The thing about beauty is that it’s neither equitable nor inclusive, although beautiful people can be. In fact, we normals tend to think more highly of beautiful people who don’t let their inequitable and non-inclusive looks go to their heads.

There’s nothing “normal” about people who both look graceful and act graceful — and thank goodness for that.

But Insanity Wrap is probably reading too much into a graceless marketing decision.

Unilever certainly understands that in today’s culture, nobody wants to admit to being normal.

We’re all special. Somehow. So we can’t go around using some face soap that says “For Normal Skin” on the label.

Antifa set fire to the federal courthouse in downtown Portland. There are people inside. #PortlandRiots #antifa pic.twitter.com/9sxBZkDe2t

You wanted an insurrection, Democrats — well, you’ve had several in your own cities for almost a year now.

Joe Biden’s Stimulus Speech Was a Complete and Total Failure

Insanity Wrap tried to watch the speech, we really did.

…the Creep Factor was up to 11, and that’s without the presidentish doing any inappropriate hair-sniffing.

So today’s craziest person in the world is anyone who managed to watch the thing, although we do admire your fortitude.

An ice cream brand called Brigham’s Ice Cream quietly changed the name of one of its flavours after social media outrage over the use of a topping called “jimmies.” The woke-o-haram took offence at the term over its potentially racist origins.

Started in New England in 1914, Brigham’s Ice Cream previously included a flavour called “Just Jimmies.” It changed the flavour name to “Just Sprinkles” at some point in 2020.

Insanity Wrap hopes that clears things up for you and for the confused folks at Brigham’s.

Previously On Insanity Wrap: Biden Has Lost Total Control of the Border, White House in Denial

These "fact checks" feel more juvenile and petty every day. Trump only left office months ago. How in the hell do you need to FACT CHECK something that literally just happened in front of all of us? And why do you need the "but"? Fact or no? That's it. https://t.co/ggM12X4sJl

Kira Davis has long been one of Insanity Wrap’s go-to people when we need a little sanity, and today is no exception.

Fact-checking the fact-checkers could become a full-time job for every single unemployed person in this nation, and still have a backlog of fact-checks in need of a good fact-check after putting in a full year of 60-hour workweeks. 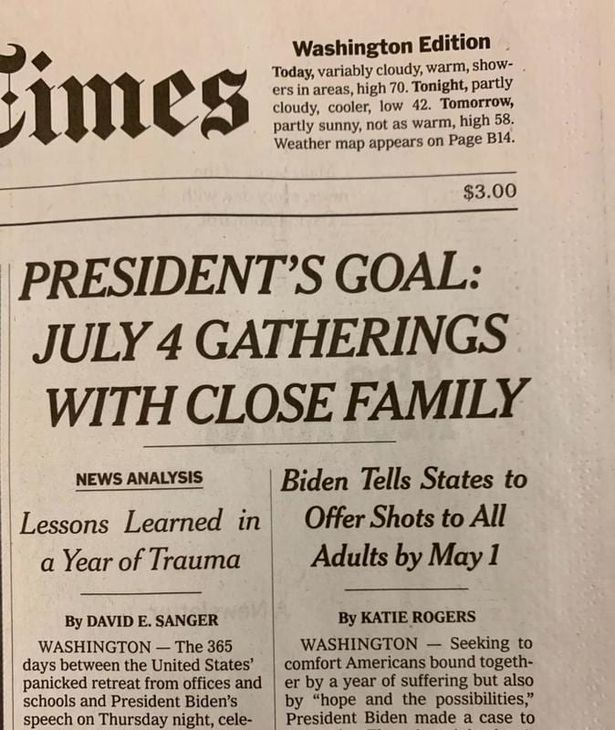 Wait, what? ‘We need everyone to get vaccinated…and keep wearing the mask.’ Why? If everyone is vaccinated why wear a mask? By this metric when are we ever to stop wearing masks? What science did Biden link to this bizarre demand?

President Porchlight has his opinion and we have ours. Let him try to enforce his.

We Interrupt This Panic-Mongering…

Jim Geraghty reports the latest COVID-19 facts and figures, for those shrinking numbers of us who still care about such things.

Thankfully, we’re already seeing results. Our seven-day rolling average of daily new deaths hasn’t been this low since November. The week of December 20, the U.S. had more than 33,000 cases of COVID-19 in nursing homes, and more than 6,000 deaths. The week of February 28, we had just 1,463 cases and 763 deaths.

But it does the soul a lot of good to read it, yes?

***Attention Wayne Hills Residents***
PORTSMOUTH OHIO
Please stop throwing beer bottles at the drones. They are property of Portsmouth Police Department and they run surveillance on the property for your protection. We repeat, STOP KNOCKING DOWN OUR ANTI-DRUG ACTIVITY DRONES! pic.twitter.com/QaCUl6mDeM

Insanity Wrap was unable to verify whether this is real or spoof, but we’re sitting here practically vibrating at the prospect that it might be real.