Answer: Neither does Hillary, but that won’t stop her from trying to take the moral high ground once the wine kicks in.

I am legitimately shocked by this:@GeraldoRivera live on Fox News making excuses for Cuomo’s serial sexual assault/harassment by saying: “He’s a 63 year old, single guy, living in Albany, the most boring town in America. He’s all by himself”

It does make Insanity Wrap wonder what Rivera — purportedly a Republican — was thinking here.

When your opponent is on the ropes like Andrew Cuomo is, you keep landing body blows until they either go down or throw in the towel.

What you don’t do is offer them breathing space, like Rivera just did.

Granny-Killer Cuomo is in a three-way tie for Worst Governor in America (Who Just Happen to All Be Democrats).

Any journalist worth their salt ought to be proud to have Cuomo’s scalp in their trophy collection.

Insanity Wrap wanted “this f****** guy,” as they say in New York, impeached for contributing to the deaths of thousands of nursing home residents, but if this is what ends his sordid political career, so be it.

This Is an Actual Headline 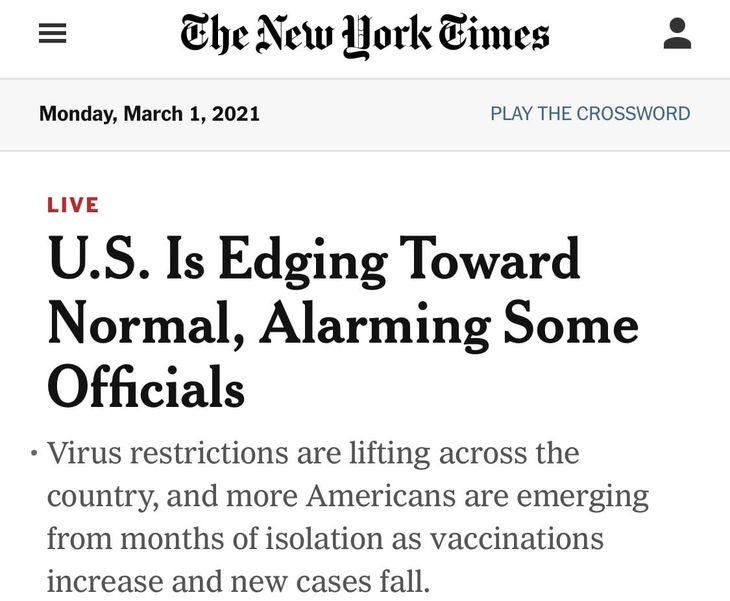 It’s Hillary. It’s probably always Hillary if we’re talking about the craziest person in the world.

After an adult lifetime spent ignoring her husband’s sexual predations or attacking his victims, Clinton now says that reports about Andrew Cuomo are “difficult to read,” and that “the allegations brought forth raise serious questions that the women who have come forward and all New Yorkers deserve answers to.”

Insanity Wrap is generous enough to admit that Clinton’s written statement, while excruciatingly hypocritical, is at least a step up from the Franzia-fueled videos she spent the lockdown period releasing from her basement.

However, the story notes that “Despite the accusations, Clinton and other prominent Democrats — Sen. Elizabeth Warren, D-Mass., and Vice President Kamala Harris — refrained from publicly commenting on the issue.”

What’s the rush? It isn’t like the press will hound Clinton or anyone else about Cuomo, even though it’s safe to assume that just like Jeffrey Epstein this is yet another instance of “everybody knew.”

Insanity Wrap’s rule for interviewing politicians is this: Whatever it is they don’t want to talk about is the only thing one should ask them about.

That goes for members of both parties… or at least it ought to.

Former CIA Director John Brennan says that he is "increasingly embarrassed to be a white male these days." pic.twitter.com/vuVrO3uLu4

To be fair, he does make the rest of us look bad.

My Ancestors Were Slaves. Here’s What I Think of Reparations.

Star Parker has a message on reparations, but it’s really for anyone of any color:

My ancestors were slaves. And my life as a young woman was a mess.

Was my life a mess because my ancestors were slaves? I don’t think so.

My life was a mess because I lived a wanton, irresponsible existence, defined by promiscuity, petty crimes, and scamming the nation’s well-meaning but totally confused welfare system to the greatest extent of my ability.

Did I need reparations to turn things around for me? Certainly not. I needed a wake-up call, which, to my great gratitude, I got from a few church-going black Christians who told me the way I was living was unacceptable.

I went to church, took back responsibility for my life, and turned my circumstances around.

The problem with the idea of reparations is it redirects attention away from exactly where attention is needed: on individuals’ personal responsibility for their own unique lives.

You probably don’t need Insanity Wrap to tell you that if throwing money at problems solved problems then we would have long ago run out of problems to throw money at.

Even if we hadn’t later learned that Cuomo was more of a hands-on creeper than a hands-on governor, who the hell gets turned on by a politician’s press conferences during a pandemic?

Never mind. Insanity Wrap knows the answer, but we’re going to have a second Bloody Mary and pretend that we don’t.

As a longtime resident of southern Colorado, which remains somewhat sane and well-run, Insanity Wrap can tell you with confidence that down here (and out on the Western Slope, too) Coloradans do our best to ignore the latest nonsense coming out of the All-Knowing All-Powerful Denver/Boulder Axis.

But now Gov. Polis has gone too far:

The Polis proclamation is taken nearly word-for-word from the radical vegan Farm Animal Rights Movement’s (FARM) MeatOut.org website, and recites a litany of supposed evils of meat and benefits of a vegan lifestyle and even invokes “reducing our carbon footprint” and preventing animal cruelty. According to FARM, its mission is to end the use of animals for food.

Polis does give a nod to agriculture, noting that “Colorado is the proud home to farmers and ranchers alike and we recognize the importance of agriculture in the state.” But this didn’t blunt the ire of Colorado legislators, agricultural producers and county commissioners over the potential economic harm Polis may have triggered.

The biggest problem with Polis is that he just isn’t that bright.

What we mean by that is, he seems to very sincerely believe the last thing somebody told him. Tomorrow, he might issue an EAT MOAR MEATS, ALL TEH MEATS proclamation, assuming that this afternoon he speaks to a cattle rancher with a cruel sense of humor.

However, the Polis coterie consists of almost nothing but the wokest of the woke, so we’ll keep having to ignore the political tofu force-fed to him by Farm Animal Rights Movement and other hard-left organizations.

Nope, still not tired of these Coke memes.

Previously On Insanity Wrap: Who Is Doing Dementia Joe’s Thinking for Him?