Insanity Wrap #136: Intriguing - Palm Beach to Decide Whether Trump Can Live in the Building He Owns

Insanity Wrap needs to know: When is the owner of a property merely a guest on that property?

Answer: Palm Beach is going to get back to you on that one.

This is voter suppression and social media will ban you and the FBI will arrest you:

The suspect behind the right-wing Twitter troll account “Ricky Vaughn” was arrested by federal authorities Wednesday for spreading “disinformation” through memes during the 2016 presidential race in an alleged “election interference” scheme to limit black voter turnout.

31-year-old Douglass Mackey is accused of conspiring with others to encourage black voters through social media to cast their ballots via text message. If convicted of the one conspiracy against rights charge, Mackey could be imprisoned for up to 10 years.

Much more at the link.

This is not voter suppression and Twitter is fine with it, and apparently, so is the FBI:

Insanity Wrap hopes this clears things up for you.

“If there is a god, I pray that you all die a horrible death”

Protesters confront police trying to resecure an Olympia, Wash. hotel that was taken over by #antifa. Someone then hits cameraman @jasonrantz: pic.twitter.com/dZfySYOZLx

Meanwhile, in the Pacific Northwest, a months-long and quite genuine insurrection continues, and continues to be largely ignored by the country’s infotainment industry — formerly known as the “Complicit Media,” before that known as the “Democrat-Media Complex,” and prior to that the “Mainstream Media.”

Insanity Wrap is old enough to remember when we just called it “the news.”

Insanity Wrap’s craziest person(s) in the world (today) is anyone trying to tell a billionaire and former president where he may live.

Only days after House Minority Speaker Kevin McCarthy joined President Trump for a meeting at Mar-a-Lago, officials in Palm Beach, Florida, where President Trump, Melania, and their teenage son Barron have moved on January 20, after leaving the White House, are trying to find ways to kick them out of their home.

They argue that staying long-term at the estate violates Trump’s agreement with the town authorizing the club. The agreement prohibits members and guests from staying in the guest suites for more than seven days at a time.

What about the owner?

In the Olden Times — which date all the way back to January 19, 2021 — local officials might quietly make certain adjustments to accommodate a former president.

By going public at all, certain officials are being needlessly partisan and petty, giving lie (once again) to all the “unity” BS we’ve had shoved at our faces these last few weeks.

Promise not to kill yourself after watching this? pic.twitter.com/Bt1EF5O6pO

Insanity Wrap was fortunate enough to receive a heads-up before watching this, so we fortified ourselves with half a Bloody Mary before pressing Play.

Granted, we did mix a double.

Is half a double one regular?

Sorry, we got lost in a tangent for a moment there.

In any case, Insanity Wrap very nearly headlined this item “The Absolute Very Worst Thing You’ll See All Week,” but we’ve learned better than to tempt 2021 that way.

Exit Question: We’re in for a minimum of four years of treacly celebrity Dem worship, aren’t we?

Jared Kushner, the White House adviser under former President Trump, was nominated Sunday for the Nobel Peace Prize over his efforts in negotiating deals between Israel, the United Arab Emirates and other countries in the region over a hectic four-month period last year.

Reuters reported that Kushner and Avi Berkowitz, his former deputy, were nominated by Alan Dershowitz, the professor emeritus of Harvard Law School. Reuters called the deals the “most significant diplomatic breakthroughs in the Middle East in 25 years,” and many Trump supporters said the media downplayed their magnitude in order to hurt his chances at reelection.

Barack Obama had (just) enough decency to seem vaguely embarrassed when he was given the Nobel Prize for Peace as some kind of participation trophy.

The Nobel Committee ought to be embarrassed if they allow Trump Derangement Syndrome to prevent them from doing the right thing regarding the Abraham Accords.

Insanity Wrap isn’t crazy enough to think they will, however.

Many Russian cities are like militarised fortresses today, as authorities try to thwart a second protest wave.

California storm washes out part of Highway 1 near Big Sur

This is not the big deal you might think it is.

Years and years ago, Insanity Wrap’s own mother moved to the far northern reaches of California.

Scenic Eureka, Calf., to be exact. “Behind the Redwood Curtain,” the locals called it.

When we flew out for our first visit, she advised us to look into booking a connecting flight from San Francisco instead of making the five-plus hour drive north from the Bay Area.

“Because sometimes the roads fall off.”

Our Midwestern sensibilities were flummoxed: “The roads fall off of WHAT?”

So, yes, when you build a highway on a muddy slope just above the ocean in a place with lots of rain, sometimes the roads fall off. 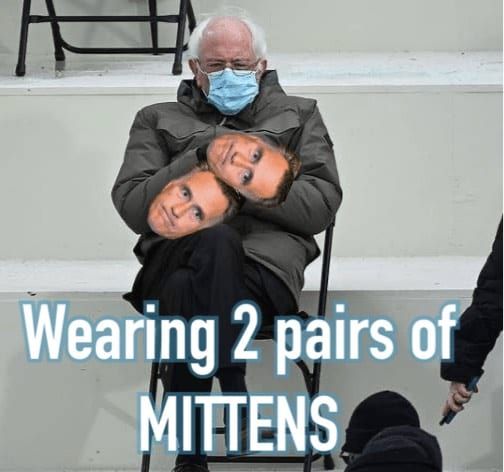 Finally, a use for Mittens.

Previously On Insanity Wrap: Sheila Jackson-Lee Will Decide if You’re Sane Enough to Buy a Gun

Steve launched VodkaPundit on a well-planned whim in 2002, and has been with PJ Media since its launch in 2005. He served as one of the hosts of PJTV, a pioneer in internet broadcasting. He also cohosts "Right Angle" with Bill Whittle and Scott Ott at BillWhittle.com. He lives with his wife and sons in the wooded hills of Monument, Colorado, where he enjoys the occasional adult beverage.
Read more by Stephen Green
Tags: JARED KUSHNER INSANITY WRAP NOBEL PEACE PRIZE