Insanity Wrap #79: How Many Kids Can Antifa Threaten to Rape and Murder Before CNN Notices?

Insanity Wrap needs to know: How are you feeling about Trump’s chances tomorrow?

A major benefit to federalism is that it allows safe spaces — if you’ll forgive Insanity Wrap using that horrid phrase — for disagreement.

We’re all much freer to disagree when there isn’t a federal behemoth with enough power to enforce conformity in all things across the entire country.

Washington has, after a century or more of increasingly progressive politics, established enough centralized power that virtually nothing lies outside of Washington’s purview.

What that means is that we’re never more than one election away from tyranny. Today’s Left has shown that they’re unafraid — eager, even — to wield Washington’s anti-federalism powers to silence the opposition.

These kids might or might not understand the threat intellectually, but they sure as hell understand it instinctively.

That’s probably because through the course of their education, they’ve been subjected constantly to the progressive Left’s petty tyrannies.

The idea that the entire country might soon be run like a progressive college campus where free speech and due process are suppressed and subverted ought to frighten these kids.

It sure as hell frightens Insanity Wrap.

We’re sure you have your own reasons to vote for Trump, but the best reason might just be saving these kids from their well-founded fears.

And now, back to your regularly scheduled snark, silliness, and insanity.

Because Chris Cuomo Thinks He’s Better Than You

Wait, is this @ChrisCuomo not wearing a mask while getting a haircut in NYC near 80th & Broadway?!

Would be a shame if everyone saw his hypocrisy pic.twitter.com/xURkPk0Q8t

The pinked-haired protester’s comments drew gasps from other protesters who appeared to be upset by the vitriol of the woman’s statement. One person in the crowd can be heard repeatedly shouting “hey” after she made the comment, while another appeared to cover her mouth in disbelief.

“You’re a f*cking disgrace to society,” the pink-haired protester continued before the video cut off. She appeared to be walking away from the scene as the footage ends.

Kudos to the other antifa for at least being offended.

Still, had the protestors been conservatives or Republicans, Insanity Wrap doesn’t have to tell you that the single “raped and killed” shouter would have made national headlines in all the major outlets.

Also: We’re aware that we posted the “wrong” video, but demon-antifa came across our radar again this morning, and we couldn’t resist publishing the longer version of the clip we posted for you a week or two ago.

Whoever made these is so crazy they’ve come right back around to sane again.

Don’t worry, Joe, you don’t have us or our vote.

See how easy that was?

BIDEN: “I was very happy to have the moniker of being PA's third senator. I married a Philly girl, by the way. And I’ve got my Eagles jacket on."

He is wearing a Delaware Blue Hens jacket.
pic.twitter.com/nOs5FfWo9Q

Insanity Wrap is just thankful that Biden remembered his pants, and we’ll leave it at that.

Previously On Insanity Wrap: Video Proof that Trump Is the Funnest POTUS Ever 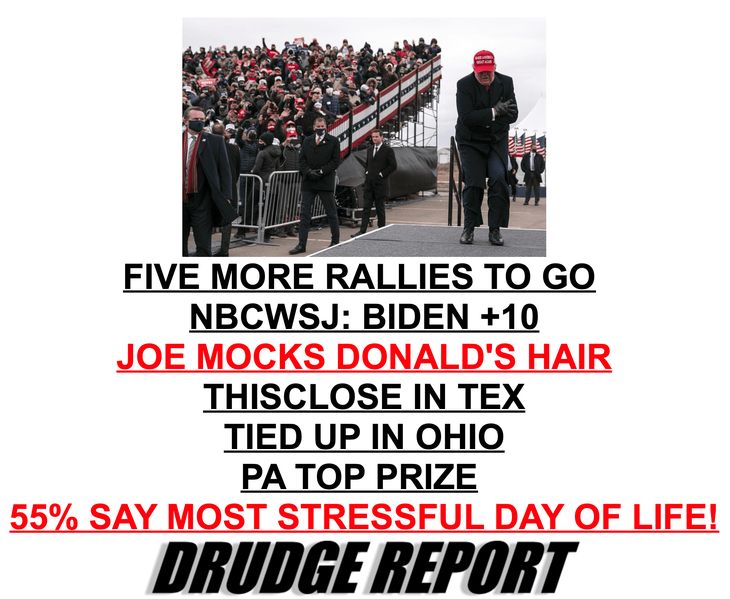 We’re supposed to care what this guy thinks anymore?

It was with great sadness that Insanity Wrap first witnessed that long, slow decline of Matt Drudge’s eponymous Drudge Report.

Not because Drudge changed sides, after having spent so much of 2015-2016 helping Donald Trump win the GOP nomination and then the White House.

That kind of thing happens, and there’s no sense in complaining about it.

But what was sad, what we do lament, is the lost nature of the Drudge Report.

He didn’t add much commentary — usually none — but by the way he selected, placed, and rotated stories, Drudge kept up a running commentary on the news.

A single Drudge link could launch a career.

But in recent years, Drudge doesn’t do much more than headline the conventional wisdom, and parrot whatever the old, established news outlets are saying.

Not just for his former readers, but for Matt, himself:

The Drudge Report posted a 45 percent decline in web traffic in September as the site alienated its core readers by turning against President Trump ahead of the 2020 presidential election.

The data — derived from comScore, which tracks the industry — were released in a report by TheRighting, a website that analyzes traffic to right-leaning websites. TheRighting told The Post that the Drudge Report had 1,291,000 unique visitors in September, according to data supplied by comScore, down from 2,340,000 in the same month a year ago.

Self-inflicted wounds are always the most tragic.

There’s an ongoing discussion in the PJ Media Slack channel about who thinks who will win, and why.

Insanity Wrap has said there, as we’ve said as Stephen Green at BillWhittle.com and as VodkaPundit elsewhere here at PJ, that we feel entirely confident that Trump will win — except when we’re terrified that he won’t.

The Confidence-to-Terror ratio has been moving slowly but inexorably in Trump’s favor over the last few weeks.

But in the last week, the terror only comes to us at night when we’re trying to sleep.

Because our brain hates us, apparently.

Videos like the one above, in which the Trump supporter has a (very obviously fake) antifa stuck to his truck’s grill ought to let us sleep just fine tonight.

This is still America, and in America, the side having the most fun almost always wins.

Americans love a winner, General George S. Patton insisted. And Insanity Wrap believes that the winners are the ones who feel and act like winners.