Insanity Wrap needs to know: Why is Joe Biden wandering around, apparently lost, on his own stage?

Answer: Seriously, the video has us even more worried about his brain than usual.

THIS!!! Wait for it 😭❤️😭 pic.twitter.com/RFgzU4wyWm

This is what passes for praiseworthy virtue to the postmodern Left.

They need to be made to feel the pain on Election Day, or this emotional abuse is never going to stop.

Has Covid killed off the flu? Experts pose the intriguing question as influenza cases nosedive by 98% across the globe

Spoiler: The Wuhan virus did not kill the flu.

The disappearing act began as Covid-19 rolled in towards the end of our flu season in March. And just how swiftly rates have plummeted can be observed in ‘surveillance’ data collected by the World Health Organisation (WHO).

Patients aren’t routinely tested for flu, even if it’s suspected, but a number of ‘sentinel’ GP surgeries and hospitals do carry out diagnostic screening on those who have symptoms, and this data gives us the most accurate picture of how much flu is in circulation.

And the figures provide a startling insight into what has become a creeping trend across the world.

Insanity Wrap finds the data compelling: The Wuhan virus did not kill off the flu, but it may have killed off almost all of the people who were going to die of the flu.

Either that, or the lockdowns and increased sanitation stopped the flu in its tracks but were worthless against the Wuhan virus.

Either way, Insanity Wrap is convinced that it’s time to end the lockdowns.

30 police officers were injured overnight in Philadelphia as BLM rioters threw bricks, started fires, & looted stores. One female sergeant was hit by a car & had leg broken. Rioters are angry a black man who charged at police w/a knife was shot dead. https://t.co/QzTdWPNaLt

Chaos reigns as protestors throw rocks and eggs at cars in a "Jews for Trump" rally in NYC. pic.twitter.com/LE24WUic3Q

Insanity Wrap is starting to wonder why we continue this (almost) daily mini-feature.

The rioters and the police certainly know the mostly-peaceful protests are really partly-violent riots.

The only people who don’t know the mostly-peaceful protests are really partly-violent riots are the people least likely to read Insanity Wrap.

If the breathless reporting Mediaite specializes in is anything to go by, apparently Insanity Wrap is supposed to care that Shepard Smith’s new show got trounced by reruns on the Fox Business channel.

For the record, we didn’t care enough about Smith to even joke about such a thing.

But our black little heart is enjoying a little extra schadenfreude in our coffee this morning.

So we have that going for us.

Joe Biden is either crazy or stupid [embrace the healing power of “and” –editor.] for going to war against fracking and even traditional sources of oil during last week’s presidential debate.

So when Insanity Wrap sees energy industry data like Georgia’s, it makes us want to hear even more from Nate Silver about how much Georgia and Texas (and… Pennsylvania?) are in play for Biden.

NOTE: If it turns out we’re wrong on this one, we’re going to have to deeply reexamine our beliefs about the American people. But Silver was wrong — so very wrong, like most other pollsters — in 2016 and doesn’t seem to have reexamined much of anything.

How Much Fun Is This Guy Having?

All the fun. Donald Trump is having all of the fun.

Biden goes on TV with notes or even a teleprompter, yet still gets lost three times in the middle of one sentence.

Here’s Trump winging it in front of a yuge crowd, earning big and genuine laughs like a standup comic with years of experience — no notes required.

And unlike Biden, Trump never gets lost on his own stage.

What Has Been Seen Cannot Be Unseen

The only takeaway I have from this new 60 Min interview with Kamala Harris is who on the Biden Harris Campaign thought these wardrobe colors were a good idea? pic.twitter.com/DSLuhKo5jN

Well, at least the laugh is finally explained.

Another Daily Dose of Schadenfreude 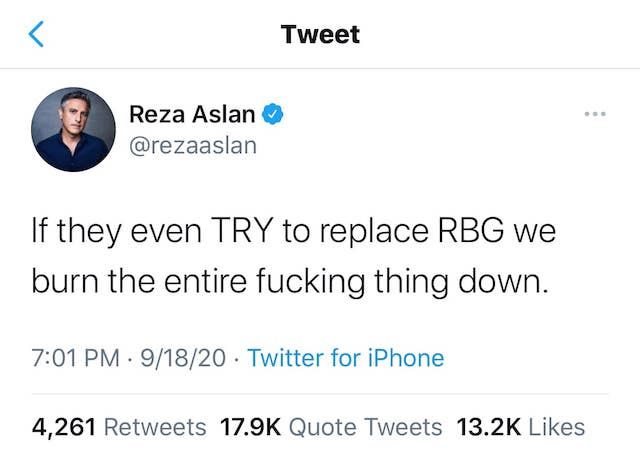 How’d that work out for ya, big guy?

Beauty Is in the Beheld, Bub

Canada Galaxy Pageants, a women’s-only beauty pageant based out of Toronto, Ontario, is facing human rights complaints from self-proclaimed lesbian warrior princess and tech blogger Jessica Yaniv, after not being accepted as a contestant in the pageant’s “28 Years and Older” division.

For the record, Yaniv is a serial harasser of everyday Canadians who may or may not have mental issues driving their bad behavior.

But until they prove that they’re genuinely transgender by getting it snipped, Insanity Wrap will remain convinced that he is nothing more than a bully who found a unique outlet for his cruelty.

They Hate You, They Really Hate You

All they have to do rake in millions of dollars is play their games and then sometimes say polite and humble things into the TV camera, just like Crash Davis taught them.

They have to hate us, instead, while playing their games and raking in millions of dollars.

Insanity Wrap would like to remind our betters in the NFL/NBA/etc. that being in popular entertainment requires staying popular.

Hating on the people who buy the tickets and the overpriced snacks and watch the TV commercials is not a sustainable business model.

AKA: Get woke, go broke.

We just wish the going broke part would happen a little faster.