Insanity Wrap needs to know: Is it transphobia when the police arrest a trans Muslim person for throwing incendiary devices at police while carrying a semiautomatic rifle at a partly-violent riot?

Answer: Of course it is, hater.

If they won’t fully reopen schools, despite what science says, when will they?

The Party of Science™ looked at the science and said, “Nah, brah.”

Last week, some fantastic news from the science world should’ve given full-time-schooling advocates real hope. Instead, officials are signaling that we may never return to full in-person learning, at least not like pre-COVID.

A New York Times piece, “Schoolchildren Seem Unlikely to Fuel Coronavirus Surges, Scientists Say,” concluded that, yes, the science says kids should be in school. “The bulk of evidence now suggests only limited transmission from young children to adults.”

That evidence, of course, has existed for months, but the Times piece brought it home for nonbelievers.

Alas, the science doesn’t matter; we left it behind long ago. Instead, we’re seeing signs that schools may not open for full-time learning for years, if ever — and many of our leaders seem OK with that.

New York Mayor Bill de Blasio won’t fully reopen the schools for the same reason Jame Gumb (aka “Buffalo Bill”) couldn’t and wouldn’t stop himself from killing over and over again: “He’s got a taste for it,” as Clarice Starling correctly noted about a more obvious sociopath.

“It” is untrammeled political power.

Insanity Wrap posits that de Blasio gets away with it because New Yorkers let him get away with it.

‘Kamala’ Is the Sanskrit for ‘Deer in the Headlights’

Did Kamala Harris not anticipate and prepare for this question?pic.twitter.com/XNGr0F1Mdy

A couple of thoughts, one petty.

First, Harris is not skilled at looking like the other person is in the room with her. That takes practice, and clearly she hasn’t put in the time.

Exit Question: Why should Kamala Harris bother prepping, when she knows she has a permanent “bye” from the Infotainment Industry? 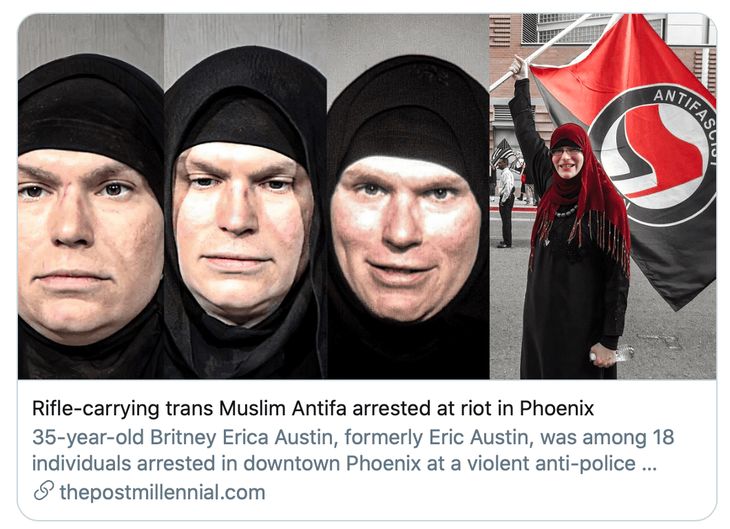 So much news in one short headline, but Insanity Wrap can’t stop reading the second graf:

35-year-old Britney Erica Austin, formerly Eric Austin, was among 18 individuals arrested in downtown Phoenix at a violent anti-police protest. Austin was covered head-to-toe at the time in a black abaya, or women’s Islamic robe, and a burka.

Wales went under Double Secret Lockdown last week, and the list of things people aren’t allowed to buy draws a strange line between “essential” and “nonessential.”

The Welsh Government’s ‘non-essential’ items ban has been in place since Friday with increasingly absurd tales of implementation. This morning Tesco tweeted, “we have been told by the Welsh Government not to sell [the sanitary products] for the duration of the firebreak lockdown”. The Tesco St Mellons Superstore in Cardiff has closed off an aisle containing items deemed ‘non-essential’ including sanitary products and toothpaste…

Elsewhere in Wales, Spar has reportedly refused to sell face masks as they are “non-essential“. At least that’s one way to keep people out of shops so they can’t tweet about the ridiculous ‘non-essential’ sale ban.

Very quickly, a Welsh government spokesweasel denied that any such order had been given. “This is wrong – period products are essential. Supermarkets can still sell items that can be sold in pharmacies,” they said.

Yes, but the lockdowns have been so arbitrary and the fines so onerous that stores like Tesco and Spar have been playing it safe.

Dr. Insanity Wrap looks at the sickness befallen the United Kingdom and prescribes a hearty dose of tar and feathers.

Good News: Britain Hasn’t Gone Entirely Over to Airstrip One

What Is Mark Knoller Trying to Say Here?

Senior Administration Official says Pres Trump showed his passport when he went to vote today in Florida. Later, at his NC rally, he made the case for requiring VOTER ID in order to cast a ballot.

Is Knoller — a Blue Checkmark Credentialed™ member of the CBS Infotainment Complex — trying to imply that Trump is a hypocrite? Is Knoller trying to say that no one should have to present ID? Or is Knoller perhaps unaware that a U.S. passport is pretty much the “highest,” hardest-to-fake personal identification an American citizen can carry?

The most generous interpretation Insanity Wrap could come up with is that Knoller believes his audience is made up largely of ignoramuses who will believe any Orange Man Bad implication, even when it makes no sense whatsoever.

And you know what? He’s probably right.

Megyn Kelly joins the backlash against California Gov. Newsom’s Thanksgiving insanity that requires families to celebrate outside, wear masks when not eating and only spend two hours together

California First Comrade Gavin Newsom has decreed that you may freely celebrate Thanksgiving.

With certain restrictions for the benefit of all citizens, of course.

Here are the First Comrade’s instructions to you on this glorious day of freedom:

Insanity Wrap is not making any of this up, although we did dress up the language for comedic effect.

These are in fact First Comrade Newsom’s orders.

Megyn Kelly is having none of it, and has taken to Twitter to protest the First Comrade’s beneficient diktat for this year’s free celebration of Thanksgiving.

We hope she enjoys her 5-gram turkey ration at the First Comrade’s reeducation camp, up from last year’s 8-gram ration.

You Can’t Get More Generic Than Barely Extant

If you ever wondered how “Generic Democrat” would perform in a real election we are about to find out. Both the P/VP nominees have been the most absent, vague, unchallenged nominees in history. By and large they can be whoever you think they will be. https://t.co/fAM1kpLAyt

Steve launched VodkaPundit on a well-planned whim in 2002, and has been with PJ Media since its launch in 2005. He served as one of the hosts of PJTV, a pioneer in internet broadcasting. He also cohosts "Right Angle" with Bill Whittle and Scott Ott at BillWhittle.com. He lives with his wife and sons in the wooded hills of Monument, Colorado, where he enjoys the occasional adult beverage.
Read more by Stephen Green
Tags: KAMALA HARRIS INSANITY WRAP