Insanity Wrap needs to know: What does it take to kill the phony Russian collusion narrative?

Well, like Christopher Lee’s Dracula at the start of yet another low-budget Hammer Film Productions horror movie, the Russian collusion narrative is back by yet another outrageous contrivance.

When the New York Post published the alleged contents of a computer hard drive purporting to document the Ukrainian and Chinese business activities of Hunter Biden, the newspaper cast the information as a “smoking gun.”

Less than three weeks before one of the most contentious presidential campaigns in history, federal authorities are investigating whether the material supplied to the Post by Rudy Giuliani, President Donald Trump’s personal lawyer, is part of a smoke bomb of disinformation pushed by Russia.

They’re gonna find the Russian collusion for real this time.

Keep digging through that manure, fellas — you’re bound to find Trump riding a Russian pony under there somewhere.

What Did We Just See?

If we lose to these people, that’s entirely on us.

What we have here for you today is an entirely peaceful protest.

And for once it’s a protest against overweening government.

In addition to the budget cuts, Seattle has been increasingly unsupportive of its police department following the nationwide Black Lives Matter movement to defund and abolish the police, borne from the death of George Floyd in late May.

Based on information provided by sources in the Seattle Police, Rantz reported that in September alone, 39 officers either retired or resigned from the department.

These retirements and resignations are just the tip of the iceberg, and come before (and on top of) however Seattle implements its cuts to the local police.

Insanity Wrap doesn’t have to tell you that this will end badly.

What Did We Just See? Part II 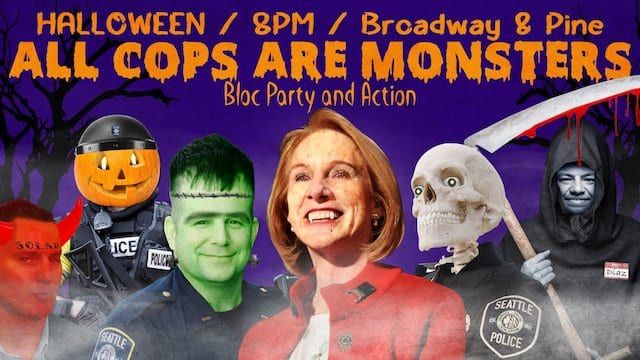 On the off chance kids are actually allowed to trick-or-treat in Seattle this year, antifa is going to ruin that, too.

Insanity Wrap has very little left to say other than: Screw these guys.

An oil tanker with 50-60 million gallons of oil is currently sinking in the Gulf of Paria. That's 5x more than the Exxon Valdez spill.

The Venezuelan government is denying any problems. If the world doesn't act now, this will be one of the biggest disasters ever. pic.twitter.com/M9oqt2VSXJ

The Left will turn against the socialist Maduro government in…

Tom Lehrer once joked that the problem with folk music is that it’s written by… the people.

Insanity Wrap could say the same thing — but with all due seriousness — about Wikipedia.

Wikipedia’s current entry for Hunter Biden contains this gem in the third sentence: “He and his father have been the subjects of debunked right-wing conspiracy theories pushed by Donald Trump and his allies.”

By whom? When? And why hasn’t Joe Biden or anyone in his campaign disputed the evidence?

Whatever else you do this year, don’t give money to Wikipedia.

The Stakes on November 3

Big Tech is brazen now with political bias and election interference because they know any legal or legislative action taken won’t have any effect until after November 3.

If the Democrats win, Twitter and Facebook will enjoy continued immunity and protection under Section 230 of the CDA — and enjoy an enlarged role as the social media arm of the Left’s 24/7/365 propaganda machine.

Insanity Wrap isn’t sure the Republicans could win another election after that, so vote as though multiparty democratic republicanism is on the line.

China demanded a French museum to remove the words ‘Genghis Khan’ from a Genghis Khan exhibition, as it continues cracking down on Mongolian culture

A French museum was forced to postpone its exhibition about the Mongolian warlord Genghis Khan after Chinese authorities demanded control over many elements, multiple reports say.

The Chinese Bureau of Cultural Heritage asked the museum to remove the words “Genghis Khan,” “empire” and “Mongol” from the show, the museum’s director said in a statement seen by the Associated Press.

This is a French museum in France, not some international display currently moving through China or anything like that.

Nevertheless, the Chinese Communist Party believes it has enough heft — ie, muscle and money — to force a French museum in France to whitewash one of China’s great enemies out of Chinese history.

And the Left says it’s the West — particularly Ameria — engaged in “cultural imperialism.”

The fact is, other cultures want to emulate American culture.

Not because we make them do it, but because they want to do it.

Because American culture is fun.

We gave the world disco, too, but Insanity Wrap is done apologizing for that, considering how young we were at the time.

But mostly, we make the fun stuff people want to listen to and watch and read for no better reason than they’re fun.

Whatever you want to call it, that isn’t imperialism.

What Communist China is doing, is.

Good reminder that it’s October 19th and Florida STILL has less than half the total COVID deaths than New York and media is interviewing this jackass about advice instead of Ron DeSantis. https://t.co/yOsqojkAz1

Apparently, we’re still supposed to care what Granny Killer Cuomo™ thinks about anything, but Insanity Wrap is so done with that.

Not that we ever started, mind you.

Steve launched VodkaPundit on a well-planned whim in 2002, and has been with PJ Media since its launch in 2005. He served as one of the hosts of PJTV, a pioneer in internet broadcasting. He also cohosts "Right Angle" with Bill Whittle and Scott Ott at BillWhittle.com. He lives with his wife and sons in the wooded hills of Monument, Colorado, where he enjoys the occasional adult beverage.
Read more by Stephen Green
Tags: ANTIFA INSANITY WRAP HUNTER BIDEN