Insanity Wrap needs to know: Could we maybe get just one debate with a moderator who isn’t a partisan Democrat swamp creature?

Answer: No. Don’t be silly.

PA restaurant that re-opened found NOT GUILTY, will not have to pay fines

Actually, a little sanity might just be creeping back into our insane world.

Insanity Wrap found this bit of good news out of Pennsylvania:

Their lawyer, Eric Winter, told the Daily Caller that Governor Tom Wolf and the Department of Health’s Orders couldn’t be punished under Pennsylvania criminal law.

Speaking to the Caller, he said “It is very questionable as to whether the law allows the Department of Health to issue orders as it did. It is not possible for a criminal penalty to be imposed for violating the orders.”

Michael Mangano continued, “The mask mandate, the plexiglass, the social distancing, all of those things that the governor and [Secretary of Health Rachel] Levine were implementing are not an enforceable citation,” He said. “In other words, they can’t legally enforce that. This says that any fine that you get from the state is legally non-enforceable.”

It isn’t just that the restaurant owners were found not guilty. It’s that the entire class of extra-constitutional administrative “offenses” with serious crime-sized punishments may be safely ignored by the still-free people of Pennsylvania.

Now let’s do the other states.

This is the 7th statue in Portland to be toppled or severely damaged. pic.twitter.com/JvHzlFha6v

No arrests have been made for any of these acts of destruction.

You’re a Democrat. It’s okay to admit it.

There are only two reasons Insanity Wrap can think of to be a closeted Democrat:

Or maybe this is one of those cases where Insanity Wrap needs to embrace the healing power of “and.”

She said VP of Drip 💧 pic.twitter.com/ahUzMbFUFC

Joy Behar Thanks Jeffrey Toobin For Distracting From Trump

When I heard this yesterday, I said, ‘Thank you, Jeffrey, for giving us something else to talk about besides Trump and this pandemic.’ In that way he provided a public service. I could do ten jokes here. I’m not going to.

Behar is only kinda-sorta right.

In other words, the topic of conversation shifted from one horrible lefty to a different horribly lefty.

If Behar thinks that Toobin in any way, however briefly, made decent Americans think better of our corrupt and decadent ruling class, Insanity Wrap will buy each of them a steak dinner.

What Has Been Seen…

Insanity Wrap understands passions are hot in the weeks before Election Day, so here are a few helpful tips to get everyone through without doing anything too stupid.

We hope that helps.

If not, maybe this next bit of advice will.

Did you know security on those things has been terrible, even for people who do wear clothes outside?

The Chinese knew about Naked Yard Sign Man before his victims did.

Anyway, whoever our mystery naked yard sign stealer is, we know this much about him for sure: He’s no Jeffrey Toobin. 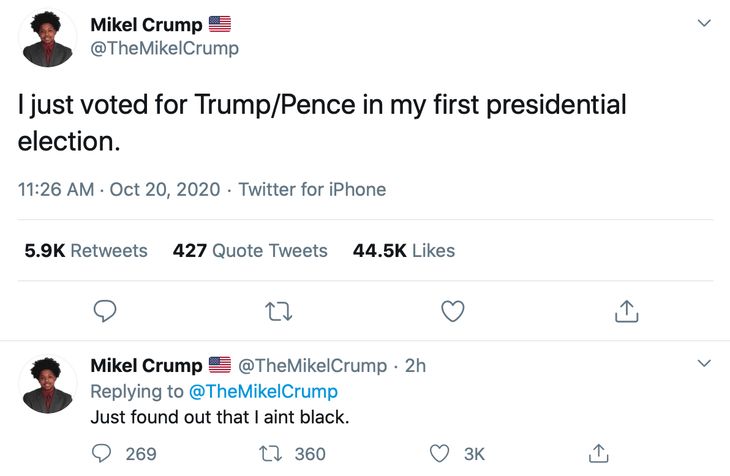 Kristen Welker, the Next Debate Moderator, Got Busted Tipping Off Team Hillary in 2016

Just a friendly reminder from the good folks at The Western Journal:

Next up to the plate when it comes to debate moderators is Kristen Welker, an NBC News White House correspondent. Welker is in charge of questioning during this week’s debate, scheduled to begin at 9 p.m. Thursday at Belmont University in Nashville, Tennessee.

Now, remember, Steve Scully — a soporific non-entity for the oatmeal of cable political channels, a man even C-SPAN watchers could only probably identify after they were told he’s the one that kind of looks like Lindsey Graham if you squint — turned out to be a biased mess. Welker is a reporter for the most left-leaning of the major broadcast networks in an era where White House correspondents are expected to behave in the combative mold of Jim Acosta. What are the odds she turns out to be less partisan?

Less? Insanity Wrap is here to tell you she’ll be more nakedly partisan than Chris Wallace.

It could be worse. The Commission could have gone with Hunter Biden instead of Welker.

Welker, famous for tipping off Hillary Clinton’s spokeswoman on camera about a question she would ask during an interview, briefly deactivated her Twitter account in the wake of Scully’s scandal.

You don’t need Insanity Wrap to tell you that the fix is in, courtesy of the Commission on Presidential Debates, aka Swamp Thing.

But there’s plenty of time to ax the Swamp-approved Commission before 2024, and replace it with a debate format that’s both fairer and more substantive.

There’s a lot to overcome between now and Election Day, including the formerly liberty-loving internet.

But keep your chins and enthusiasm up just like you have the last four years, and Insanity Wrap believes everything will be all right.

Steve launched VodkaPundit on a well-planned whim in 2002, and has been with PJ Media since its launch in 2005. He served as one of the hosts of PJTV, a pioneer in internet broadcasting. He also cohosts "Right Angle" with Bill Whittle and Scott Ott at BillWhittle.com. He lives with his wife and sons in the wooded hills of Monument, Colorado, where he enjoys the occasional adult beverage.
Read more by Stephen Green
Tags: 2020 PRESIDENTIAL ELECTION DEBATES INSANITY WRAP