Insanity Wrap needs to know: When is an endorsement an act of cruelty?

Answer: When it comes from Barack Obama.

Be careful out there.

Insanity Wrap would hate for any additional people to get hurt by all the peacefulness.

Insanity Wrap has long suffered from insomnia, but we’re not going to lose any sleep over this:

We have surveyed a sample of 73 journalists from international news organisations, who in June 2020 were asked to answer a set of questions on their working conditions and emotional state. All journalists have worked on stories directly related to the pandemic. The survey had a 63 percent response rate.

The majority of our respondents, around 70 percent, suffer from some levels of psychological distress and responses suggest that 26 percent have clinically significant anxiety compatible with the diagnosis of Generalized Anxiety Disorder which includes symptoms of worry, feeling on edge, insomnia, poor concentration and fatigue.

The takeaway here is that a very small number of whiners (about 32 people, if you do the math as Insanity Wrap did) complained to an even smaller number of whiner-enablers, and this was somehow worthy of a Reuters writeup.

We’ve been covering the news in one form or another on and off (but mostly on) since 1988, and the worst we ever suffered was the need for an extra martini at the end of the day.

Highly recommended, even when you don’t need it.

1. BLM began to aggressively escort a man from the BLM protest then assaulted him

2. A witness defended him verbally, then BLM thugs began to threaten, rob and physically assault her pic.twitter.com/5kXPVNp0GA

#ProTip: Harassing people is not a right protected by the Constitution.

Don’t Be That Guy

Firefighters smash windows of BMW parked in front of hydrant

For once there’s plenty of parking in Manhattan (more on that momentarily), and yet some jerkweasel felt the need to park in front of a hydrant.

A BMW owner learned the hard way why it’s never smart to park in front of a New York City hydrant — after a blaze broke out nearby and Bronx firefighters busted two of his windows to run their hose.

Firefighters came across the offending 2005 5-Series sedan after rushing to a burning three-story building at Holland Avenue and E. 212 Street at around 3:30 a.m. on Friday.

The car was parked smack in front of the hydrant, and out of expediency or frustration — or maybe a bit of both — the firefighters smashed the front side-door windows on the driver and passenger side.

Don’t mess with guys who go to work each day carrying axes.

But mostly, look upon de Blasio’s works and despair:

No mention of this on the fake news media, all of Manhattan boarded up, people going through red lights, streets empty. pic.twitter.com/eLKNzadbeX

That’s not the New York City we knew and loved.

Back by PPB, officers cleared the street a few minutes ago. A bunch of people then exited the building, so I'm guessing they were trying to make a path for off-duty employees to leave and get to their cars. pic.twitter.com/qDLc41Qxd9

Here’s another #ProTip: When you need a police escort to get from your workplace to your car, it isn’t because someone else is exercising their right to peaceably assemble or to protest the government for a redress of grievances.

It’s because the mob has taken over the streets and the police have signally failed to restore order.

Bee-tee-dub, gentle reader, the Feds withdrew because that’s what the mob demanded.

Now the Oregon State Police have withdrawn because the local DA won’t prosecute members of the mob.

How much longer before the police withdraw, or at least effectively withdraw, because they’re outnumbered?

What do we call this?

Insanity Wrap says: Don’t give in to the mob.

How hard is it to understand that most States don't have up-to-date voter rolls?

So, when you mass mail postage paid Mail-In ballots many, as 200,000 in Nevada, go to wrong addresses, dead & moved folks, etc.

The vital thing about in-person voting is that the process increases trust at every step of the way, particularly when photo ID is required.

Here’s how it used to work at Insanity Wrap’s little precinct before Colorado outlawed in-person voting (because Democrats).

Poll workers come from both major parties, helping ensure that they’re keeping an eye on each other.

You show up and present your ID to one of the poll workers, who compares it to their voter roll and against your actual face. (This increases trust in both directions.)

Only then do you receive a ballot, which you take to a booth to fill out in private.

If you need help, help is provided to you — in public, where everyone can see.

You then personally slip your ballot into an electronic counting machine, give a wave to the nice poll workers, and leave.

This process engenders trust, that each person received just one ballot, and that ballot was properly marked and counted. Poll workers increase trust further, not just by keeping an eye on one another, but by making sure each person receiving a ballot was legally entitled to receive one.

Insanity Wrap understands that no human system is perfect, and every system is subject to mistakes and abuse. Nevertheless, the steps described here engender the minimum amount of trust required for rational people to have faith in both the process and the result.

An election without trust is barely worth holding — if that.

Insanity Wrap finds none of these virtues in mail-in balloting.

Mail-in ballots get sent out according to a process invisible to the voters.

Yes, you received a ballot with your name and address on it, but did someone else at your old house or apartment receive one with your name on it, too? If so, what happened to it?

Who “helps” older or infirm people fill out their ballots in private?

Were extra ballots printed? If so, what happened to them?

What happens to your ballot after you drop it, as yet uncounted, into a USPS box?

Where does the counting take place, and by whom?

The postal workers union just endorsed Joe Biden — can it be trusted?

If you don’t know — if you can’t know — the answers to any of these questions, then how much do you trust the process?

Insanity Wrap believes the move to mail-in voting isn’t so much about stealing elections. Democrats have always proven willing (and oftentimes able) to come up with enough mystery ballots to win a close contest.

Instead, mail-in voting is about reducing the level of trust the public has for the result of any and every election.

When trust in free elections is reduced low enough, the people will be ready for something…

What that “else” is, Insanity Wrap would rather not know.

‘The President Was Not Encouraging’: What Obama Really Thought About Biden

Barack Obama is such an odious — and underhanded — putz that we’d really enjoy missing him if he’d just go away.

But this time his presence makes us giggle like a schoolgirl.

A really manly schoolgirl with a surprisingly deep giggle.

Anyway, POLITICO buried the best part of its story way down near the bottom:

Some Biden allies noted that Obama’s endorsement of Biden, when it finally arrived, lacked the effusiveness of his endorsement of Clinton. “I don’t think there’s ever been someone so qualified to hold this office,” he said of Clinton in his video message in 2016. Four years later, in his endorsement video for Biden, he said: “I believe Joe has all of the qualities we need in a president right now … and I know he will surround himself with good people.”

“I know he will surround himself with good people” is hardly a ringing endorsement.

It’s a tacit acknowledgment that Punxsutawney Joe is not up to the task at hand — and it’s also a very public insult.

But that’s Obama. He’s needlessly mean to members of his own party.

A few years ago Obama was thanking Debbie Wasserman-Schultz at some big event — we dearly wish we could find the video of this — and complimented her on her pretty smile.

That’s like complimenting Insanity Wrap on our sobriety deep into a Margarita Friday Night.

We have said many mean things about DWS over the years, all of them about her being wrong on virtually everything. Insanity Wrap would never even consider making fun of her looks.

But Obama did just that in a backhanded way, right in front of her, a large crowd, and TV cameras — all the while expecting her to sit there and smile her way through the humiliation.

Barack Obama is cruel, perhaps most cruel to his own allies.

What an awful little man. 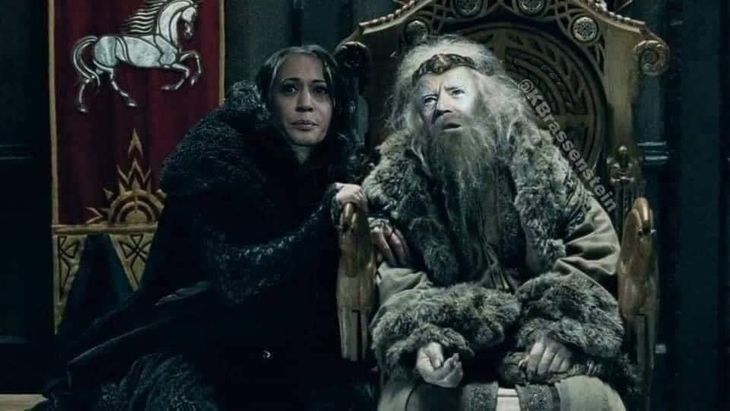 Explains everything, doesn’t it?

Steve launched VodkaPundit on a well-planned whim in 2002, and has been with PJ Media since its launch in 2005. He served as one of the hosts of PJTV, a pioneer in internet broadcasting. He also cohosts "Right Angle" with Bill Whittle and Scott Ott at BillWhittle.com. He lives with his wife and sons in the wooded hills of Monument, Colorado, where he enjoys the occasional adult beverage.
Read more by Stephen Green
Tags: BARACK OBAMA INSANITY WRAP