Everyone knows you never go full T.J. Hooker… everyone but Florida Man, that is.

It was a big demotion for William Shatner to go from commanding the starship Enterprise to driving a police cruiser around Los Angeles in the mid-’80s cop show, T.J. Hooker. But during the show’s five-season run, there was one thing you could always count on: Sgt. Hooker hooked to the hood of a bad guy’s car moving at high speed and refusing to let go until he’d made his arrest.

We got a bit more context on this freaky story, and according to the driver himself … the man put himself on the hood on his own volition, and started causing a ruckus for no reason.

The driver, Edward Hughes, tells TMZ … this dude hopped onto the interstate bloodied and frantic, waving for the truck to stop … which Hughes says he did. Once he did that, Hughes claims the guy latched onto his hood and started using a metal object on his windshield.

Hughes says he panicked and hit the gas, trying to shake the man off … as he was successfully breaking through the glass.

I’m going to go way out on the pointy tip of a very slender limb and guess there might have been drugs involved.

Florida Woman Does Fine by Fido

I’m thinking dogs don’t suffer from placebo effects, since it isn’t like Florida Woman said, “Hey, try this and your arthritis will feel better.”

Besides, there does seem to be something to all the CBD hype.

As someone who has suffered from insomnia since before I could walk, I’ve tried just about everything. Over the last two months, I’ve tried a couple of nighttime CBD regimens, and results have generally been good. Not perfect, when when you used to be able to count how many good nights of sleep you got in a month on the fingers of one hand, any improvement is welcome.

But the point is this: Way to take care of your pup, Florida Woman!

Persistence, thy name is Florida Man:

A Florida man walked into a bar — and claimed he was a “health inspector” who would shut the place down if they didn’t serve him a drink.

When the manager denied his request for a drink, Walters insisted he was a health inspector and threatened to close down the business, Sebastiandaily.com reported.

When that story didn’t work, Walters allegedly claimed his father was the Chief of Police in Palm Bay.

What Fresh Hell Is This?

Florida Woman in Bikini Top and Thong Detained Due to Old Law Still On Books!https://t.co/Fbdtq8Rw8c pic.twitter.com/E7nQO1qvTi

Video at the link.

Of Course the Check Is Good — I Just Printed It Myself

What’s the over/under on how many years it takes everyone at the dealership to stop razzing whoever it was that accepted the check?

Cocktails and Crime on the Beach at 5

Florida Man Arrested With Gun In One Hand, Beer In The Other https://t.co/bovHjv4ksB pic.twitter.com/IkDmeQsUFa

The Secret Service Was Not Amused

Palm Beach Police spokesman Michael Ogrodnick said the 15-year-old boys were arrested shortly after they entered the grounds of the resort Friday and dumped the backpack, which contained a mini AK-47 with a loaded 14-round magazine.

He said the three are lucky that neither the president nor any family members were there, because Secret Service agents might have shot them. The club is closed for the summer.

“They had no idea where they were,” Ogrodnick said.

They got quite the education, you can be sure.

Central Florida woman loses business, learns and helps others launch their own https://t.co/LJS9tA0ffZ

Yeah, there are a lot of awful stories this week about idiots and their racist outbursts, or people suffering from Third-Degree Mask Fever…

…but these stories are out there, too, and it’s good not to have to hunt too hard for them.

Another Saturday Night and I Ain’t Got Nobody

Florida man caught with his pants down & touching himself

What’s the problem here? Florida Man had his mask on.

Florida man & woman arrested after chase that began in Mississippi and ended in Alabama.

Not exactly Bonnie & Clyde, but give them bonus points for a multistate pursuit. 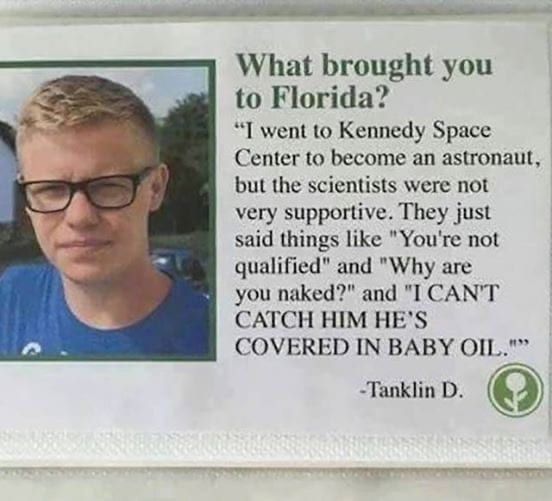 I blame the lack of quality STEM education in our high schools.

And You Thought You Were Having a Bad Day?

Florida man is bitten by alligator, then by a shark.

Never mind, it turns out these were separate incidents:

A 38-year-old Florida man is probably one bite shy of a punch card for receiving a free burger somewhere as he was recently bit by an 8-foot-shark, after having previously been bit in his life by an alligator and a spider.

Florida Man, have you considered a quiet life in the Midwest?

Because after these last five months, why the hell not?

This guy: “Have you ever been so bored that you…”

Literally everybody in the world except this guy: “…NO I HAVE NOT!”