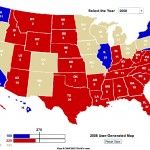 Long version: So does McCain.

We’ve got lots of changes to go over from the last map. Six weeks ago, it looked to me like the Democrats had a lock on 227 EC votes, and the Republicans 229. The remaining 82 up for grabs were, at that point, totally unpredictable. But with the candidates nearly known (Obama vs McCain) the number of unknowns has actually gone up.

OK, here’s the thing. Current polls — and the primary votes already held — show Obama does best in states he has virtually no shot at winning in November. (Maybe the red states are so red because the local blue voters are even further to the left than blue state voters. Just a thought; I’ve got nothing to back that up.) And Bittergate turns a few deer-infested True Blue states into tossups. The most important of those are New Jersey Ohio, Michigan, and of course Pennsylvania. Obama loses Oregon as a sure thing, too. I don’t know if that’s because of all those bitter ignoramuses out in the woods or if the white supremacist groups in the eastern part of the state are expected to show up at the polls in great numbers. Virginia is trending blue, and might just be a blue state by 2012. But this year Virginia is in the heart of Deer Country, and stays red. Missouri should probably go on this list, but I’m leaving it to its role as the bellwether state.

If Hillary were the nominee, I’d color New Jersey, Ohio, Michigan, and Oregon blue again. Maybe Pennsylvania, too. Clinton would probably take Arkansas, despite the fact that voters there know her so well. (Maybe absence really does make the heart grow fonder.) And I’d have to give serious thought to taking the red off of Florida.

Does McCain bring anything with him? Not that I can see. Colorado voters like maverick independents and maverick Democrats, but not so much the maverick Republicans. Colorado stays unshaded. New Mexico, too — I don’t know if McCain’s immigration slipperiness will help him or hurt him with that state’s Hispanic voters.

The way the map looks to me now, McCain has a lock on the same 229 EC votes, but Obama is down to 168. With the war and the bad economy, however, I’d expect the swing states to trend Democratic.

Typically, voter passion drives the race. But McCain vs Obama is a weird matchup. For Obama, the passion will have to come from the left, the young, and other fools. McCain, undear as he is to conservatives, will have to generate passion — and lots of it — from the center if he wants to win any more states than he already has.

Once again, thanks to the good folks at 270towin.com, for their handy little mapping applet.

Also, forgive the crappy-looking, out-of-whack thumbnail map. WordPress still can’t generate proper thumbnails without forcing me to jump through hoops of fire, or having to install stupidly necessary add-ons which aren’t even compatible with the latest and suckiest version of WordPress. Hell, WordPress is so bad, it can’t even generate proper a proper alignment command. I’m better at simple goddamn HTML than WordPress is, which is like saying the town dunce has a better grasp of differential equations than the math department at MIT. Only in this case, it’s true.

Even the new UI in version 2.5 is giant step backwards. It’s like going from Windows 2 to Windows 1 — in a parallel universe where Bill Gates didn’t have a Steve Jobs to copy from poorly.

If you have the idea that I hate WordPress and wish that live earthworms would permanently infest the undergarments of its creators, then you’re getting maybe a tenth of how bad I think it is.