Kyle Rittenhouse Goes on Trial This Week. Here's Why the Media Are Trying So Hard to Dirty Him Up

On August 25, 2020, Kyle Rittenhouse answered the call from a former Kenosha city councilman for armed men to protect businesses that had been targeted by Antifa and BLM rioters the two previous nights. Monday, Rittenhouse goes on trial in Kenosha for killing two attackers and wounding a third that night. Rittenhouse claims self-defense. In fact, Rittenhouse has an excellent case for self-defense, but many in the media don’t want you to know that. They, along with prosecutors, have tried hard for the past year to dirty him up.

Let’s briefly take a look at the case.

Violent rioting had been underway three nights before after police shot Jacob Blake multiple times as he tried to elude police after his partner reported him for breaking a domestic violence restraining order. He was already wanted on a warrant. Blake was accused of sexual assault. As he tried to escape the officers ordering him to freeze, Blake ran to his car, where he kept a knife, and was shot seven times. His kids were in the back seat. He later admitted that running away was a mistake.

On day three of the riots, video of the baby-faced 17-year-old Rittenhouse shows him explaining why he came to an independent reporter shooting video that night.

Rittenhouse, a lifeguard who hoped one day to become a cop or a nurse, wore purple surgical gloves and held his medkit during the interview. The strap of his Smith and Wesson M&P rifle was slung across his body. He told the reporter that he was there to help “people getting injured.” He went on to say, “Our job’s to protect this business … and if there’s somebody hurt, I’m running into harm’s way.”

At 11:45 p.m. in the parking lot of a company called Car Source, where “cars are being vandalized,” Rittenhouse walks toward the parking lot with his gun. He walks past Joseph Rosenbaum, who had been previously threatening people and encouraging others with guns to “shoot me, [n-word], shoot me [n-word],” and telling people he didn’t care if he went to jail because he’d just gotten out. Rosenbaum starts chasing Rittenhouse into the Car Source parking lot. He throws a weighted bag at the teen from behind and “lunges toward Rittenhouse.” Prosecutors say they don’t know what the bag contained. At about the same time, another mob member discharges a pistol into the air behind the two. Seconds after the shot, Rittenhouse looks back at his pursuer and shoots him. He discharges his gun four times. Rittenhouse gets on his phone to call for help. 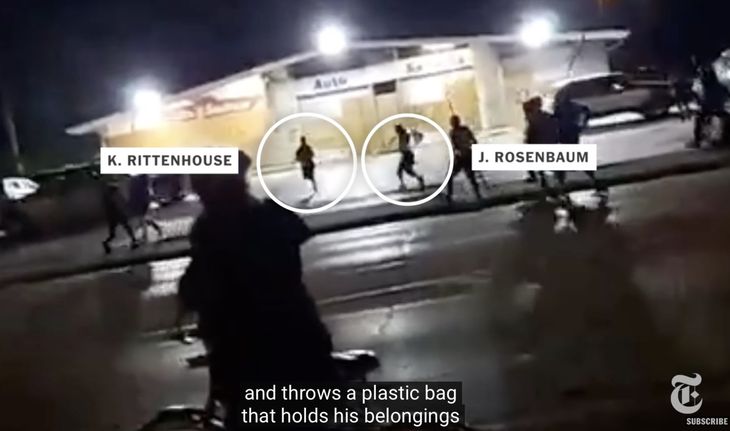 He sticks around while Rosenbaum receives medical attention and then begins running on Sheridan Avenue where a group of people has begun chasing him.

As Rittenhouse glances back at the pounding feet coming up behind him, one of the men chasing him takes a swing from behind, knocking off his hat. Rittenhouse keeps running away and another man launches a haymaker at his head from behind. 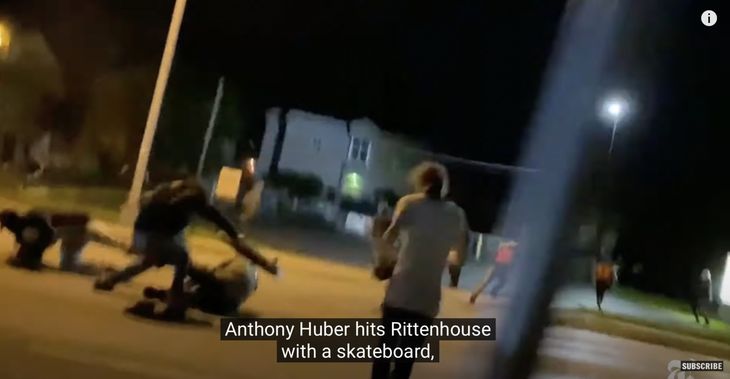 Still another man, Gaige Grosskreutz, is on the scene with a pistol in his hand pointing it toward Rittenhouse. Rittenhouse shoots him in the arm, seriously wounding him. 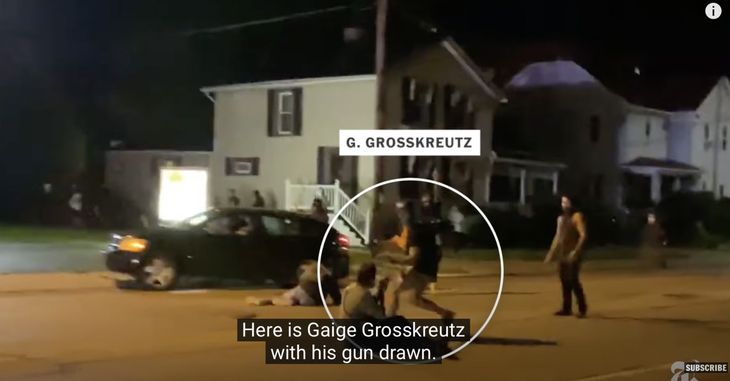 Grosskreutz later laments in his hospital room that he wishes he would have killed Rittenhouse. Grosskreutz is now suing the city in federal court for not protecting him the night of the riots.

Though the media have tried to couch the Rittenhouse shootings within some sort of racist framework, all of the actors that night were white.

But that hasn’t stopped attempts to dirty up Rittenhouse before his trial.

Indeed, charging Rittenhouse at all in the case is gobsmacking to some use-of-force experts who argue that since all instances were on video and showed Rittenhouse attempting to flee the attacker and shooting only when being attacked and in fear for his life, it was obvious all three shootings were in self-defense.

But this is post-Antifa and BLM riot justice.

Prosecutor Thomas Binger describes Rittenhouse as a “chaos tourist” who hung around with white supremacists and Proud Boys before the shooting. But that didn’t hold up under scrutiny by the judge. In an evidence hearing, Binger cited media reports as “evidence” to support his speculations about Rittenhouse. The judge scoffed. Indeed, some Wisconsin Proud Boys saw the teen and his mom in a restaurant after he was charged and became publicly known. They gave him a warm greeting and asked him to pose with them for a photo, flashing an “OK” sign. Binger and the media used the photo to make assumptions, but during the investigation it was discovered the Proud Boys had never heard of Rittenhouse until long after the shootings.

The judge didn’t let it into the trial because it wasn’t germane to the charges against Rittenhouse.

Binger argued in court that it was somehow illegal for an armed person to shoot an unarmed person, hoping to set an expectation in the minds of the public that it was unreasonable for Rittenhouse to shoot the men attacking him. Use-of-force attorney Andrew Branca says Binger went “off the rails” with this absurd line of argument.

But some damage was arguably done in the court of public opinion.

Robert Barnes, who at one time was a Rittenhouse attorney, and who’s offered to help lead defense attorneys Mark Richards and Corey Chirafisi with jury selection, says Binger, has “lie[d] about Kyle for year” and “defined him in the court of public opinion that when that jury sits down, it doesn’t matter whether they see the evidence because they will see the evidence through their preconceived prejudices.”

He says those “lies” have been borne out in the polling he’s done showing “2/3 of the people of Kenosha” believe Rittenhouse is guilty of the charges against him. Indeed, we’re seeing some of the same PR tactics in Kenosha as we saw in Minneapolis in the trial of former police officer Derek Chauvin for the death of George Floyd. It was nearly impossible to get a fair trial as we saw from jury statements after the guilty verdict.

Barnes says the prosecutor knows that his audience – the media – will dutifully transcribe his wild accusations, which he knows the judge won’t allow in the trial. Barnes says it’s a classic case of projection. “Take everything that the rioters and the looters and the arsonists and the sociopaths that were there that night, several of whom stalked [Rittenhouse], tried to kill him, physically attacked him – take their traits and Binger has stuck them onto Kyle.”

Related: Portland Activists Survey Themselves and Conclude Un-Woke Cops Are to Blame for Their Riots

He pointed to the motions Binger filed in court to make his case. Using scare-quote fingers, Barnes says the motions weren’t about “evidence, or bail, or jury instructions.” They weren’t real claims. He was just poisoning the court of public opinion.

In fact, the prosecution has taken quite a drubbing in pretrial motions.

Much has been made of the decision by the judge to allow the use of the words “looters,” “rioters,” and “arsonists,” to describe Rittenhouse’s attackers, but only if they have evidence to prove it. He issued a blanket order not to describe the three attackers as victims ruling it prejudicial and wrongly portraying the dynamics that night.

Who knows what will happen in court. Jury selection starts Monday and will likely take several days. Judge Bruce Schroeder says he may vet a group of 150 potential jurors to winnow it down to a final jury with alternates. He says he doesn’t want to sequester the jury. Judge Schroeder seems a bit more evenhanded and apolitical so far in court proceedings.

Victoria Taft is an award-winning journalist, writer and terrestrial radio talk host, heard in Seattle and on the rest of the Left Coast. Listen to her twice weekly  “Adult in the Room Podcast.” Find her at VictoriaTaft.com  Parler, MeWe, Minds, Locals, Twitter & Facebook. Her book mocking antifa will be out this year. For media inquiries write: [email protected]
Read more by Victoria Taft
Tags: ANTIFA GUN RIGHTS BLM KENOSHA