Nearly 4 million Texans lost power during a historic ice storm last week, a storm that ravaged a broad swath of the country. As PJ Media’s Bryan Preston noted, two highly-touted forms of green energy, wind and solar, took big hits during the blackout. Natural gas energy production increased to compensate for it. Another energy source proved rather reliable during the blackout, however. This energy source does not involve fossil fuel emissions, but climate activists often ignore it.

This more reliable energy source is none other than nuclear power. While nuclear power did take a hit during the Texas blackout, three-quarters of Texas’ nuclear power plants remained online. Even the dip in nuclear energy production should allay Americans’ fears about the safety of nuclear power.

As The Washington Examiner reported, one of the two reactors at the South Texas Nuclear Power Station shut down during the storm, knocking out about half of the station’s 2,700 megawatts of generating capacity. The second reactor at the plant continued operating as normal, providing more than 1,300 megawatts of electricity.

The Comanche Peak nuclear plant, Texas’ other two-unit nuclear facility, continued running as normal during the blackouts. That means only one of Texas’ four nuclear reactors went offline during the storm.

Nuclear power plants usually weather storms rather well, providing carbon-free power around the clock. Yet as Texas Railroad Commissioner Wayne Christian pointed out, the Electric Reliability Council of Texas (ERCOT) did not build up Texas’ power plants to face cold weather, despite a federal report warning about this weakness over a decade ago.

“It’s very rare for weather issues to shut down a nuclear plant,” Brett Rampal, director of nuclear innovation at the Clean Air Task Force, told The Examiner. “Some equipment in some nuclear plants in Texas has not been hardened for extreme cold weather because there was never a need for this.”

The Nuclear Regulatory Commission reported that the reactor shut down due to a disruption in a feedwater pump to the reactor. The shutdown did not pose any danger to the reactor itself. Rather, the storm tripped one of the reactor’s normal safety operations protocols.

“It was the connection between the power plant and outside systems,” Alex Gilbert, project manager at the Nuclear Innovation Alliance, told the Examiner.

According to data from the U.S. Energy Information Administration, nuclear energy remained extraordinarily constant compared to wind and solar energy. 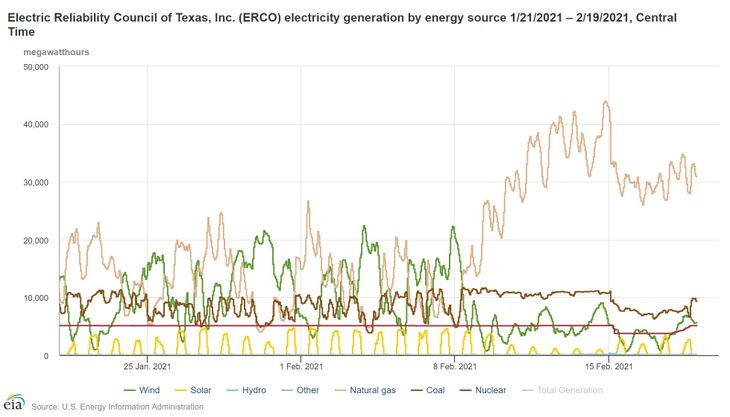 “The takeaway from this storm should not be the failure of fossil fuels, but the failure of leadership at ERCOT and the dangers of relying on intermittent, unreliable forms of energy like wind for a quarter of our energy needs,” Wayne Christian, the Texas Railroad commissioner, argued. “It shows as clear as day that the goal of 100% renewables by 2035 is unrealistic and attempts to get there will only increase suffering and harm Texas families during adverse weather conditions.”

The bottom line? “Had Texas been using 100% renewables, we would have had 100% blackouts.”

No, AOC, the Green New Deal Is NOT the Solution to Texas Blackouts