Guess What Happens if You Search for 'Racist' People on Twitter...

That’s right. If you search for “racist” on Twitter, and select the “people” option, the very first result is the account of President Donald Trump (@realDonaldTrump). 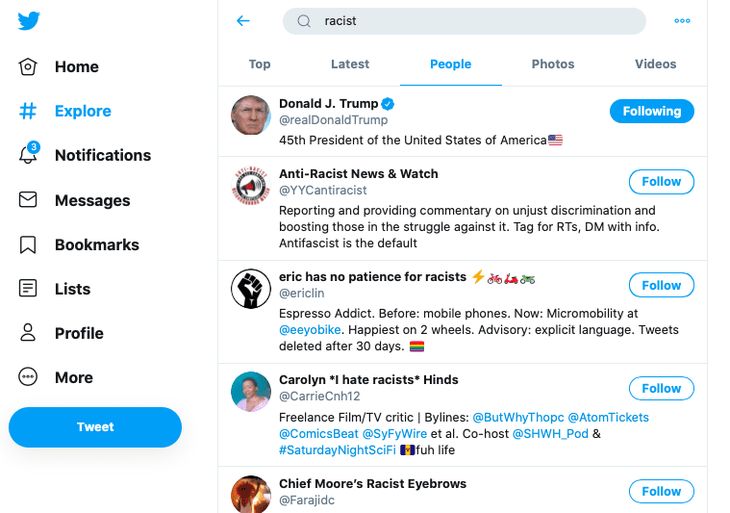 Trump also comes up as the top result for a “people” search for the term “racist” on mobile.

When reached for comment, Twitter insisted the search result is merely a function of the social media platform’s algorithm.

“If an account is mentioned often alongside certain terms, it can become algorithmically surfaced together as a recommendation,” a spokesperson told PJ Media.

It seems likely Twitter’s staff are not displeased with the results, however. After the social media platform added an extremely biased “fact check” to Trump’s tweet warning about vote-by-mail schemes, the president signed an executive order calling for Big Tech companies to lose their liability protection under Section 230 of the Communications Decency Act if they engage in viewpoint discrimination. Twitter then claimed another of Trump’s tweets violated its policies by “glorifying violence.” On Thursday, the company removed the Trump campaign’s George Floyd tribute video, citing copyright violations.

It is possible these biased search results are merely the result of Twitter’s algorithm. After all, the president’s critics lambaste him as racist all day long, often either “replying” to his tweets — so their attacks connect with his handle (@realDonaldTrump) or otherwise “mentioning” the president in an attempt to get under his skin.

Trump is not a racist, however.

Trump is not a racist

In February 2017, about a month after Trump took office, the presidents of 100-plus Historically Black Colleges and Universities (HBCUs) met with the president in the Oval Office. Trump welcomed rapper Kanye West to the White House. He has elevated black and brown Americans to high positions in government: naming Ben Carson to HUD; naming Ajit Pai chairman of the FCC; hiring Omarosa Manigault Newman in the White House (who said Trump wasn’t racist before she accused him of being racist); and many more.

Under Trump, the black unemployment rate reached its lowest point in 17 years. Trump celebrated the low unemployment rate in his second State of the Union address, but Democrats did not rise to clap for this great achievement. Voters have said Trump is better for young black Americans than former President Barack Obama.

While the economy has taken a dive in the wake of the coronavirus lockdowns, the president will continue to champion entrepreneurship and economic opportunity for all, especially the black community.

The president has received praise from many black Americans. Some leaders of HBCUs praised Trump as being “more responsive to our community” than Obama’s administration was. Robert Johnson, the first black billionaire, gave the president an “A+” on the economy.

Indeed, it is not inconceivable that Trump could actually win the black vote in 2020 — although it is still unlikely.

Is it still possible that the president, in his heart of hearts, harbors some dislike or animus toward black people? Sure. But it would take a mindreader to draw that out. There are some claims that Trump mistreated black people in his real estate dealings in New York. That’s quite possible. His statements on the Central Park Five are also concerning.

Yet it seems unlikely the president is actually a racist. His angry tweets and hyperbolic declarations have been quite ugly at times, but there is no clear racist streak to them. Trump’s governance and celebration of low black unemployment certainly do not support any claims of racism.

While Democrats have consistently attacked him for saying there were “decent people” on both sides in Charlottesville, Va., he also condemned white nationalists and white supremacists in the very same statement.

If Twitter is in the business of fact-checking, it should either tweak the algorithm or include a “fact-check” on Trump’s Twitter handle when it comes up in “people” search results for the term “racist.” It would only be fair…