It’s a well-established fact that deaths of despair rise with economic hardship. This research was incorporated into a map from Well Being Trust that forecasts the number of deaths per 100,000 related to despair in each state. Because these deaths include those related to alcohol and drug abuse, the map covers 2020 to 2029. 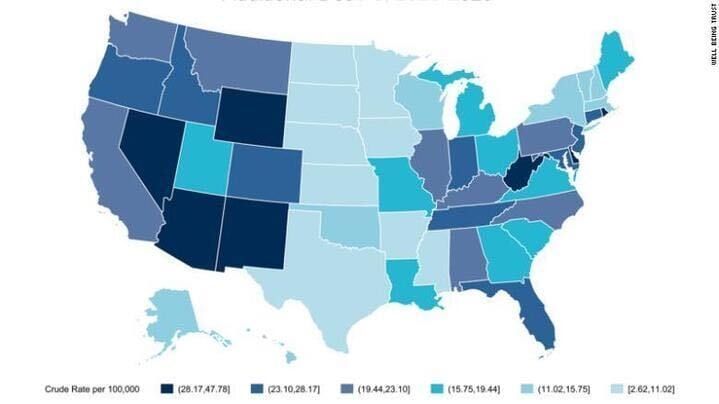 The group forecasts 75,000 deaths directly related to the pandemic. The economic and mental health effects have already been significant, with Just the Facts predicting 7 times the life-years will be lost to the shutdown than the severe social distancing will save.

It’s already starting and doctors in Northern California are calling for shutdown to end according to ABC7 in San Francisco:

Doctors at John Muir Medical Center in Walnut Creek say they have seen more deaths by suicide during this quarantine period than deaths from the COVID-19 virus. The head of the trauma in the department believes mental health is suffering so much, it is time to end the shelter-in-place order.

“Personally I think it’s time,” said Dr. Mike deBoisblanc. “I think, originally, this (the shelter-in-place order) was put in place to flatten the curve and to make sure hospitals have the resources to take care of COVID patients. We have the current resources to do that and our other community health is suffering.”

Dr. deBoisblanc went on to add that he has seen what would normally amount to a year’s worth of suicide attempts in just four weeks. In a special produced by the news channel, one mental health crisis line director said daily calls to her service have increased by 67%. A 33-year veteran of the John Muir Medical Center trauma unit, nurse Karen Hansen said:

The patients are coming into the unit with more severe injuries and the trauma team has not been able to save as many as they normally can. Contra Costa County Crisis Center Executive Director Tom Tamura believes lockdowns are causing patients with mental illness to lose connection with their support networks. These networks are often the people that encourage the individual to seek help.

“I think people have found themselves disconnected from the normal supportive networks that they have, churches and schools and book clubs, you name it,” Tamura said. “And that, coupled with the closure of some counseling services, people were maybe in a little bit of shock. They were trying to weather the storm a bit but as that isolation has grown people have come to realize this isn’t a sprint it is marathon.”

He suggests rather than waiting, people should reach out to those they know may be struggling to check in. Despite the concerns of their mental health and trauma professionals, the hospital made an official statement supporting lockdowns.

Statement on deaths of despair

I am old enough to remember the White House Press Corps mocking President Trump’s assertion that we can’t let the cure be worse than the disease. For urban professionals capable of working remotely and maintaining their paycheck, the economic and personal devastation the lockdowns have caused likely seem remote.

That doesn’t excuse the outright mocking and derision aimed at the president when he stated there would be increased suicides and drug overdoses if the economy did not start to come back. Frontline medical professionals are no less affected by deaths of despair than they are by COVID-19 deaths.

In addition, losing a loved one to physical illness affects survivors very differently than having them take their own life. Families often struggle with the latter and end up with their own issues of guilt and depression as a result.

It is extremely misleading to say that people who want to lift lockdown are people who are greedy and focused on money. The fact is there are lives that are going to be lost on both sides of that policy. And both sets of lives count in the calculus.

It is past time for state and local leaders to balance the equation. If their healthcare system is stable and their curve is flat, it is time to start following the science. Dying of something other than COVID-19 needs to stop being dismissed as a casualty of the war against the virus. Especially when the risk of becoming severely ill with COVID-19 can be articulated and presented in tranches, allowing individuals to take appropriate precautions.

The governors who think they are saving anyone at this point are making a significant miscalculation. According to data, an overwhelming majority of COVID-19 hospitalizations are of people who were sheltering at home. Continuing that error will only lead to more deaths of despair.

Doctors Warn Trump: ‘The Shutdown Was a Mass Casualty Event’