Doctors Warn Trump: 'The Shutdown Was a Mass Casualty Event'

Many physicians who noted the health dangers that lockdowns can create have been ignored by the media. When Dr. Dan Erickson and Dr. Artin Massihi of Accelerated Urgent Care in southern California held a press conference opposing lockdowns at the end of April, YouTube removed their video.

Stanford physician Dr. Jay Bhattacharya, who had conducted COVID-19 antibody testing across the nation, was explicit in his opinion in an interview with the Hoover Institution:

It is extremely misleading to say that people who want to lift lockdown are people who are greedy and focused on money. The fact is there are lives that are going to be lost on both sides of that policy. And both sets of lives count in the calculus.

Texas oncologists have warned about patients missing chemo and other lifesaving treatments. Estimates also say that the COVID-19 lockdowns present the significant health danger of 80,000 missed cancer diagnoses. Pediatricians and even the CDC are warning of missed well-child exams and vaccinations. Projections warn of 75,000 deaths of despair. There has also been a marked increase in domestic violence, the scars of which can past a lifetime.

All of this data supports the point that President Trump was vilified for making, “The cure can’t be worse than the disease.” Reporters assumed he was talking about purely economic impacts as he directed the Coronavirus Task Force to work on a plan to safely reopen the economy.

Now the president is being petitioned directly. A letter signed by 500 physicians articulated their concerns about the health dangers lockdowns present: 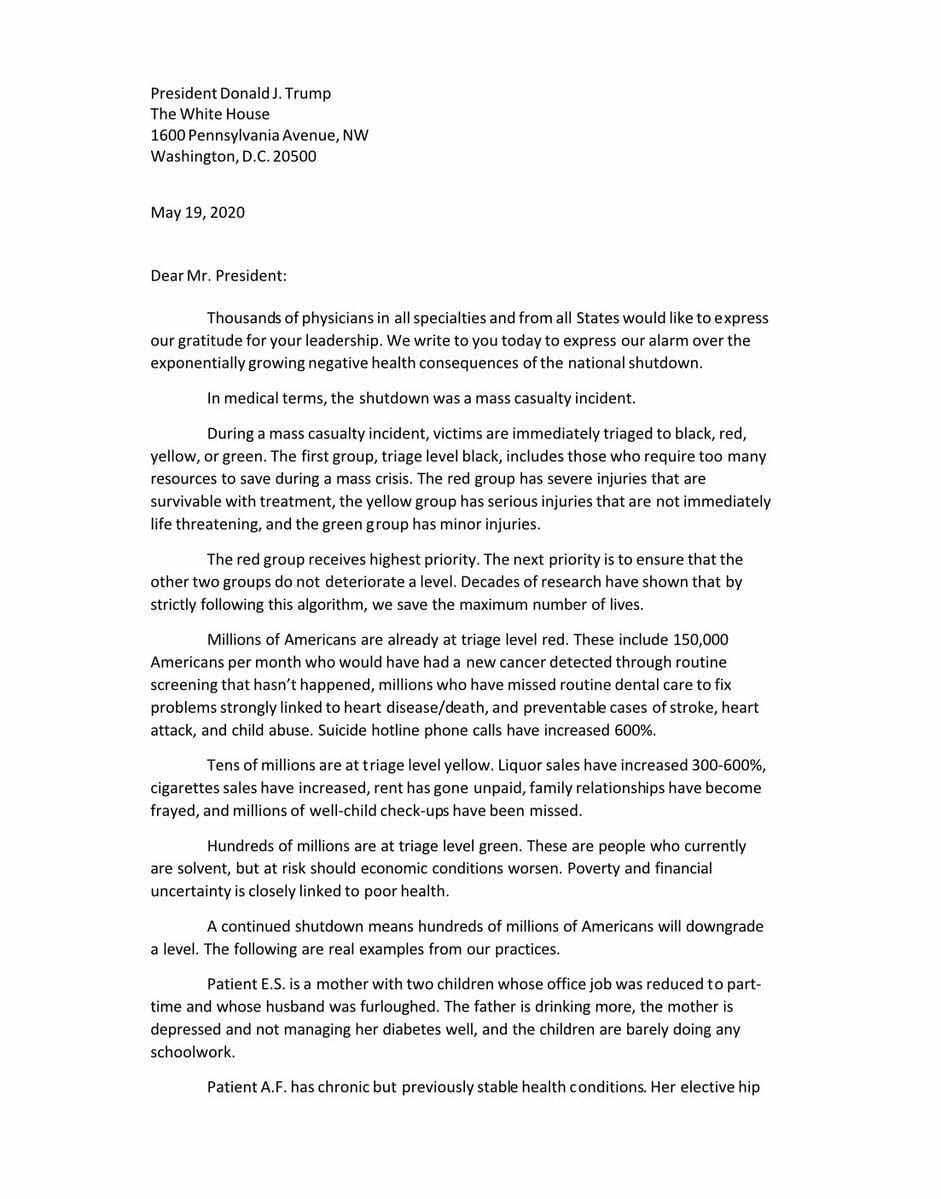 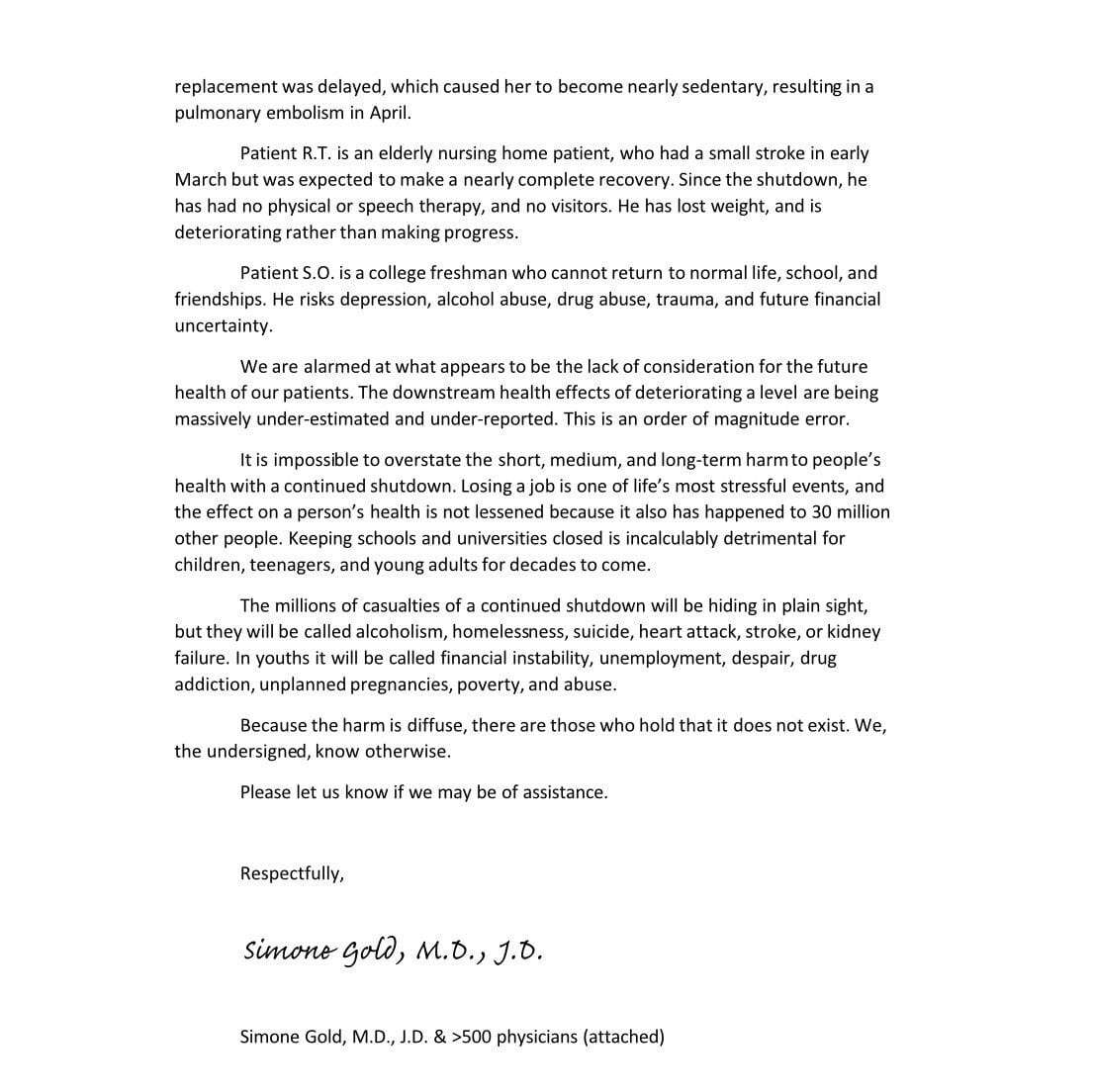 Likening the pandemic to a mass casualty situation is a vision that provides stark relief. By articulating the well-documented and standard practice of triage, Dr. Simone Gold presents the frame in which public policy should be viewed. She reiterates the concerns that healthcare providers have already been warning about to place categories of people into the color-coded levels used in a mass triage event.

If a doctor or first responder arrives at the scene of a head-on passenger train collision, their job is to prioritize care to those who have the highest chance of survival with the highest quality of life. Having done drills on mass triage as a healthcare provider and industrial safety manager, you do walk by people you have a slim chance of saving.

The goal is not to have people degrade a level while you manage the crisis. For the 150,000 cancers that have gone undetected, we don’t want to see an inoperable metastasis or spread develop. We don’t want the 600% increase in calls to suicide hotline to degrade into a 300% increase in attempts. These are just a few of the risks that lockdowns present. The long-term health dangers of missed dental appointments, delayed joint replacements, and missed well-child visits may not be fully calculated for years.

On an emotional level, Governor Andrew Cuomo’s “If we can just save one life” rhetoric works wonders. What needs to be considered just as intently is the cost of saving that life. Are you really just exchanging one life for another? Saving an 85-year-old with two life-threatening preexisting conditions and losing the 40-year-old mother because her breast cancer is no longer operable and has traveled to her lung?

And in reality, we aren’t saving very many vulnerable 85-year-olds. Despite lockdowns, over 50% of deaths nationally have come from the nursing home population and no amount of locking down has changed this fact. In some states, young healthy people were forced to stay home from work and school, while the elderly with COVID-19 were sent back to the nursing home they came from. What exactly were we trying to prevent?

Cuomo was doing simple arithmetic, not the calculus referenced by Dr. Bhattacharya. Unfortunately, our national leaders need to be doing upper-level math and there are no easy choices. However, every actuarial and public policy analysis takes life years into consideration. Anyone who tells you otherwise is just lying.

On the bright side, we have not really happened upon a true mass casualty. We have encountered a new virus. In dealing with it, our leaders can educate individuals on how to best care for themselves and their family as we move back into something that looks like normal life. They do this by using the data to tell us specifically who is at risk for severe disease and the most effective methods to prevent it.

Data from China and New York City tells us staying at home makes no difference at all. Data from the CDC now tells us surface transmission is not likely. So, it’s time the end these useless lockdowns.

And not for a ‘new normal’. Let those who wish to do so go to baseball games, concerts and festivals. We now know an average of 70% of patients that display antibodies report asymptomatic disease. Only a small fraction require hospitalization. The way we remediate the health dangers of lockdowns is to return as quickly as possible to full, productive and meaningful lives that have the potential to look like the ones we lived before COVID-19. Starting everywhere, now.

The Nannies in Naples Ignore Science and Close Beaches