UPDATED: President Trump Headed to Walter Reed Medical Center 'Out of an Abundance of Caution'

President Trump is expected to head to Walter Reed Medical Center in Bethesda, Md., ostensibly for treatment related to the COVID-19 virus. The president announced on Thursday night that he and first lady Melania Trump had tested positive for the coronavirus and were in isolation.

The 74-year-old president is experiencing a low-grade fever, chills, nasal congestion, and a cough, according to an ABC News report.

“President Trump remains in good spirits, has mild symptoms, and has been working throughout the day,” White House press secretary Kayleigh McEnany said in a statement. “Out of an abundance of caution, and at the recommendation of his physician and medical experts, the President will be working from the presidential offices at Walter Reed for the next few days. President Trump appreciates the outpouring of support for both he and the First Lady.”

Wearing a mask, President Trump departs the White House for Walter Reed medical center, where he will be hospitalized "for the next few days" after testing positive for coronavirus https://t.co/Pbeg67KCN5 pic.twitter.com/a4DrDImJ2o

NEW: Upon his arrival at Walter Reed National Military Medical Center, President Trump went directly to the Presidential Suite — he was not seen in the emergency room first, @nancycordes reports. @CBSNews

Earlier in the day, the Trump campaign had announced it was canceling all events involving the president.

Trump campaign announces that events w/ the president will either be postponed or moved to virtual events; scheduled events featuring VP Mike Pence, who tested negative for Covid-19, will resume.
Nothing on if the campaign will start enforcing social distancing, which it has not. pic.twitter.com/1Yh4vXo3QS

Vice President Mike Pence stepped in to handle the only event on the president’s schedule today — a call on protecting vulnerable seniors from COVID-19. According to the White House, Trump is still in control and has not transferred power to the vice president.

Kayleigh McEnany released a statement from the president’s physician outlining his diagnosis and treatment.

“Following PRC-confirmation of the President’s diagnosis, as a precautionary measure he received a single 8 gram does of Regeneron’s polyclonal antibody cocktail,” said Sean P. Conley, physician to the president. “He completed the infusion without incident.” In addition, “the President has been taking zinc, vitamin D, famotidine, melatonin and a daily aspirin.”

Conley said the president is fatigued but in good spirits. “He’s being evaluated by a team of experts, and together we’ll be making recommendations to the President and First Lady.”

Melania Trump has a mild cough and headache, he said, but the rest of the first family tested negative for COVID-19 today. 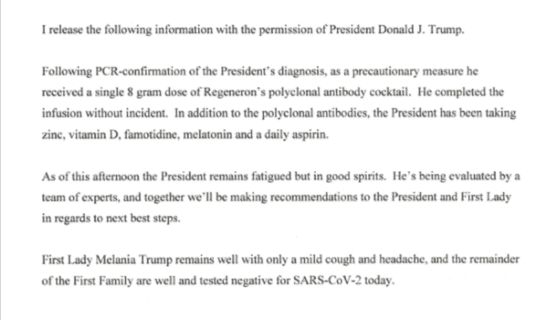 Before departing for Walter Reed, the president recorded a message to the nation. Watch here.

This is a developing story.