This report is part of an investigative series looking into reported family court corruption. For the rest of the investigation visit the catalog here.

PJ Media called into a court hearing on a custody case on Tuesday and caught Judge Dan Wiley berating mom Cori Anzicek, who does not have an attorney, for not consulting with her ex-husband—a convicted child abuser who attacked his minor stepson with pliers— about changing the children’s school. You can read about the horrific attack on Cori’s oldest child, perpetrated by Aaron Anzicek, here. What the judge neither heard nor asked for was the evidence that showed Aaron Anzicek forced Cori to move out of her family home, knowing she could not afford to relocate in the same school district. After she was forced into another school district, she attempted to have the children continue the semester online in their school. The principal and social worker sent Cori an email communicating that staying in the old school was not possible. She had no choice but to enroll the children in the new school, where she reports that they are doing well.

We understand that you have moved to [redacted], and you have requested her to be a remote learner in our district the remainder of the school year.  With her residing in [redacted], she should be attending her new school. As a team, we know [redacted] is more successful when she is an in-person learner.  We also feel having [redacted] finish her [redacted] year in-person with her new school will help with next year’s transition there. 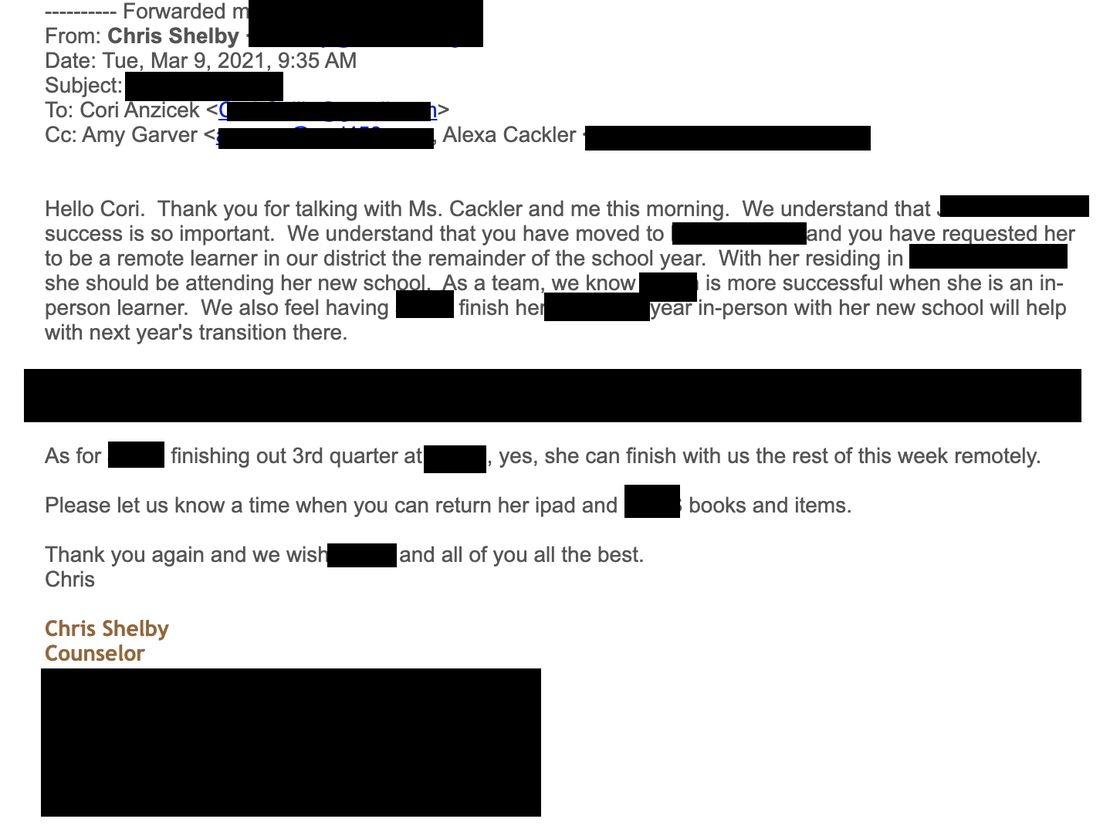 Judge Wiley was informed that this email existed but he did not ask to see it. Nor did he allow Cori to explain what happened without interrupting her and scolding her for not consulting with her alleged abuser about this decision. His only concern appeared to be that Cori had not gotten her ex-husband’s permission to change schools. He wasn’t at all concerned that it looks like Anzicek set her up for a situation in which she would have no choice but to change schools and that would allow him to complain about her in front of the judge.

You can hear the judge berating Cori Anzicek in the audio below. He did not speak to anyone else in the courtroom with the same angry tone. It seems extremely biased against Cori, who is representing herself. Wiley also allowed the father’s attorney, Michael Duma, to complain about Cori using her First Amendment rights to post on social media about what is happening to her in family court. Any decent judge in America would slap down any attempt to silence or squelch a citizen’s right to speak. But Wiley didn’t do that. Instead, he allowed the father’s attorney to make wild accusations and file moronic motions of contempt that allege that Cori’s free speech somehow endangers her children, claiming it is evidence that she has a mental disorder. It’s an outrageous assertion that should never be allowed in American courts.

This guy thinks he can write motions for contempt to silence the free speech of moms in family court and get them labeled mentally ill for criticizing the court process and make them pay him for the pleasure. Power mad much? #KansasCityFamilyCourt @BadLegalTakes pic.twitter.com/huHIZSKsDc

According to Kansas law, sealed hearings become public when the parties assent to it (which Cori Anzicek has) and/or the case has hit the press (which it has). Any concern Judge Wiley might have about the recording below should be moot on those two points, but in case he is still inclined to complain about it, a third defense comes to mind. When I called into this hearing, no one asked me who I was and there were other litigants who were not a party to the case sitting in the hearing listening and waiting for their turn. This makes it a de facto public hearing. There should be no objection to my presence if theirs was not a problem.

Another defense for recording these hearings as often as I can is that there is no other way for the public to hear what is taking place inside these courtrooms and most of it is shady, to put it mildly. The public good outweighs any privacy concerns and the names of minor children have been redacted from the recording. Anyone complaining about this recording as an offense to the privacy of the children is disingenuous. The final obvious defense for making all court hearings public is that they are supposed to be “on the record” and recorded by a court reporter. Nothing is ever said in courtrooms in America that isn’t recorded. But in order to get the court transcripts, the public is charged thousands of dollars. That should stop. Transcripts also do not allow you to hear the tone of voice of the people involved and would not have caught the tone of contempt that Judge Wiley displays for the mom in this case. All court proceedings should be live-streamed and we can make our own recordings. If judges and court actors aren’t doing anything bad, they shouldn’t fear cameras in the courtroom. If they simply behaved themselves, I would have nothing to report.

Why do family court judges behave like this? After berating and interrupting Cori Anzicek for not consulting with her child-abusing ex-husband, who injured her oldest child so severely it left his blood splattered all over the house, Judge Wiley ruled that Mr. Anzicek gets what he wants despite what school professionals say is best for the children; they must return to their old school, which is thirty minutes away from Cori. He offered no answer to her reasonable question about how she would get them there and back every day. Why is Cori Anzicek even required to fight a custody battle in Kansas City family court with a man who should have gone to prison for criminal child abuse? The people of Kansas should be picketing Judge Wiley’s court over this. Where are they?

The issue is that when a judge, particularly in a family court, does something that is against the wishes of a parent and against the best interests of a child, such as what this idiot did in ordering the kids to a school over 30 minutes away and avoiding the mother’s question as to the issue of transportation, there should be a meaningful way to submit a complaint against the judge in a process that has some integrity, i.e., independent inspector general.

PJ Media reached out to Judge Wiley to ask him why he behaved like this but received no response. He did, however, rescind my access to the Anzicek divorce hearing on Thursday, which is open to the public, and called for the matter to be heard in person. Did he do that to keep the press from his courtroom? According to the court website, all courtrooms are closed and everything is to be done online due to the pandemic. Under what authority is Judge Wiley ignoring the rules of his state to keep people safe from the coronavirus by opening a closed courtroom? You may recall that Judge James Sullivan did the exact same thing in Angela Freiner’s case in order to keep the national press out of a criminal bond hearing, which is not at all lawful, as all criminal trials are open to the public. Is this tactic written in a bad judges’ playbook somewhere? Because there is no judicial oversight with any teeth, nothing will be done about it and Cori Anzicek must face a hostile judge in person, in secret, with no lawyer. If there are any First Amendment attorneys out there who would like to sue these judges for violating the First and Fourteenth Amendment rights of the press and the public, I’m a willing plaintiff.