This report is part 10 of an investigative series looking into reported corruption in the Missouri Judiciary and family courts. For the rest of the investigation visit the catalog here.

The United States Constitution guarantees that its citizens have a right to a public trial, but that’s not the case in St. Louis City in Judge James Sullivan’s courtroom. Angela Freiner was arrested on the charge of “interfering with a judicial officer,” for sending a strongly-worded and unhappy email to Judge Nicole Zellweger for sending Freiner’s minor daughter to live with the man she accused of sexual abuse while stripping all contact with her mother. The email read:

The court does not have the right to hold my daughter against her will or traffic her across the country! If she is not returned to me today there will be consequences for your conduct. You have stepped over the line for any time [sic] of immunity as a judge!

For this email, Freiner was thrown in jail in St. Louis County on $75,000 cash-only bond under the prosecution’s allegation that she was “threatening” a judge which is a felony. She was not allowed a 10% bailout either. PJ Media reached out to Prosecutor Wesley Bell’s office through FOIA and requested all the other cases where the prosecution asked for such a high bond amount and was told they had “no responsive records.” PJ Media did reach out to the justice division as suggested by Bell’s office but has not received a reply. One wonders how hard it would be to find such an excessive bail amount in their system if it existed. 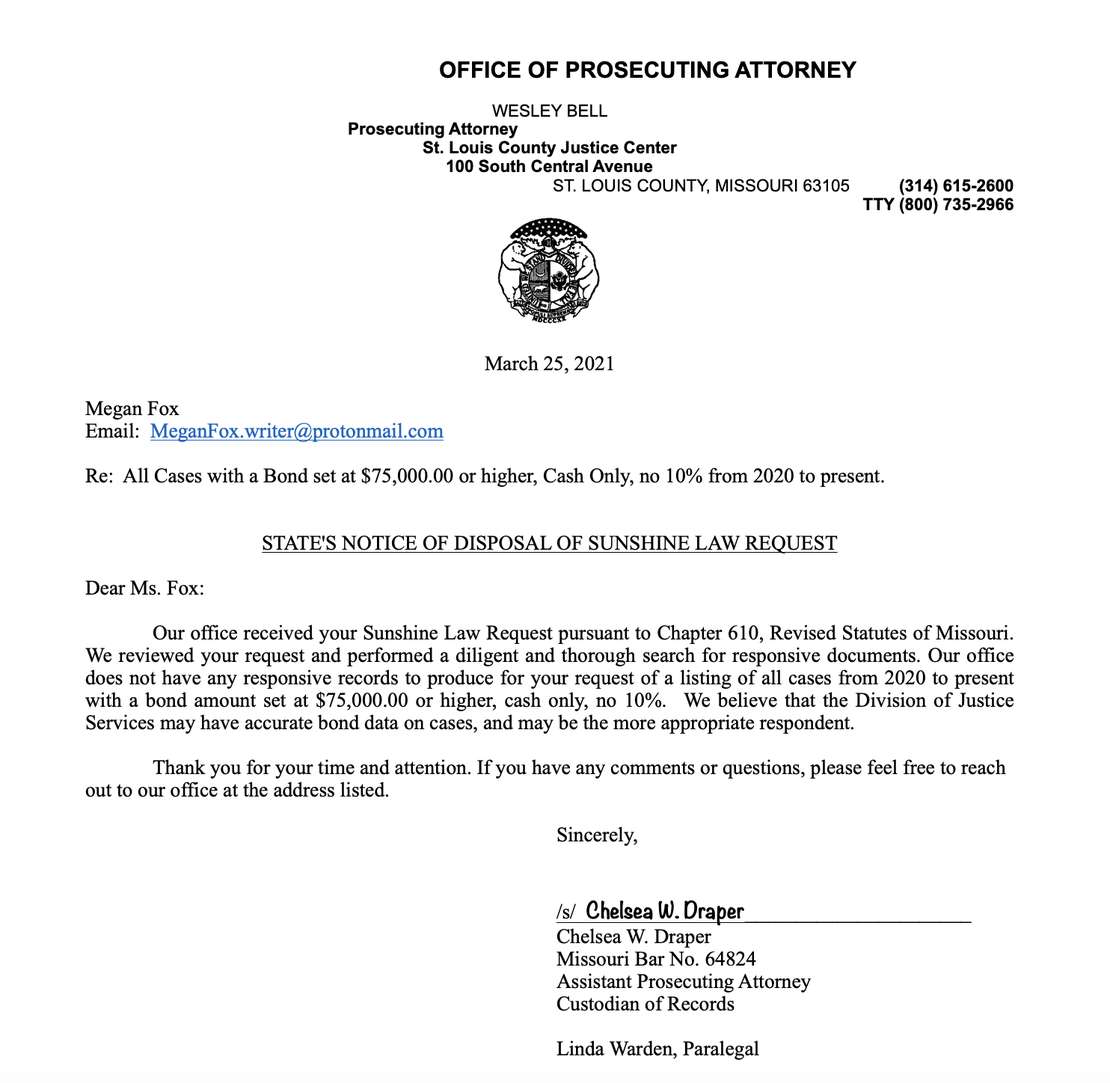 In contrast to the way Freiner’s case is being handled in St. Louis County, according to KSDK, the state of Missouri let violent criminals out of jail willy-nilly with no bond due to coronavirus concerns. Freiner got no similar consideration.

LOUIS — A man who fired a shot at a cab driver during a robbery.

A man accused of assaulting a woman who said her child accused him of sexual abuse.

A man who robbed a restaurant and pointed a gun at an employee.

A man who shot another man.

A man who left the scene of a fatal accident.

These are the types of inmates who Missouri Attorney General Eric Schmitt said have been released from the St. Louis jail in an effort to reduce the population due to coronavirus outbreak concerns.

Freiner’s bond hearing was moved out of St. Louis County where Judge Zellweger sits on the bench because none of the 21st circuit judges would hear it and into Judge James Sullivan’s court in St. Louis City. He presided over the first bond hearing on March 23rd where he released Freiner on her own recognizance but not before kicking out all the court watchers and the members of the press who were there to witness the public hearing. You can watch my live stream about that hearing here.

Within two hours of losing that bond hearing, the prosecutor, Douglas Sidel filed a bond reconsideration motion to jail the grieving mom, who just lost her daughter to an alleged abuser, again with the same excessive bond conditions. Sidel claimed he needed to do this because they had discovered “new” information about Freiner they didn’t know before, namely that she was arrested while in possession of a legal gun and legal prescription marijuana. Sidel wrote,

When officers approached the defendant, they observed her remove a bag she was carrying. Such bag contained a Black Taurus G2G Firearm, with 9 bullets in the magazine. Also contained within the bag carried by the defendant was drug paraphernalia and what the officers believe to be marijuana. Such information was not known to the State of Missouri at the bond hearing held on March 23 2021.

It is not credible that the prosecution did not have this information as it had to have been included on the police intake forms. PJ Media has requested the police reports and is awaiting document production. If the personal property mentioned was illegal, Freiner would have been charged with other crimes, but she wasn’t.

PJ Media reached out to Sidel for comment and received this response from a spokesperson at his office.

We argue our cases in court, not the media. The case number in this matter is 21SL-CR00998​ if you want to follow it on Missouri CaseNet. I expect that all hearings will be public, though you  may need to ask the courts for access information if they are held online, as they have been, due to COVID.

Sidel demanded that the hearing be held immediately under emergency circumstances because they believed Freiner to be “dangerous.” Instead of hearing the motion online as Missouri courts are required to do because they are still in Phase 1 of reopening during the pandemic, Judge Sullivan scheduled an emergency in-person hearing at the closed St. Louis City courthouse on Monday.

At the in-person hearing on Monday, Judge Sullivan told deputies only to allow people on an “approved list” to witness the hearing. Members of the media who showed up to witness Sullivan’s antics were turned away in violation of Freiner’s right to a public trial. Criminal courts in America are never closed unless you’re in Judge Sullivan’s court and somehow the Constitution does not apply and he has the power to open a closed courthouse during a pandemic and hold a secret hearing and legislators in Missouri just let it happen.

Despite Sullivan’s outrageous behavior, he released Freiner again declaring that she is not a danger to Judge Zellweger nor anyone else, as supporters have been saying from the beginning, and upheld the right of Missourians to carry a legal weapon or have prescription marijuana without having their bail set ridiculously high by St. Louis County prosecutor Wesley Bell. It’s nice to see Judge Sullivan doing the right thing and releasing this woman who seems to have been severely abused by the St. Louis legal system. Now if only he would stop holding super-secret, invite-only criminal hearings he might make it off my list of terrible judges ruining the country.

For an in-depth look at what happened in the courtroom on Monday and to hear from witnesses who were present watch my live stream below. Will the prosecutor’s office stop aggressively trying to lock up this concerned mother who still has no idea where Judge Nicole Zellweger sent her child and stripped all contact with the child from her? It’s important to note that no email would have ever been sent to Zellweger if she had not bullied and intimidated a child on tape for the world to hear and then acted like a tyrant and incarcerated both Freiner and her daughter for insisting that child abuse charges be taken seriously. Is there any consequence for a judge who turns a litigant in her court into a felon by her actions? Time will tell.

Welcome to Chiraq: Barstool Sports Reviews Pizza and Witnesses a Carjacking in Chicago