Peloton is easily one of the most popular, if not the most popular, at-home fitness companies in the market right now. Many thousands of users worldwide use their connected bikes and treadmills, which have large screens enabling the users to participate in live classes with a variety of instructors or to stream classes from their on-demand library.

In September, an NBC reporter “misheard” chants of “F**k Joe Biden!” at the NASCAR Xfinity Series race at Talladega as “Let’s go, Brandon!” As a result, the phrase went from a viral social media meme to a chart-topping song on iTunes. It’s on shirts, bumper stickers, and face masks and has made its way into the House chamber. But if you’re a Peloton user, you can’t use “Let’s Go Brandon” as a hashtag.

Recently, with the rise of the “Let’s Go Brandon” as a cultural phenomenon, Peloton members started adding the tag #LetsGoBrandon to their profiles. But, as the tag got more popular, Peloton quickly banned the use of the tag, removing them from users’ profiles. 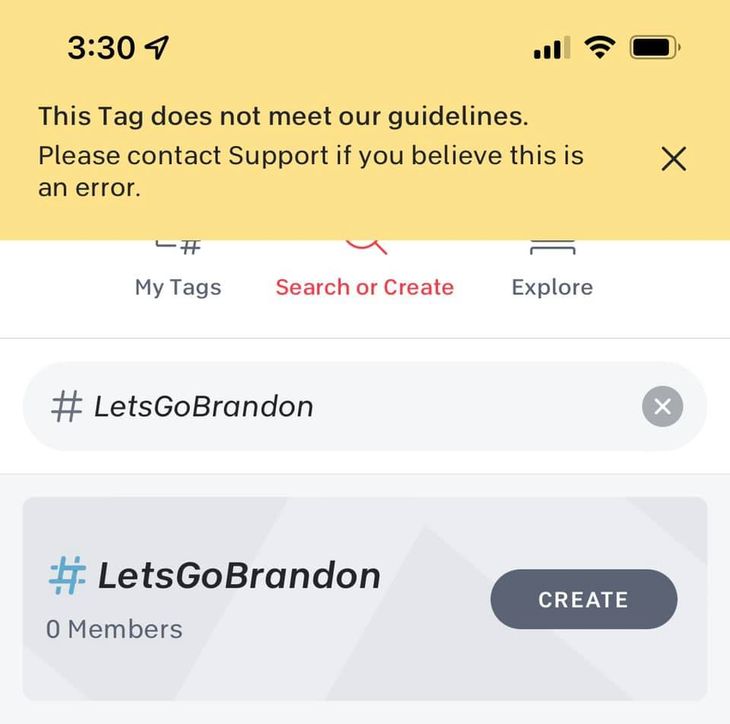 Peloton introduced tags in 2020 to “provide a more robust way for our Members to connect with one another through shared interests or identity.” According to Peloton, this would make “the in and out of class experience feel more personal and relevant.” Users can create their own tags or select existing tags to connect with the Peloton community and even take a class with a group filtered by tag.

Peloton says the feature was “inspired by the sub-communities that came together online as a result of Members connecting over shared interests,” everything from an alma mater to their favorite instructor or sports team. Anything. “With Tags, Members can represent not only their Leaderboard name but also the many facets of their identity.”

Peloton is a progressive company. Earlier this year, it was reported that Peloton employees were allegedly forced to take social justice training inspired by critical race theory. Peloton routinely virtue signals its wokeness, offering LGBTQ pride rides and selling pride-themed apparel. They celebrate Latinx Heritage Month, not Hispanic Heritage Month or Latin Heritage Month, even though the community doesn’t even use Latinx to describe itself. Conservatives interested in at-home fitness have nevertheless chosen to support the company, using the tags feature to find like-minded members.

If you want to support companies that don’t cave to the woke mob, consider becoming a VIP member of PJ Media. As a VIP member, you’ll get exclusive content and help us report on the latest news the mainstream media won’t. Use promo code 2022 this week only for a 40% discount on your new PJ Media VIP subscription. It is the largest discount we have ever offered. So make sure you have the news you need!

Earlier this year, Peloton also banned the #StopTheSteal hashtag. The hashtag #TrumpWon has also been banned—though some variants have gone unnoticed. Peloton does allow political hashtags, and the company doesn’t appear to favor one side over the other overtly. While #LetsGoBrandon has been banned, hashtags such as #ImpeachBiden, #WomenForTrump, and others are allowed. However, while #BlackLivesMatter is allowed (and has over 268,000 members), #AllLivesMatter has been banned. #DefundThePolice is permitted and has over 200 members.

However, it is not clear how #LetsGoBrandon, or any of the aforementioned banned hashtags, violate their community guidelines.

Despite fancying themselves to be a company that celebrates tolerance and diversity, conservative members of their community feel targeted by the company.

“They force every left-wing thing down your throat and we can’t have a ‘Let’s Go Brandon’?” Shannon, a Peloton user told PJMedia.

“For a company who claims to be so inclusive, they sure do alienate a big portion of its members,” says Stephanie, another Peloton user. “Attempting to silence our voices will not silence us. It will only grow our will to speak louder.”

After the #LetsGoBrandon hashtag was banned, users quickly created alternative tags, which were eventually banned as well.

PJ Media reached out to Peloton for comment on this story, but they did not respond in time for publication.

Matt Margolis is the author of Airborne: How The Liberal Media Weaponized The Coronavirus Against Donald Trump, and the bestselling book The Worst President in History: The Legacy of Barack Obama, and The Scandalous Presidency of Barack Obama. You can follow Matt on Twitter, GETTR, Truth Social, Facebook, MeWe, and Rumble.   News tips, praise, hate mail, and media inquiries can be sent to [email protected].
Read more by Matt Margolis
Tags: WOKE LET'S GO BRANDON