Kamala Harris Won't Go to the Border, But We Found a Partisan and Possibly Racist Meeting That She Will Take

Kamala Harris still won’t go visit the U.S.-Mexico border despite the fact that the crisis her boss created there continues unabated — and he gave her the job of doing something about it. She hasn’t shown up for the job, she had an awful trip to Guatemala that accomplished nothing, and she doesn’t like taking questions about any of it either. Harris snapped at a Univision anchor Thursday for daring to ask for specifics after Harris said she will go to the border, declaring “I’m not finished” before avoiding answering the question. That’s after Lester Holt managed to stump her. Harris has to see this question coming by now but is woefully unprepared for it.

This level of awful can’t be pawned off on staff. It’s all her.

Harris insists on her “root causes” argument despite the fact that the Trump administration had the border pretty well under control through a combination of messaging, policies such as “remain in Mexico,” and the wall. Since Joe Biden dismantled those policies and Harris, during the campaign, sided with migrants and against the rule of law at the border, the migrant flow has become a flood. An average of over 170,000 migrants have been caught at the border each month since March. This, of course, cannot take into account those illegal migrants who are not caught, who get away from law enforcement and get into the country after a series of crimes including grand theft auto may have been perpetrated getting them across the border.

Related: AOC Gives Kamala Harris a Piece of Her Mind on the Idea of Securing the Border

Texas is a border state. While Harris refuses to go to the border, she’ll meet with some border-state Democrats next week. Her office announced Thursday that she’ll meet with some partisan Texas Democrats who thwarted democracy by denying a quorum in the legislature, blocking needed election security enhancements. That meeting is set for Wednesday, June 16, in Washington. 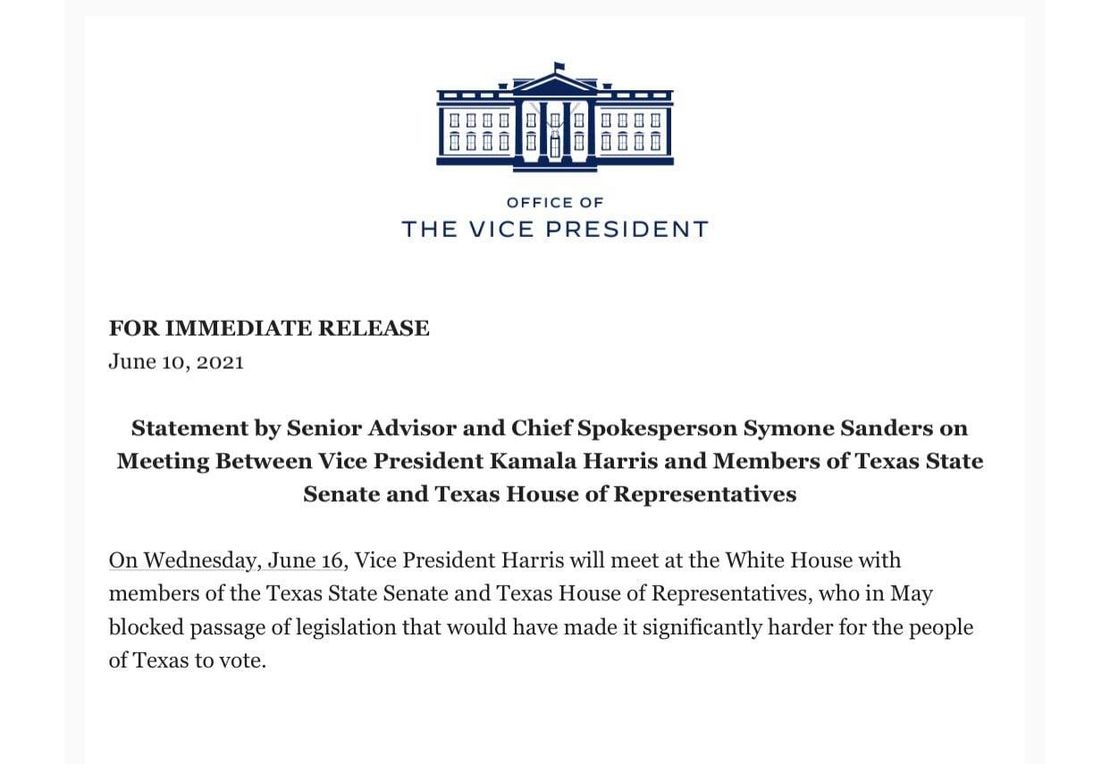 Even worse than taking a partisan meeting with border state officials while refusing to visit the border in full crisis on her watch, a source tells PJ Media that Harris’s office has drawn the line for invitations for meeting with her on a racial line. Out of all of the Democrats in the Texas Legislature, just one white member — state Rep. Chris Turner of Tarrant County — has been invited. Is Turner a token? That’s what a lot of Democrats want to know.

The invitation to Turner may have been extended to avoid the Lightfoot problem. Recall that Chicago’s Democrat mayor, Lori Lightfoot, has gotten into media and legal hot water for explicitly banning interviews with white reporters. Racist policies don’t stand up to court review and haven’t for decades now, as Lightfoot is learning. Perhaps Harris will learn the same lesson soon.

Or…well, this is the same person who thought it was a good idea to distribute these culinary horrors.

@vp made an OTR visit to the back of the plane and delivered cookies decorated with the shape of her likeness as well as AF2. pic.twitter.com/TQrUR47Vgc

We can expect next Wednesday to be busy. With Harris meeting with Texas Democrats a couple thousand miles from the border, which her boss threw into crisis, and Democrats who weren’t invited to meet with her fuming about it, she’ll create more divisions within her already fractured party. Gov. Greg Abbott has announced that Texas will build the border wall that Biden stopped, and it’s likely he’ll have something newsworthy to say about the alleged vice president’s meeting. Perhaps he’ll even meet with some of the Democrats Harris left off her invitation list.

Bryan Preston is the author of Hubble's Revelations: The Amazing Time Machine and Its Most Important Discoveries. He's a writer, producer, veteran, author, and Texan.
Read more by Bryan Preston
Tags: BORDER CRISIS