Welcome to Insanity Wrap, your daily dose of the best of the worst. Joe Biden’s Dementia Vacation is today’s big crazy.

Before we get to Biden’s Dementia Vacation, one quick can’t-miss video clip.

So that’s a thing we’ve all seen now.

Joe Biden’s Dementia Vacation: Another Damn Thing We Have to Be Concerned About

G7 Is More A G6.5 With The Cognitively Challenged Biden In Attendance

The early reports from the G7 summit are coming in, and they don’t look good for Presidentish Joe Biden.

Human Events editor Jack Posobiec has become the ear of an unnamed White House official, and while we’re usually hesitant (at best) to go with anonymously sourced material…

…well, this stuff is just too juicy and too much on Biden’s brand to ignore.

In fairness, Biden does like to make stuff up. Whether Biden is pathological, pranksterish, or demented, Insanity Wrap has no idea.

The only sign Insanity Wrap has seen that Biden is on top of things is that he reportedly derailed a conversation Johnson wanted to have about the origins of the Wuhan Virus. Did it really escape from a Communist Chinese lab? Was it released on purpose in the first-ever incident of Global Biological Warfare?

When Johnson suggested a “possible US-UK led commission on COVID origins,” one with “no UN meddling,” Biden reportedly shut Johnson down to talk about “BLM in the UK and Pride month” instead.

It’s a good thing DOCTOR Jill did her homework, we suppose.

“Nick” is English slang for “steal,” although the word we’re really looking for here is “plagiarize.”

Biden has a history of just that.

They say you can’t teach an old dog new tricks, but what if your dog has gotten so old that he thinks his old tricks are new?

So in all fairness, maybe President Porchlight doesn’t remember that he had to give up his first presidential race, way back in 1987, because he’d plagiarized another Brit pol, Neil Kinnock.

Maybe he doesn’t remember that plagiarism is wrong.

Hey, at least he remembers he likes ice cream.

Kamala Snaps At Reporter For Asking When She Will Visit Border

Today’s craziest person in the world is not alleged Vice President Kamala Harris, who, after all, was sane enough to quit her presidential race weeks before the caucusgoers of Iowa had a chance to humiliate her.

Although she did give up a cushy Senate gig, one with few responsibilities, and basically a lifetime appointment from California voters. Even better, being a senator gave her a profile low enough that she could usually hide just how freakin’ bad she is at politics.

So Insanity Wrap has to dock her a few points for that one.

Today’s craziest person in the world is anyone still on board the Kamala Train, which is a lot like California’s never-to-be-completed semi-high-speed rail system, except that Harris manages to somehow be both less competent and more sordid.

That includes you, Ilia Calderón, who reportedly wept tears of joy during Harris’ inauguration.

The point is this: If Dan Quayle had actually been as ignorant and mush-mouth as the press made him out to be, he’d be Kamala Harris.

We let this happen.

Marxists, whether wearing the drag outfits of progressivism, wokeness, or Critical Race Theory, have taken advantage of our good natures.

That’s changing. People are waking up.

What the Marxists forget is the lesson burned into the histories of Germany and Japan: When you piss off good-natured people enough, we suspend our good nature long enough to set things right.

Insanity Wrap isn’t encouraging violence here. We’re just hoping these infiltrators are driven completely from public life and back under the rocks from whence they came.

And it’s already starting to happen, as you’ll see in our next item.

Previously On Insanity Wrap: The Scale of COVID Unemployment Fraud Is ASTOUNDING

We’re seeing more and more parental pushback around the country against insidious Critical Race Theory instruction in our public schools.

This next bit is good, too, and deserves an Insanity Wrap shout-out:

In what some families ripped as the Department of Education’s latest smothering of advanced academics, Lab Middle School for Collaborative Studies principal Megan Adams emailed parents that “we will no longer have leveled math courses at Lab Middle School.”

“I know this is a change,” she wrote, without offering any rationale for the move. “I assure you that this decision was not made lightly.”

Former Lab teacher Maggie Feurtado, who founded the program roughly a decade ago before retiring this year, said she was “simply appalled” by the weekend announcement.

“This is all in the name of equity,” she told The Post. “And it’s likely coming from above. But it’s misguided. Having everyone in the same class hurts everybody.”

Adams has now semi-backed down, and calls the announcement “premature.”

Keep pushing, parents, and they’ll back all the way down.

You Can’t Have Diversity in Here, This Is the Black Caucus!

Diversity wanted in everything but thought. 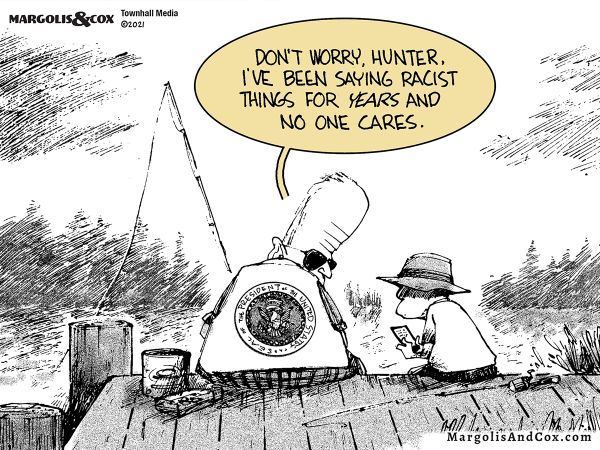 It isn’t news when a Trump son-in-law brokers peace between Israel and seven Arab nations, and it isn’t news when a Biden son reveals himself to be a stripper-impregnating, child-support-avoiding, sex-tape-producing, drug-addicted racist.

Because, really, the goings-on of the president’s family members are really none of our business.

If you enjoy Insanity Wrap, Stephen Kruiser’s Morning Briefing, and headline news from PJ’s growing stable of writers, you’ll love our exclusive content — like video podcasts and live chats with your favorite writers — available just to our VIP members.