Most Americans of all backgrounds support the police. They recognize that without the police, criminals would have free reign. Many also recognize that minority communities would be the hardest hit if crime returns to its 1990s levels

Rasmussen is out with a new poll today showing erosion for the “defund the police” movement, which has never had close to majority support despite the heavy media support it has been given and the traction it has gained at city halls within larger cities.

The latest Rasmussen Reports national telephone and online survey finds that 66% of American Adults now oppose reducing the police budget in the community where they live to channel that money into more social services. That’s up from 59% in early June when we first asked this question. Just 23% favor defunding the cops where they live, down from 27% in the previous survey. Eleven percent (11%) are undecided.

Rasmussen’s poll comes after eight weeks of roiling violence and damage in many cities including Portland, OR, and Seattle Mayor Jenny Durkan allowing protesters to take over several blocks of downtown Seattle for several weeks. Cities across the country have allowed rioters to destroy statues and deface monuments. The poll also comes after police nationwide have been opportunistically blamed by some for the terrible actions of a few.

The descent into anarchy has made police more popular with most Americans. A majority of black Americans — 57% — oppose defunding according to the poll. Many celebrities who support defunding the police can afford their own private security, and do not live anywhere near the communities that would be most affected. The Minneapolis city council voted to defund the police but hired private security for themselves.

Democrats remain either in denial or are taking a politcal rather than a legal or practical position on defunding police. Despite night after night of violence in Portland, and the Democratic mayor’s refusal to do anything about it, Oregon’s Dem. Rep. Earl Blumenaeur took to the floor of the U.S. House to declare that Portland “is not out of control.”

Oregon's @repblumenauer: “Portland, Oregon, is not out of control.” pic.twitter.com/lGidJ0rDP7

Jeff Reynolds recently surveyed the damage antifa and BLM activists have done in Portland — as of July 9. It has only gotten worse since. The images of widespread graffiti suggest Portland is in fact out of control and has been for weeks.

The Los Angeles Teachers Union is opportunistically using the leftist fringe “defund” movement to keep schools closed this fall. The union’s list of demands has nothing to do with stopping the spread of coronavirus. 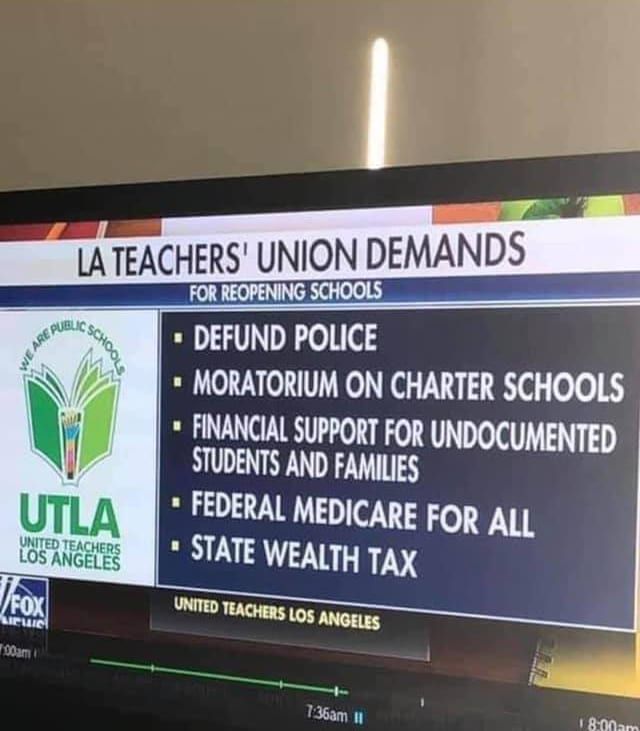 The union, like city councils that are defunding police, are taking a political stance that will hurt millions of Americans. The union’s actions amount to an illegal strike, and they should be fired and the union forced to disband.

All of this presents an opportunity for President Trump and the Republicans. Stand with the police, stand for sensible reforms, and stand for restoring order.