It’s open season on police nationwide since the peaceful protests over the killing of George Floyd devolved into violent, deadly anarchy. This fact did not stop police in Austin from putting their bodies on the line to protect protesters who had gathered outside police headquarters Tuesday night.

Protesters have gathered outside the police headquarters every night since the protests and riots began, sometimes blocking nearby Interstate 35 and setting fires underneath the key highway. Tuesday night seemed to be peaceful, until a truck headed straight for the crowd.

The Austin Police Association wrote about the incident shortly after it happened. 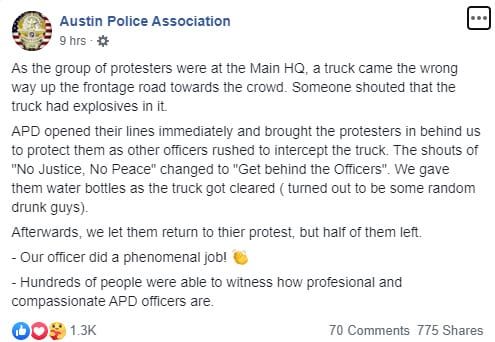 Local media picked up on the story, you can watch one report about it here.

The fact is, police put their bodies on the line for the rest of us every single day. It’s usually not so stark or obvious as in this case, with a truck barreling toward a crowd of people, but they do. APD saved lives last night. The protesters noticed immediately, changing their chant and heeding the officers’ instructions. Thankfully, there were no explosives.

Result: No lives lost. Proper arrests made. Goodwill between police and protesters builds up a little bit.

In San Antonio at about 10:30 last night, a group of protesters broke curfew and marched toward the Alamo. I watched as it unfolded on Facebook Live.

The Alamo Cenotaph, the tall Depression-era statue out front, was defaced with leftist graffiti explicitly denouncing the Alamo late last week. Rioters defaced the World War II and Lincoln memorials in Washington over the weekend, and have defaced numerous statues and monuments around the country, an obvious effort to destroy American history.

Antifa has threatened the Alamo for several years. As an icon of Texas history — but which leftists have dishonestly reinterpreted as a symbol of white supremacy despite the fact that Tejanos fought and died there for the Texas cause against dictator Santa Anna — the Alamo is an obvious target. It’s also a 300-year-old Spanish mission that has survived battle and is extremely delicate, requiring constant preservation and maintenance work.

Those marchers knowingly broke the curfew and marched up to a line of San Antonio police roughly a block from the Alamo and began shouting slogans. Some demanded that the police kneel to them. In the video, one leading protester clearly calls the police officers the n-word. At least one bottle flew out of the crowd toward the police line. Police reinforcements quickly moved forward to close gaps, and then apparently fired a flash-bang and pepper balls. The crowd fled quickly, and police marched down a couple of streets to move their protective lines forward and away from the Alamo. Textbook riot-control operation.

Result: No lives lost. No damage to the Alamo.

There will be second-guessing; an SAPD reportedly used rubber and wooden non-lethal projectiles to move the crowd. The bottom line is that by being decisive, they saved lives and protected the Alamo and businesses in the surrounding area.

Riots Crisis: Don’t Let the Moral Idiots Guilt You Into Anything