At this point, I have written volumes about my dislike and distrust of one Anthony “The Real Dr. Faustus” Fauci. Believe me, I would love nothing more than to not have to write, discuss, or think about this awful bureaucrat. Sadly, the alleged physician doesn’t know how to stop saying stupid, conflicting, and usually horrible things.

As long as he keeps that up, I’m going to need the catharsis of writing about it. Trust me, it’s best that way.

Earlier this year, I titled one of my Morning Briefings “Get Ready for COVID-19 Variants Panic-Porn Perma-Mandates.” Among other things, I wrote, “Sometime last December I realized they were going to look for ways to keep terrorizing the public in the name of public safety.” The variants are the obvious way to do that. Viruses mutate, variants and subtypes abound. If they happen upon one that mutates a lot they can pretty much just sit on the tyrannical panic button for a while.

If one pays close attention to Anthony Fauci it’s easy to get the sense that he is more gleeful than concerned about the Delta variant of COVID-19. It keeps him in the spotlight and in a position to strongly hint that the petty tyrants at all levels of government should keep up the heavy-handed work.

Lost in Tuesday’s hoopla about the resignation of Andrew Cuomo and the nightmarishly expensive — cough cough — infrastructure bill was a disturbing appearance by Fauci on MSNBC’s “Morning Mr. Mika” program. Fauci finally admits that he’s “sorry” and he knows that although “people must like to have their individual freedom,” it’s time for mandates anyway.

A tweet from an old Twitter acquaintance of mine perfectly demonstrated precisely how exasperated the public is with this guy: 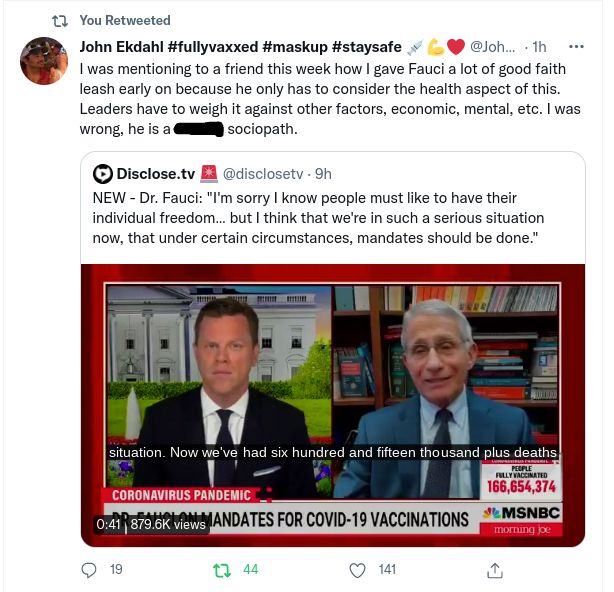 Bingo. Enough slack has been given to Fauci. If he can’t be deposed from the position of power that he’s been given, maybe more people can begin to tune him out. As I’ve said about him before, only in the federal bureaucracy can someone be this incompetent and wrong all the time but get more power.

This guy has got to go.

NEW – Dr. Fauci: "I'm sorry I know people must like to have their individual freedom… but I think that we're in such a serious situation now, that under certain circumstances, mandates should be done."pic.twitter.com/gSvfFDYIOr

PJ Media senior columnist and associate editor Stephen Kruiser is a professional stand-up comic, writer, and recovering political activist who edits and writes PJ's Morning Briefing, aka The Greatest Political Newsletter in America. His latest book, Straight Outta Feelings, is a humorous exploration of how the 2016 election made him enjoy politics more than he ever had before. When not being a reclusive writer, Kruiser has had the honor of entertaining U.S. troops all over the world. Follow on: Gab, Parler, MeWe
Read more by Stephen Kruiser
Tags: COVID VACCINE
SHOW COMMENTS