The Fate of #NeverTrump Republicans Provides a Little Bit of Schadenfreude

#NeverTrump should have ended on election night 2016 for Republicans. For many of us, it did. Most of us have never rooted for a president to fail in his leadership of the country and the free world, even when our preferred candidate didn’t win. Yet the Never Trump movement persisted after the election. It is a group made up of former GOP consultants who didn’t make the cut with President Trump. So, they banded together to actively root for his defeat and failure.

A record number of judicial appointments, pro-life policies, massive deregulation, and a record-setting economy didn’t change their minds. They spent four years treating their former political allies with contempt and taking money from a prominent Democrat donor. Their flagship publication, The Bulwark, attempted to lecture Republicans about principles they had supposedly abandoned as defined by their intellectual betters.

Some of the most prominent members formed the Lincoln Project and collected millions of dollars from #Resistance Democrats. Then they actively supported Joe Biden. They endorsed the same man that voted with segregationists, eulogized an Exalted Cyclops in the KKK, and earned the endorsement of Richard Spencer in 2020. All while they called President Donald Trump an irredeemable racist.

They also launched campaigns against vulnerable Republican senators up for reelection in 2020. They created ads, attempted to be pithy on social media, and displayed every bit of boorishness they accused President Trump of. Their stated intention was to eject President Trump, retake the Republican Party, and regain their own prominence in defining the party agenda.

They sold themselves to the #Resistance by selling their own supposed influence over Republican voters. They took in donations, paid themselves gobs of money, and essentially became grifters of extraordinary skill. Their Twitter accounts became overwhelmed with Democrat supporters who shelled out the cash but never seemed to notice that the Lincoln Project did not engage many Republicans in an influential way.

They did nab a few former GOP leaders the base had already rejected like former Senator Jeff Flake and former Ohio Governor John Kasich. Then they flaunted them at the Democrat National Convention, thinking it might encourage some share of Republican voters to embrace a man with dementia who picked a socialist as a running mate. This bold strategy went down in flames.

Now it seems these #NeverTrump Republicans will not continue to be embraced by their new benefactors with open arms. They produced absolutely nothing. In fact, it appears that Republican support for President Trump this cycle increased from 90% to 93% according to exit polls. Editor at large at the socialist publication Jacobin Magazine, David Sirota, noted:

Their [The Linocln Project] ads focused on trying to court disaffected Republican voters and attack Trump’s character, as Biden loaded up the Democratic convention with GOP speakers. When polls during the summer showed that the strategy wasn’t working, galaxy brain Rahm Emanuel defended it to a national televised audience, insisting that 2020 would be “the year of the Biden Republican.”

Now survey data show the strategy epically failed, as Trump actually garnered even more support from GOP voters than in 2016. Indeed, Edison Research exit polls on Tuesday found that 93 percent of Republican voters supported Trump — three percentage points higher than in 2016, according to numbers from the same firm.

The takeaway: There may be a lot of so-called “Never Trump Republicans” promoted in the media and in politics, but “Never Trump Republicans” are not a statistically significant group of voters anywhere in America. They basically do not exist anywhere outside of the Washington Beltway or cable news green rooms — and after tonight’s results, we shouldn’t have to see them on TV or even see their tweets ever again.

You might have thought you would never agree with a socialist, but it seems we can agree on #NeverTrump Republicans. There was enough condemnation from the left on election night that it is doubtful we will be able to mock Rick Wilson’s segments with Don Lemon or Steve Schmidt pontificating on MSNBC. Angelo Carusone, president and CEO of Media Matters, summed it up perfectly: 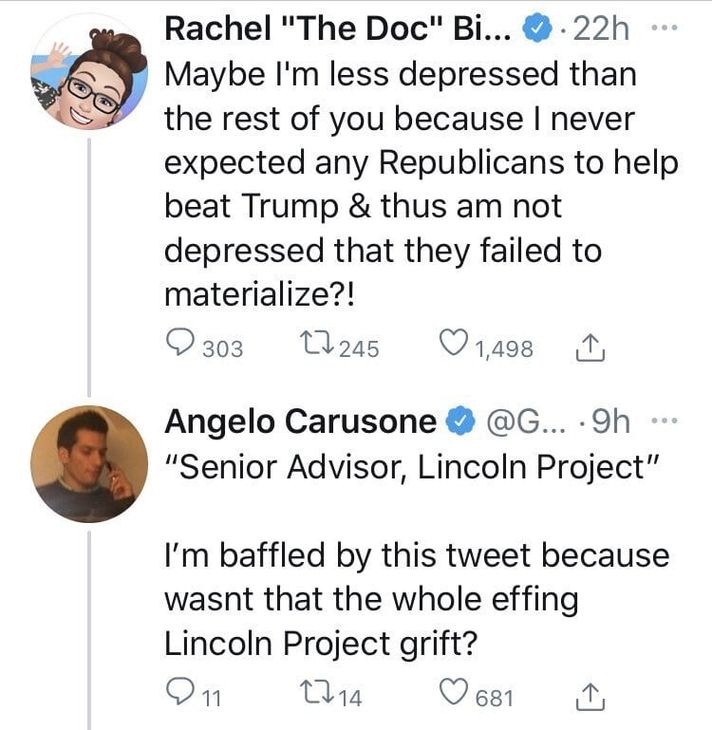 Yes, Angelo, that was their entire grift. And it is rather hysterical the amount of money lefties flushed down the toilet to support the grifters and their consulting firms. Hopefully, these former GOP consultants invested wisely because their credibility with their new lefty benefactors is shot.

And they should not be welcomed back into the GOP under any circumstances, no matter what the outcome of this election is. They dislike the coalition of working and middle-class Americans gravitating to the Republican Party just as much as the rest of the Washington, D.C., elites do. Their commentary has been denigrating and rude toward large swaths of middle America. Let them stay in their coastal bubble and lunch alone as isolation is what they so richly deserve.