Is Obama as Bad as Carter? No, He's Worse 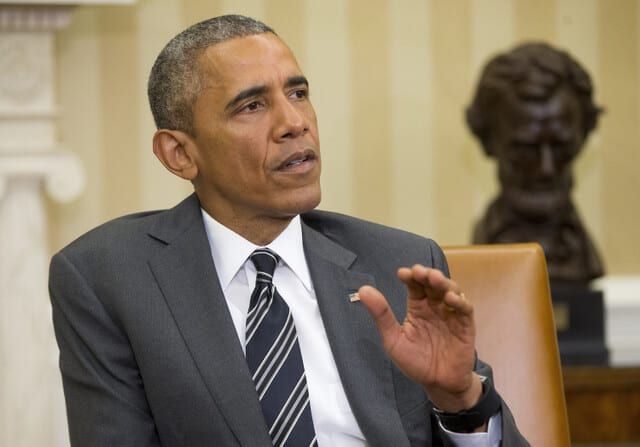 Conservatives have long attacked President Barack Obama by comparing him with Jimmy Carter. Obama seemed to be following in Carter’s footsteps, becoming a failure both at home and abroad. That comparison is mistaken, however. Obama is far worse than Carter.

In the late 1970s, Carter came to represent American weakness abroad and decline at home, from the Iran hostage crisis to the terrifying effects of “stagflation.” The late Obama years have seen the rise of the Islamic State (ISIS), Russia’s posturing in Ukraine and Syria, and a tremendously sluggish “recovery” with low labor participation rates.

In Carter’s last years, however, he changed course — beginning the policies which, under his successor Ronald Reagan, would reinvigorate both the economy and American presence around the world. By this measure, Carter achieved a much better legacy, and Obama would be hard-pressed to catch up.

While America suffered throughout the Carter years, in 1979, U.S. setbacks around the world reached fever pitch. As the year opened, Cuban troops were roaming Angola, and a pro-Communist regime ruled Ethiopia. Then the Sandinistas won in Nicaragua, leftists took control in Grenada, Soviet Russia invaded Afghanistan, and in November an Iranian mob captured the U.S. embassy and took over 60 American hostages.

President Carter had campaigned against the “intellectual and moral poverty” of the allegedly over-aggressive Nixon and Ford administrations. In 1977, Carter declared that America was “now free of that inordinate fear of Communism” which had led his predecessors to confront the Soviets. After 1979, however, he changed course completely.

In his 1980 State of the Union address, Carter stood up to the Soviets and drew a clear line in the sand. “Let our position be absolutely clear: An attempt by any outside force to gain control of the Persian Gulf region will be regarded as an assault on the vital interests of the United States of America, and such an assault will be repelled by any means necessary, including military force.”

This “Carter doctrine” showed that America meant business — and it reinvigorated our position around the world. It was a sea change — night and day — for Carter’s foreign policy, and it set the vital groundwork for Reagan’s final victories over the Soviet Union later that decade.

In that speech, Carter laid out a comprehensive program to check Communism throughout the world. He announced a 5 percent increase in defense spending, which angered many of his fellow Democrats in Congress. The president also declared an embargo on grain and agricultural technology to the Soviet Union.

Carter even withdrew from the Senate the premier diplomatic goal of his presidency — the second stage of the Strategic Arms Limitation Treaty (SALT II) with Russia. He accepted that the treaty would not pass and moved on to other things.

Finally, a U.S. boycott of the 1980 Moscow summer Olympics became the symbolic coup de grace. America was back, and swinging. As James Kirchick wrote in the New York Daily News, Carter’s last year in office laid the vital groundwork for Reagan, whom conservatives rightly credit for ending the Cold War.

“To the extent that the collapse of the Soviet Union was brought about by American policies and not the internal contradictions and weaknesses of the communist system itself (a debate that engages historians to this day), the last year of the Carter administration laid the groundwork,” Kirchick explains.

Despite facing similar problems, President Obama has not decided to boldly reverse his policies as Carter did. As Kirchick wrote, “it is an indication of just how worrisome the situation is that many in Washington are pining for the resolve and fortitude of Jimmy Carter.”

Indeed, the similarities between 1979 and 2015 are astounding — Russia has invaded a neighbor and is posturing in the Middle East, a radical ideology has toppled governments across the world, and the president is pushing an unpopular deal with an adversary that cannot pass in the Senate.

Carter changed his tune, toughened up and set a path for Reagan. Obama has doubled down, even forcing the Senate to try (and ultimately fail) to overturn his veto on the Iran deal. Carter faced the Soviets and gave them an ultimatum; Obama told Russian president Vladimir Putin that he is “prepared to work with him.”

Obama took one hard position — his “red line” pledge in Syria, warning that if Syrian president Bashar Assad used chemical weapons on his people, the United States would respond with force. Putin proposed a deal which purported to result in a removal of Assad’s chemical arsenal, but in 2014, reports surfaced of “toxic chemicals” used against civilians. Worse, ISIS has repeatedly attacked both government troops and civilians with chemical weapons. Obama has done nothing in response to these flagrant violations of “American national security.”

Despite Obama’s insistence that President George W. Bush left him a “disaster” in Iraq, U.S. forces had largely pacified the country following the 2007 “surge.” Obama’s hasty decision to pull out in 2011, rather than reach an agreement to leave a stabilizing American force in the country, opened the door for ISIS. Repression from the Shia government triggered a terrorist response from the Sunni minority. Now, ISIS has established an Islamic caliphate in the region, inspiring terror attacks across the globe.

Carter himself rebuked Obama for waiting too long to confront ISIS. “We let the Islamic state build up its money, capability and strength and weapons while it was still in Syria,” allowing the terrorist group to move into Iraq and seize vast amounts of territory.

In a terrifyingly prescient comment, Carter added that “you have to have somebody on the ground to direct our missiles and to be sure you have the right target.” His words proved prophetic multiple times in the last few years, most notably when an American airstrike hit a Doctors Without Borders hospital in Kunduz, Afghanistan last week.

With Carter, “when it became clear his approach was advancing neither peace nor prosperity, he was willing to change course,” as William McGurn wrote in the Wall Street Journal. Obama, however, seems unlikely to do so.

Kevin Portteus, associate professor of politics at Hillsdale College, explained why Barack Obama might be more obstinate in his political programme than Jimmy Carter. “While Carter was more of a product of the New Deal-consensus period in American politics, Obama is explicitly a product of the New Left thought and activism of the 1960s and 1970s,” Portteus wrote in an email statement to PJ Media.

This generational gap between Carter’s “Old Left” politics and Obama’s more radical “New Left” ideas helps explain why Carter would be willing to change his tune while Obama might prove more obstinate. It also points to two different priorities between the two presidents.

“While Carter feared a ‘crisis of confidence’ on the part of the American people in America, Obama rejects the idea of American exceptionalism or the basic goodness of the American idea,” Portteus argued. Carter valued America and genuinely wanted to promote the interests of the United States, while Obama followed “the New Left’s rejection of western and American civilization and its embrace of the ‘other,’” the professor alleged.

In a perhaps even more contentious statement, Portteus added, in no uncertain terms, that “Obama is openly contemptuous of Republican constitutional government.”

“He has contempt for government by consent when the people do not consent to the policies he believes should be implemented,” the professor explained. Obama “is completely uninterested in adhering to the forms of the Constitution, to the point of being incredulous that anyone would care about those forms.”

Before dismissing these comments as mere partisan invective, a careful reader should consider Obama’s reach for executive authority when Congress (the body which makes the law under our Constitution) does not agree with him.

In November of 2014, the president published an executive order taking action on immigration after “comprehensive immigration reform” failed to pass in Congress. With the Iran deal, Obama received enough Democrat support to effectively block Senate disapproval, even though a majority of senators opposed the deal. These actions follow a tenure in which Obama’s attorney general altered the meaning of Obamacare in order to get the individual mandate upheld by the Supreme Court, and during which Obama changed the law while it was being implemented to make it less unpopular.

Finally, the president announced last week that he is considering using an executive order to expand background checks in the purchasing of firearms, a policy which failed in Congress in 2013, but which gun control advocates continue to push.

Rather than altering his policies for the good of the people, Obama persists, aiming to enshrine his agenda in law, with or without the Constitution. Compared to the rule of such an ideologue, the Carter days may be good indeed.