The Language of Taxation Needs an Overhaul

Imagine, if you can — and given the likely results if cap-and-trade legislation recently passed by the House ever makes it into law, you don’t have to imagine very hard — that after paying $500 a month for utilities, your household is slapped with an increase that will cause your monthly bills to go up to $750.

How much have your costs increased? That’s obviously not a trick question; the answer is 50%.

But that’s not the language of taxation. That needs to change.

If your neighbor tried to console you with such language and said, “What’s the big problem here?,” you’d be tempted to deck him or even her (but being a sensible person, you’d resist) — especially because (and I’ll get to this later) such an increase would force you to cut your discretionary spending by way more than 5%. Yet we let politicians get away with taxation verbiage like this all the time. This serves to make their seemingly endless designs on the contents of our wallets appear more palatable than they should.

The last time I recall a real pushback against this mathematical chicanery was in Ohio during the early 1980s. Helped along by political clumsiness, the blowback was effective enough that it should have been considered a model for future anti-tax efforts. Instead, it has mostly fallen into the dustbin of history.

But to measure the tactic’s effectiveness, all you have to do is ask almost any news-following longtime Buckeye State resident older than 50, “Who raised Ohio’s income tax by 90%?” The overwhelming odds are that they will answer, “Oh, that was Dick Celeste.”

Now, of course, Celeste didn’t take 90% of Ohioans’ income (though, given his far-left political positions, he may at some point have been tempted). Also, nobody ever said he was the brightest tactician. In 1983, shortly after winning office, Celeste, with the help of a slim majority of Democrats in the Ohio Senate, imposed a “temporary tax rate surcharge [that was] increased to 83.3% in 1983 and to 90% in 1984 and made permanent.”

Celeste and the Democrats protested that 50% of that 90% was “only” a continuation of a “temporary” tax passed by the previous administration, and that the other 40% was “only” a rate hike of a couple of percentage points.

The complaints fell flat. Everyone in the state knew that what the Democrats had imposed was a permanent tax increase of 90%. Because it was applied across the board to all rate brackets (that was the clumsiness, partially inherited from clumsy Republicans), even those who supported it had a hard time not speaking of the truly correct 90% increase.

William Hershey of the Dayton Daily News, who seems more than a little bitter, recalled last month that:

Democrats controlled the Senate by just one vote, 17-16. All 17 voted for Democratic Gov. Dick Celeste’s so-called “90 percent tax hike” — a renewal of a temporary income tax increase plus an increase. None of the Republicans voted for it.

Senate Republicans used the tax issue to grab control of the Senate in the 1984 elections and have maintained that majority for 25 years. The way the Republicans told the story, every Democratic senator who voted for the tax increase and was up for re-election cast the 17th and decisive vote.

The tax changes proposed by Congress to fund its statist designs on health care represent a clarion call to resurrect the just-described language.

Though the draft bill has been released, it’s clear that the legislation will go through the usual sausage grinding. So for simplicity’s sake, I’m going to use these core elements of what House leaders want as the Wall Street Journal understood them on Monday:

Since the tax-and-spenders are more clever, it’s not easy to frame these rate increases as tax increases. But it can be done — and I will do it.

Let’s take someone who would be subject to all of the taxes noted above; there are plenty of small businesses whose owners pay themselves well but who, for various reasons (which, frankly, should be none of our business), don’t offer their employees health insurance. Using rates currently in effect and the proposed rates as calculated by the Journal, this would be the before-and-after picture for such business owners in Ohio who are considering withdrawing additional salary: 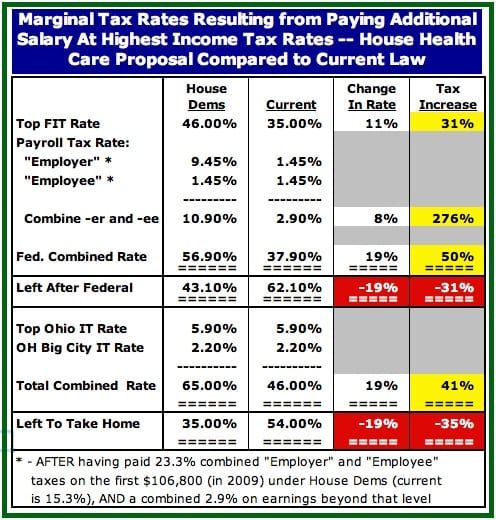 Now you see how really devastating the House’s proposal is:

In sum, Congress wants to make a very small percentage of people pay roughly 50% more to the federal government than they do currently and, depending on their state of residence, to take about one-third of what they currently live on — all to fund other people’s health care.

Now that is an opposition message that would, I believe, go a long way towards stopping this utter nonsense dead in its tracks.