How Thatcher Changed Hearts and Minds Behind the Iron Curtain

It wasn’t just Margaret Thatcher’s steadfast economic and foreign policies that helped to defeat the Evil Empire and to bring down the Iron Curtain. She also changed hearts and minds — and this PJ Media author, who grew up on the other side of the Iron Curtain, has a personal story to tell.

As many Soviet kids did in the 1970s and 1980s, I occasionally tuned my shortwave radio to Voice of America or the BBC Russian Service, hoping to hear their alternative take on world events and, if I was lucky, get the latest rock-music updates. One of the functions of the Iron Curtain was to keep us, the “builders of communism,” blissfully unaware of the outside world. All our news had to be processed by the state-run media filter and approved by the formidable censorship apparatus.

In contrast, foreign Russian-language radio broadcasts, courtesy of Ronald Reagan and Margaret Thatcher, gave us unfiltered news and commentary. These programs were to the Soviets then what Rush Limbaugh and Fox News are for many Americans today — a gasp of fresh air for some, enemy propaganda for others, and an object of demonization for the official state-run media.

Produced mostly by ex-Soviet exiles, these broadcasts never failed to satisfy my curiosity. The problem was that our government was mercilessly jamming their signal. I learned that this radio jamming was more costly than the actual broadcasting, but no expense was spared to maintain our ideological purity, paid for by our own tax rubles. Oh well, at least we knew the Motherland cared.

At times the broadcast quality was almost undecipherable: imagine trying to watch a movie while your neighbor mows his lawn. The noise occasionally trails off to the other end of the property, but mostly it hovers below your window, and you know that the lines you missed had to be the best.

A few times my friends and I tried to tape these programs simultaneously in our homes, so that later we could combine salvageable parts from two or more reels. That resulted in a much clearer compilation. We mostly did this for rock and roll programs, but political commentary would get into the mix as well — and it was just as fresh and exciting.

If we had ever been caught, we could have been easily expelled from our state-run schools (paid for by our tax rubles) and become marked for life as “politically unreliable.” But we were too young and too reckless to think about it.

Whenever tuning to Voice of America or the BBC Russian Service produced nothing but the made-in-the-USSR rattling chatter, I would switch to English broadcasts. These were coming through clearly, mostly because the government couldn’t jam every single frequency. They also helped me with my English studies.

Apart from music tapes, radio was my only source of authentic spoken English. The Iron Curtain made sure that even if a real English-speaking person were to visit my Ukrainian city, he or she would be supervised at all times by authorized personnel. Similarly, foreign travel for the “builders of communism” was out of the question: even if we could make it past the border alive, we would have no means to move around, since almost all of our earned income went to the government so it could provide us with our basic needs — such as, ensuring our ideological purity by jamming radio broadcasts for our own good.

One night — it had to be late 1982, when Margaret Thatcher was running for her first re-election — my shortwave radio caught a BBC broadcast of the Iron Lady’s campaign speech.

To be sure, all my prior knowledge about Margaret Thatcher was limited to her unflattering portrayal in the official Soviet media. She busted the unions, privatized the economy, and was a sworn enemy of the USSR and socialism in general. In fact, the very moniker — the Iron Lady — was  given to her by the Soviet Army newspaper Red Star in 1976, before she even became prime minister. Later I also learned that she readily took it on as her own, telling parliamentary constituents a week later that she was proud to wear a “Red Star” evening gown and to serve as “the Iron Lady of the Western world.”

Listening to Thatcher speak confirmed everything the Soviet media was reporting about her, and more. In a deep, powerful voice, she accused her socialist opponents of destroying the British economy through nationalization and presented the proof of how privatizing it again was bringing the economy back to life. The free markets worked as expected, making Britain strong again. The diseased socialist welfare state had to go, to be replaced by a healthy competitive society.

To the average consumer of the Soviet state-run media, that didn’t make any sense. When exactly had Britain become a socialist welfare state? That part never passed the Soviet media filter. Our media had made it explicitly clear that all Western nations, especially Britain and the United States, were officially governed by the ideology of anti-communism and unfettered capitalism. Their ruling classes had established the ultimate police states in order to protect the sanctity of private property — a criminal misconception which allowed the few rich, cigar-smoking, top-hat-wearing fat cats to brutally exploit the powerless masses.

So if everything had always been in private hands, what exactly did Thatcher privatize? And where did the free, cradle-to-grave government services come from?

Gradually, the news sank in: if Britain was indeed a socialist state, then everything we were told about the outside world was a lie. And not just any lie — it was an inconceivably monstrous, colossal lie, which our Communist Party and the media thoroughly maintained, apparently, to prevent us from asking these logical questions: if the Brits also had free, cradle-to-grave entitlements like we did, then why were we still fighting the Cold War? And what was the purpose of the Iron Curtain? Was it to stop us from collectively surrendering to the Brits, so that their socialist government could establish the same welfare state on our territory — only with more freedom and prosperity minus the Communist Party?

The next logical question would be this: if Great Britain wasn’t yet as socialist as the Soviet Union, then didn’t it mean that whatever freedom, prosperity, and working economy it had left were directly related to having less socialism? And if less socialism meant a freer, more productive, and more prosperous nation, then wouldn’t it be beneficial to have as little socialism as possible? Or perhaps — here’s a scary thought — to just get rid of socialism altogether?

And wasn’t it exactly what Margaret Thatcher was doing as a prime minister?

What started with me listening out of curiosity ended up with a sudden realization that she was right on all points. I instantly became Thatcher’s fan. The experience was inspiring. I remember how on the following day in school I described that speech to my friends, argued the prime minister’s points, and even attempted a voice impression, emphasizing the confident manner in which the Iron Lady spoke. Never before had I heard a speaker so full of conviction.

I then began to suspect that all the unorthodox things the Soviet reporters attributed to Ronald Reagan — his radical positions on the economy and fighting the Cold War — might be true as well. The same reporters earlier described Jimmy Carter as an evil imperialist warmonger, so I initially doubted their coverage of Reagan. What government official would ever advocate for a smaller government? It seemed too fantastic to be true. But this time the media got it right — which, by my newly discovered standards, made Reagan a good man and a wise leader. It’s those whom the Soviet media praised that were the real trouble.

After I moved to the United States years later, I also discovered Ayn Rand, Milton Friedman, Friedrich Hayek, and Ludwig von Mises. But Thatcher was one of the earliest prominent guideposts in my intellectual journey, for which I am forever grateful.

Recently I had a rare opportunity to repay my debt.

Among the many parodies of Obama’s “Hope” poster I made during the 2008 elections was Margaret Thatcher’s stylized image captioned as “Iron.” It eventually became a popular selling item at the People’s Cube online store, with many orders coming from Great Britain. 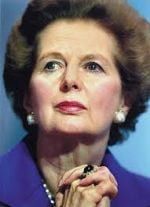 A few weeks ago I was contacted by a board member of the Grantham Museum in England, who asked for permission to use this image in the museum’s campaign for a Margaret Thatcher statue in Grantham, Lincolnshire, where the Thatcher was born and raised.

In addition to sending the museum a revised, cleaned-up graphic to be used on its fundraising merchandise, I also designed its web banner, which the museum now uses to brand its Margaret Thatcher project on its website, Facebook page, and the campaign video. 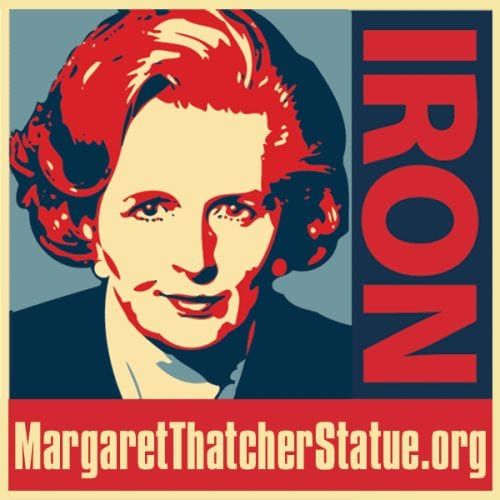 Unlike the current U.S. president, Thatcher didn’t have a well-oiled propagandistic social media organization in the style of OFA. Nor did the “progressive” world media advance and reverberate her message; that free service is reserved for the political left only. For Thatcher, it was quite the opposite.

And yet she exerted great influence over people. She did it merely by being who she was: informed, unwavering in the face of adversity, brave in defending the truth, and confident in her belief that the free markets are a force for good, while socialism is a force for evil. A few Western leaders may have agreed with her in private, but they didn’t have the courage to say it openly in the twisted moral climate brought on their countries by the false promise of socialism.

What Thatcher showed to these men is that when one has no fear of speaking the truth and possesses enough moral conviction to push back, miracles happen. Britain’s resurrection as an economic powerhouse was one of them.

Her message came through despite all the hostile efforts to jam it around the world, shattering not just the Western establishment’s media filters, but the Iron Curtain itself.

It still resonates; if only today’s leaders could listen.