Radical Islam's War against the Past 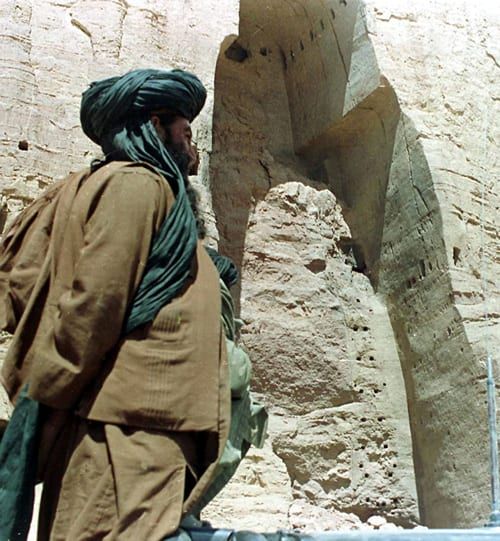 Taliban soldier stands in front of an empty shell of a destroyed Buddha statue in Bamiyan, Afghanistan, March 26, 2001. The centuries-old Buddha statues were destroyed by the Taliban after an order by their supreme commander Mullah Mohammad Omar. (AP Photo/Amir Shah)

We have heard much of late of the slash-and-burn frenzies of the Muslim hordes pillaging and slaughtering their way through parts of Africa and the Middle East. It is not only Christians, lapsed communicants, perceived heretics and foreigners who are the victims of their confessional ferocity and predatory aims, but the architecture and muniments of civilization itself. The threat which Islam poses to the life of the West should be obvious to anyone who is not complicit, gullible or mentally defective. To fully understand the menace, we must recognize that the Islamic attack is multi-pronged, taking place on a number of levels or fronts all working in concert, and gaining traction with every passing day.

Terror is the preferred means of those we call “extremists,” “radicals,” or (the new favorite) “gunmen,” whether “lone wolves” (who often seem to roam in packs) or established, heavily armed organizations the media like to refer to as “militants.” The warrant for their habitual violence is rooted squarely in the Koran and the Hadith, not in poverty or unemployment despite assurances from their sympathizers and appeasers. As the Rand Corporation report on counterterrorism, cited by Raymond Ibrahim in a penetrating article for PJ Media, makes clear:

Terrorists are not particularly impoverished, uneducated, or afflicted by mental disease. Demographically, their most important characteristic is normalcy (within their environment). Terrorist leaders actually tend to come from relatively privileged backgrounds.

Jihad, Ibrahim points out, “is integral to Islam, doctrinally and historically,” located prominently within the founding scriptures and ancillary texts.

More potent in the long run than the tactic of terror is the strategy of massive immigration, enabling the metastasizing growth of Muslim populations in the progressively febrile democracies of the West. Once Islam in any of myriad forms is allowed into the body social, and in light of the agenda articulated in the Muslim Brotherhood’s “An Explanatory Memorandum on the General Strategic Goal for the Group in North America,” a zymotic future is foreordained as societies begin to unravel and countries to lose their national character. Ten percent of the census is the tipping point. Scholars like Peter Hammond and the aforementioned Raymond Ibrahim have canvassed approximately 50 countries on four continents and done the math, and the results are indisputable.

The consequences of this covert invasion are glaringly evident in many European nations where Islamic no-go zones have proliferated, Sharia law has been incrementally introduced, thoroughfares have become prayer venues, welfare rolls have been depleted, jihadist recruitment has escalated, rape has acquired the magnitude of an epidemic (the true “rape culture”), and Muslim voting blocs determine the outcome of elections, as conniving politicians are well aware. Such are the conditions that Western compromisers, accommodationists and tolerists, priding themselves on their putatively enlightened ideas, are ensuring for their progeny, if not for themselves.

Additionally, the Iranian march toward nuclear status is part of the Shi’ite plan for world domination, which in the Twelver version of the faith requires a universal conflagration and bloodletting to hasten or welcome the arrival of the Twelfth Imam, aka the Hidden Mahdi. The Middle East is already heating up to a higher temperature than we have seen before, civil wars erupting everywhere, nations falling apart, Israel bracing for nuclear annihilation, Saudi Arabia signing a nuclear development pact with South Korea — as the administration of Barack Obama continues to stoke the flames. Indeed, U.S. National Intelligence has just dropped Iran, the world’s most tentacular terror state, and Hezbollah, its largest and most lethal terror proxy, from its list of terrorism threats. 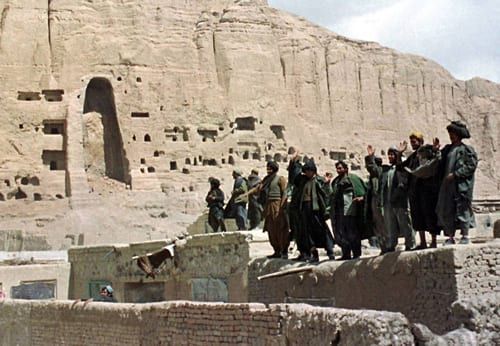 Taliban soldiers stand in front of empty shell where a Buddha statue stood, while waving to journalists, March 26, 2001 in Bamiyan, Afghanistan. Taliban officials showed off their destruction of two ancient statues on Monday by taking foreigners to the Bamiyan mountainside where the relics were blasted apart. (AP Photo/Amir Shah)

As we have been warned repeatedly by the most astute observers and critics among us — Robert Spencer, Steven Emerson, Andrew Bostom, Bruce Bawer, Raymond Ibrahim, Emmanuel Sivan, Serge Trifkovic, Geert Wilders, Peter Hammond, David Horowitz and others — we are under siege by the armies of a supremacist faith operating through terror (the latest such atrocity occurred on March 18 in the Bardo museum in Tunis where twenty European tourists were killed), unfettered immigration and nuclear capability. To this triple array of hostile forces, we must add a fourth front opened (or re-opened) by the warriors of Muhammad — the offensive against the past.

The Taliban demolition of the 1,700-year old Bamiyan Buddhas in 2001 should have sounded the alarm loud and clear. The systematic destruction of Hebrew/Israeli artifacts attesting to the millennial sojourn of the Jewish people in the Holy Land, a project carried out by the Islamic waqf in control of the Temple Mount, is an undeniable attempt to erase the signs and proofs of the historical presence of an entire nation in what was always its natal homeland. And today we see Islamic militias rampaging through the Middle East demolishing synagogues, churches, temples, palaces, statues, biblical tombs, historical monuments, remnant cities like Hatra and Nimrud, and inestimable cultural treasures anchoring antiquity to the living present.

What we are witnessing here, working in tandem, as noted, with terror, social infiltration and the imminent nuclear and ballistic capability of a deranged and religiously dedicated rogue regime, is the deliberate and ongoing effacement of the historical, cultural and architectural record of Judeo-Christian civilization and its ancient precursors. The attack on ancient artifacts amounts to a surgical operation on the cultural psyche of the occident, a kind of chronosectomy, or removal of the temporal organ, leading ultimately to the gradual elimination of communal memory.

According to Daniel Pipes, the motive for this orgy of destruction is to “confirm the superior power of Muslims and, by implication, the truth of Islam.” There is something to this, of course — a platitude need not be untrue. One will also agree with Robert Spencer’s unexceptionable thesis that for the Muslim sensibility, the relics and shrines of “pre-Islamic civilizations, and non-Islamic civilizations, are all jahiliyya — the society of unbelievers, which is worthless,” as stipulated in the Koran (3:137). But the real quarry is the historical logbook of the West and the material ledger of its antecedents. And the goal is their extirpation.

This initiative against the collective memory of the West, tantamount to the razing of a world-historical library, is nothing less than an auto-da-fé of astronomical significance. As London mayor Boris Johnson writes regarding the “moronic demolition of the past” and the unmaking of our “common story,” “I simply cannot understand the sickening silence and complacency with which we are absorbing news of this tragedy.” But it is not entirely unexpected. For the barbaric iconoclasts of Islam have profited greatly from a tribe of elite Western academics. Looked at from the perspective of a mordant irony, it is as if these Islamic marauders constitute the activist arm of the Western university and its curricular reduction of the magisterial pageant of Western history in favor of a postmodern pastiche of marginal cultures, dubious movements and anti-Western polemics. The ground of desecration has been well prepared by a legion of witting and unwitting collaborators. This malignant tillage is now being pursued to its desired harvest by a host of beneficiary savages.

The four-front assault is what the West is currently up against, but it remains plainly incapable of understanding or resisting the combined onslaught upon its cultural integrity, social consensus, political cohesion, and — Islam’s renewed foray against the mind of the West — the retention of the traditional armature of its past, that is, the glue of retrocognition. A person without memory is a hollow shell, living from moment to moment, unable to plan for the future or survive without help. A civilization that loses its heritage, whose evolutionary development is wiped out, and that no longer knows where it has come from or the identity of its parentage enjoys an aimless and frivolous existence until it eventually collapses and disappears. It survives paradoxically only in the triumphant if sketchy memory of the civilization that has replaced it. The eclipse of memory, the decoupling of the archive from the present, is nothing short of death by other means. When, owing to the eradication of memory, time no longer functions as a sustaining medium, the will to persist is paralyzed and life becomes meaningless. The murder of the past is a particularly effective form of cultural homicide.

“It makes me weep with fury even to think of it,” says Johnson. So should we all. Weeping, however, will get us nowhere. “We cannot allow these people to smash our history,” Johnson concludes. “They must be defeated.” He is right — presuming, of course, that we still remember how to fight.