When I called the real-estate lady in Wasilla and explained what I needed, she breathed a deep sigh.

“I wish I could help you out, honey,” she said in a folksy, down-home voice.  “I understand what you want to do, and I must say I’d love to see you do a tell-all takedown about that horrible woman’s day-to-day life.  After all, she gave my brother-in-law herpes and poisoned my dog.  I’d love to see her get what she deserves!  But I’m afraid there’s absolutely nothing available.”

“Surely there must be something,” I said.  “This is for an important cause.  You know, the truth and stuff.”

“Believe me, I’m totally with you,” she replied, “and I wish I could help you out.  Let’s face it, this is the woman who had all the books from our library taken down off the shelves, piled in a dumpster, and thrown in the ocean, and then had them replaced with old copies of People and Glamour and Field and Stream.  This is the woman who used to take baby birds out of the nest outside her kitchen window, wrap them in duct tape, then crush them under the heels of her Manolo Blahniks while cackling gleefully.  This is the woman who used to hang out behind the Gulf station downtown on Sunday mornings after church in a plum-colored latex body stocking and provide satisfaction, shall we say, to any truck driver who stopped to take a whizz on his way from Anchorage to Fairbanks.  Or vice-versa.  Not to put too fine a point on it, son, but she’s the devil incarnate and needs to be exposed — for the good of the world, the good of America, and the good of this poor, long-suffering little town!  But I’m afraid there’s not a single empty unit remotely close to her house.”

I looked at the Google Maps image on my computer screen.  “What about that little house next door to her?”

“Sorry, there’s a guy living there who’s doing a piece for the New York Times Magazine.  Nice fella, though he was pretty upset when he found out that there weren’t any French restaurants in town, and for a couple of weeks there he had trouble wrapping his mind around the idea of drinking tap water.  But he cheered up a mite when I told him all about how she used to hire black men to work in her yard, then pay them extra to let her take them into her garage and beat them with a stick while screaming racial epithets.”

“What about that big house on the other side, a bit farther away?”

“Nope, can’t help you there either.  There’s a lady from the Nation been there for months now.  I must say she’s kind of rubbing the neighborhood the wrong way — her limo’s so long it sticks out of the driveway and blocks half the road, and old Mr. Palmer has a frightful time of it every morning trying to steer his big old Buick around it on the way to the Walmart.  But she’s a nice enough gal, apparently.  My nephew, who works at the package store, delivers a case of Taittinger to her place every other day, and he’s told her all about how he used to bring Sarah cocaine and set up three-ways for her with lumberjacks.”

“What about all those houses across the street?” 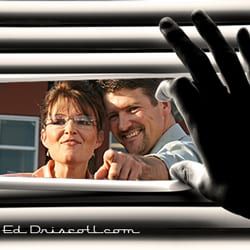 “The one on the end?  Mother Jones,” she said.  “Next door to that?  Harper’s.  And then Le Monde.  And then some fella from Hollywood who says he’s writing a miniseries about her.  And at the other end of the block, this nice German boy who writes for a newspaper which I think is called Der Spiegel.  I’m afraid they all got here ahead of you, darlin’!  In fact, the boy from Der Spiegel came over to our place for dinner last night.  He was especially interested to hear about Sarah’s collection of Nazi memorabilia, which is the most extensive this side of the Mississippi.  You know, of course, that she and Todd used to hold parties where they dressed up as Adolf Hitler and Eva Braun, sang the ‘Horst Wessel Song’ in German — she’s really much better in foreign languages than she lets on — and encouraged their children to laugh it up over films of the death camps?  And that’s just scratching the surface, I’m sorry to say.”

“Oh God,” I said.  “This is amazing stuff!  Everything you’re telling me just confirms that I absolutely have to write about this!  It’s urgent!  I’ve got to get to the bottom of this story!  My career — I mean, the future of the republic — depends on it!”

“Sweetie, believe me, I hear you.  Nobody understands what you’re after better than I do.  We’re talking about a woman who used to go down to the hospital and pull out the plugs of folks on life support — and on the way out, she’d stop at the maternity ward and stick razors in the newborns’ diapers and spray mosquito repellent in their eyes.  Poor little innocents!”

“That reminds me,” I interrupted.  “Is it true that she’s not really Trig’s mother?”

Silence.  The real-estate lady cleared her throat.  Then she said, her tone decidedly cooler: “Come on now, son.  Let’s not be ridiculous.”