Insanity Wrap needs to know: What do you call it when Nancy Pelosi pulls House media credentials from an American news outlet, but lets two Communist Chinese propaganda mouthpieces keep theirs?

Answer: We’d call it a tell, but it’s nothing you needed telling.

“Go away,” they explained:

The Epoch Times’ credentials were revoked by the House of Representatives press gallery, though Philipp said that they are yet to receive anything in writing pointing to specifically why this happened.

Chinese state-run media outlets including Xinhua and People’s Daily, both associated with the Chinese Communist Party and its propaganda, still have their credentials and are allowed to cover Congress.

Let us be generous this one time and give Nancy Pelosi a tiny benefit of the doubt.

Suppose she truly believes that Epoch Times is nothing but a nasty propaganda outlet, and that it therefore should not have the privilege of access to the House press gallery.

Well, Insanity Wrap must ask our purely theoretical version of Nancy Pelosi: If a right-leaning propaganda outfit is unfit to be in your presence, then what makes two Chinese Communist Party mouthpieces fit?

To ask the question is to answer it.

On Friday evening, a New York radio host live-streamed an expletive-filled rant on Facebook, proclaiming “F*** the police.” Hours later, she allegedly drove a vehicle into a police officer, killing him.

The police officer, Anastasios Tsakos, a father of two, was directing traffic when Jessica Beauvais struck him before speeding off in the ghastly hit-and-run. She was later arrested and police found that her blood-alcohol level was almost twice the legal limit.

Beauvais and many other wokesters just like her, believe they are your moral betters and entitled to murderous behavior.

Insanity Wrap probably doesn’t need to actually make a Second Amendment reference, so let’s just pretend that we did.

Today’s craziest person is anyone who still doesn’t understand that wokeism’s victimhood cult makes this kind of thing inevitable:

“The assignment that included a YouTube poem with inappropriate language and material has been removed from the teachers learning management system content,” Engels added. “Parents and/or guardians of students enrolled in the impacted course have been contacted.“

She also told the Washington Examiner that the seventh grade language arts teacher has been placed on leave.

The students were told to read and analyze the poem White Hollywood by Joe Limer.

Insanity Wrap watched the clip of Limer reciting his poem so that you wouldn’t have to. We’re here to tell you it reminded us of one of our favorite ad-libs in movie history.

In the excellent Clint Eastwood thriller, In the Line of Fire, would-be presidential assassin Mitch Leary (John Malkovich) recounts that JFK’s favorite poem was I have a rendez-vous with death. “That’s not a good poem,” Malkovich ad-libbed.

In any case, Insanity Wrap isn’t here to defend Hollywood.

If you want to see America’s bastions of racism, sexism, and outright abuse, stay far away from flyover country and head straight to our nation’s cultural and political capitals — all dominated by leftists.

What Were We Just Saying?

CNN might just have a problem with “workplace culture, not the behavior of an individual, according to two of the sources.”

A female staffer informed Perlberg that female employees at CNN Business struggle to earn promotions or TV spots due to a “lack of transparency” in the process, adding that she felt that the company wanted “to keep as many people as possible at a low pay grade or stay in a certain box and that has led to women not being supported.”

Remember this, the next time CNN tries to tell you how toxic the decent parts of America are.

This is hilarious. The needle, not the vaccine, is what's really important, says television news hero. https://t.co/tmr3gFyDYR

Insanity Wrap is forced to concede that is in fact a take.

It is the lamest attempt at a pro-Dem/anti-GOP take that we’ve seen in 40 years of watching politics, but yes, it is a take.

Is the former UN ambassador and South Carolina governor of east Indian descent trying to con you into believing that minorities in this systemically racist country are allowed to open bank accounts, drive cars, or buy alcohol?

Because clearly, none of that happens, and requiring photo ID to vote is the most racist thing ever.

Weighing the environmental impacts of pets, one expert suggested reducing the rate of dog and cat ownership in favor of other animals.

In The Highlight, find other measures dog- and cat-lovers can take to reduce their pets' carbon footprint: https://t.co/RQEenJV8VM

They are loved and spoiled and cherished and if anyone tries to make us reduce their carbon footprint (!!!), there’s going to be some violence.

We hope that clears up any misunderstanding on the part of the vole-lovers (or whatever) who inhabit the offices of Vox. 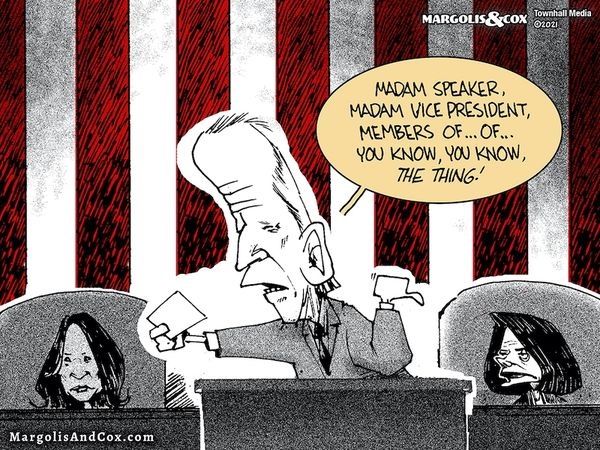 Steve launched VodkaPundit on a well-planned whim in 2002, and has been with PJ Media since its launch in 2005. He served as one of the hosts of PJTV, a pioneer in internet broadcasting. He also cohosts "Right Angle" with Bill Whittle and Scott Ott at BillWhittle.com. He lives with his wife and sons in the wooded hills of Monument, Colorado, where he enjoys the occasional adult beverage.
Read more by Stephen Green
Tags: NANCY PELOSI INSANITY WRAP COVID VACCINE
SHOW COMMENTS