Insanity Wrap needs to know: When you have to find racism in soap dispensers, have you ever found any serious racism anywhere?

Answer: No. Next question?

Canadian economics professor Douglas W. Allen has just published an in-depth, lengthy, and scholarly paper with all the references our Follow the Science™ friends could ever hope for.

There’s just one problem. As Allen puts it, “In my forty years as an academic, I’ve never seen anything like the response and reaction to Covid-19.”

From the Introduction section of his paper:

The ubiquitous media, public health, and political response to the pandemic has been one-sided, incomplete, and almost unchanging over the past year. With respect to lockdown policies, many political jurisdictions have repeated the same spring 2020 programs in 2021, ignoring what has been learned in the meantime. Often public announcements were made that were inconsistent with basic Covid-19 facts that were easy to look up if you know where to look. Furthermore, when research results contrary to the official government response were shared on social media, they were often pulled from social media platforms. As a result, for average Canadians the public media and official public health news conferences have been the only source of Covid-19 information.

The infotainment industry in this country is just as bad, as you well know.

The states that are doing best economically without doing any worse medically — states like Texas, Florida, South Dakota — are the ones whose governors have done the best job ignoring their “betters” in Washington and the infotainment industry.

The thing about science is that it’s nothing more than a rigorous process designed to reduce human error while investigating the nature of things.

When the facts don’t fit the theory, the theory must yield. Anything else isn’t science

Our panicked political COVID-19 response has barely followed any science, all claims and cheerleading by the infotainment industry aside.

The targeted arrests of Portland #antifa members Jacob A. Camello & Crystal M. Miranda for violent felony crimes came because of tips from an informant. This is the second time that informant information led to charges, leading to panic in antifa ranks. https://t.co/ePfEvc2CEy

After most of a year spent despairing over Portland Mayor Ted Wheeler’s tacit (and sometimes explicit) endorsement of partly violent rioting by Antifa thugs, it warms Insanity Wrap’s twisted little heart to see him moving so effectively against the twerps destroying the city.

The reason leftism is so politically successful, no matter how dire (and predictably dire) its results, is quite simple, really.

They just keep hammering away at the same stupid idea until something gives — and they hammer away at nearly everything, everywhere, all the time.

Since leftism has no limiting principles, there’s always something in need of further hammering.

According to a recent online debate on “systemic racism” put on by the Bruin Republicans that I attended, soap dispensers are proof that white people are systemically racist against black people, according to some of my peers.

But it’s not just any dispensers, mind you. It’s those high-tech automatic ones. The reason is simple. As one UCLA student claimed during the debate, automatic soap dispensers “don’t see her hands” due to the dark pigment of her skin. As another student reiterated, soap dispensers are racist because they force “black and brown bodies” to show their palms — “the only light areas of the skin” — in order to get soap out.

Insanity Wrap puts our hands palm-side-up, too… BECAUSE THAT’S WHERE THE SOAP GOES, YOU MAL-EDUCATED, OVERGROWN TODDLER CRYBULLIES.

Ahem. Sorry. We lost our temper there for a moment. We promise not to let that happen again until the next time.

Previously On Insanity Wrap: Greta Thunberg Is a Cautionary Tale, Not a Parenting Guide

If you ask whether there is evidence supporting @DrIbram's decree that the surge of anti-Asian violence is driven by the ideology of white supremacy — as opposed to other social, economic and cultural factors — you may trend on Twitter for 2 days as a racist. Just FYI. https://t.co/q9rYA8qQeq

Glenn Greenwald (along with Matt Taibbi, Tulsi Gabbard, and a very few others) is Insanity Wrap’s kind of lefty.

We might disagree — strongly — on a nearly infinite number of policy issues, but unlike most high-ranking members of the postmodern, woke, progressive Left, Greenwald isn’t in the business of destroying the country.

Greenwald et al. understand that you can’t keep a country by destroying its institutions.

They remind Insanity Wrap in this small way of the relationship between Ronald Reagan and Tip O’Neil. They had fundamental disagreements about taxes, spending, and the regulatory state, but they were both looking in their own ways* at how to make the country better.

*Reagan was right in almost every way while O’Neil was five-nines wrong. Just in case that wasn’t already clear, gentle reader.

Software Firm Rejects Woke Workplace, Saying ‘We Are Not A Social Impact Company’

Here’s a welcome breath of fresh air, like walking into an over-airconditioned home on the hottest summer day:

Basecamp, a firm known for cultivating efficient and positive professional environments, made an announcement Monday that was more notable for the fact that, in 2021, it needed to be said: The project-management software company declared that it was a company focused on developing project management software, not an entity that should try to shape Americans’ political opinions, engineer its employees’ personal lives, or take positions on unrelated public debates.

A business in the business of running their business without poking into everybody else’s private business?

Can they do that?

Masks. Outdoors. On kids. While performing demanding feats of athleticism.

That young lady could have been seriously hurt trying to live up to the insane demands of the COVID panic-monger brigades — and Insanity Wrap hopes that you long ago gave up caring what Karen thinks. 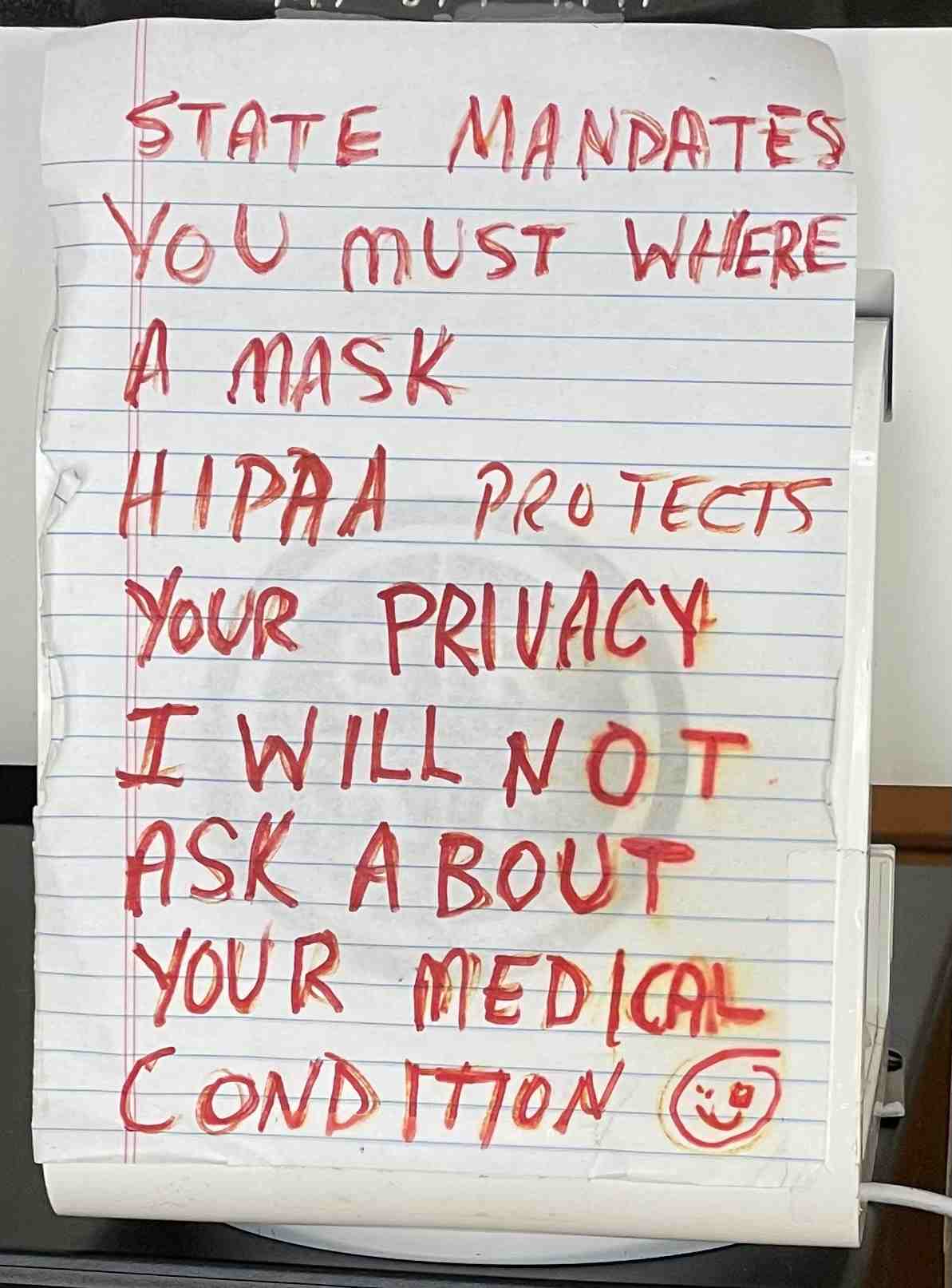 Insanity Wrap stumbled across this sign in front of the cash register at a local business on Monday, and we just had to share.

The winking smiley face more than makes up for any mistakes, don’t you agree?

Steve launched VodkaPundit on a well-planned whim in 2002, and has been with PJ Media since its launch in 2005. He served as one of the hosts of PJTV, a pioneer in internet broadcasting. He also cohosts "Right Angle" with Bill Whittle and Scott Ott at BillWhittle.com. He lives with his wife and sons in the wooded hills of Monument, Colorado, where he enjoys the occasional adult beverage.
Read more by Stephen Green
Tags: RACISM WOKE INSANITY WRAP