Insanity Wrap needs to know: Are delusions of grandeur an essential ingredient before considering a presidential bid after repeatedly angering your own party’s most vocal, loyal, and numerous supporters?

Answer: No, but they don’t hurt.

Insanity Wrap is thinking back to that time we had Dr. Hannibal Lecter plan a dinner party for us, and then our neighbors started disappearing.

We had thought upon reading the headline that we’d seen everything: President Porchlight put Granny Killer Cuomo in charge of his COVID-19 effort with America’s governors.

But as it turns out, the presidentish didn’t even do that much — at least not on purpose.

Embattled New York Governor Andrew Cuomo (D) has reportedly taken over the leadership of the weekly White House conference calls with the nation’s governors about the coronavirus pandemic, since President Joe Biden does not join them.

Wegmann reported that Gov. Cuomo is now leading the weekly conference calls between the governors and the Biden administration’s coronavirus team, due to his role as head of the National Governors Association.

In other words, the man whose bungled response to COVID-19 ruined his state’s economy and public education and got thousands of old people needlessly dead, is running the White House effort by default.

Not because Granny Killer Cuomo is the best man for the job, but because Biden can’t be bothered to show up to his own meetings and Cuomo is for some reason still head of the NGA.

Insanity Wrap already made a second Bloody Mary this morning, thank you very much.

Hey @journalsentinel, why did you crop Ashton Howard’s photo in this way in your report about his alleged violent rioting in Kenosha? #BLM pic.twitter.com/98s3rF8WPl

To ask the question is to answer it.

Years and years ago when David Letterman was still on NBC (and still funny), he had a recurring sketch called “Dave’s Hallmark Shop.”

Not really a sketch, but more of a fake Hallmark store set up on stage, and Letterman would show you some of his cards and posters.

The only one Insanity Wrap still remembers was one of those cute “Hang In There, Baby!” motivational kitten posters. Only instead of an adorable kitten dangling from a tree branch, there was an old, fat cat sitting in a rocking chair.

The caption read: “I haven’t felt like doing much since they got me neutered. I wish I were dead.”

After having watched that video, Insanity Wrap finally understands exactly how that cat felt.

Cops are trolling LeBron on TikTok and I am 100% here for it https://t.co/zpY6ANOQHK pic.twitter.com/KluOzUjvkb

Please allow this video to serve as an Official Insanity Wrap Apology™ for having made you watch that last video.

Previously On Insanity Wrap: The Panicked State of Our Terrible, Communist-Influenced Media

Less Than Zero isn’t just one of the best ’80s movies about affluent Hollywood teenage angst, it’s also the exact amount of concern Insanity Wrap can muster for Congresscritter Liz Cheney’s (R-Wyo.) hint about maybe running for president in 2024.

Dubbed “Lincoln Project Liz” by Donald Trump Jr., the scion of a double-Bushie holdover doubled down to the Post on her “insurrection” accusation about the January 6 Capitol Building riot.

“I think we have a huge number of interesting candidates,” she told the Post, “but I think that we’re going to be in a good position to be able to take the White House. I do think that some of our candidates who led the charge, particularly the senators who led the unconstitutional charge, not to certify the election, you know, in my view that’s disqualifying.”

It was constitutional and has been used semi-regularly by Democrats to try and taint incoming Republican presidents.

So, apart from getting the facts and analysis wrong and weakening her party’s chances in 2024, Cheney is right on the money.

After all that, Cheney has a pony’s chance in an industrial turbine of winning the GOP nod.

It is without guile or snark that Insanity Wrap asks you: Who the hell is ruling in a Liz Cheney presidential run?

Today we announced that Epicurious is cutting out beef. It won’t appear in new Epi recipes, articles, newsletters, or on social. This isn’t a vendetta against cows or people who eat them. It’s a shift about sustainability; not anti-beef but pro-planet. https://t.co/yQ8PrtChtE

Insanity Wrap has gotten many fine recipes from Epicurius over the years, but since they’ve decided to shrink their audience to a small fraction of the world’s population just to generate chatter about their smug and very public sense of superiority, we suppose we’ll have to support them in their self-cancelation.

On second thought, maybe Epicurious was already in financial trouble, and this was their way of cementing down a much smaller but much more rabid leadership.

And they were outstanding.

At Stanford? Can he do that?

A Stanford University professor of medicine has broken ranks with the liberal media by praising Florida Governor Ron DeSantis for his response to the coronavirus pandemic, which was handled more poorly by his Democratic counterparts in states like New York and California.

Dr. Jay Bhattacharya described DeSantis as “extraordinary” in comments on an April 17 interview on the Tom Woods Show, a libertarian podcast. Speaking of the Republican, Bhattacharya said “I mean, I’ve never met a politician like him. He’s extraordinary,” adding that he had a “remarkable” conversation with DeSantis when they spoke about COVID-19 last fall.

The professor stated that DeSantis was well educated on the subject and “knew all of the details” as he had read numerous papers on the disease.

It is Insanity Wrap’s fondest wish that Dr. Bhattacharya finds some comfort and solace about getting canceled for being so right. 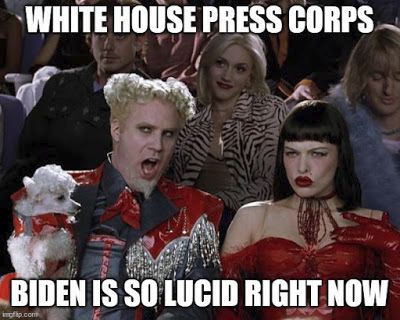 Insanity Wrap will return in our VodkaPundit guise on Wednesday evening right here at PJ Media for a much-requested drunkblog of Presidentish Biden’s much-delayed State of the Union address.

We hope you’ll join us.

Steve launched VodkaPundit on a well-planned whim in 2002, and has been with PJ Media since its launch in 2005. He served as one of the hosts of PJTV, a pioneer in internet broadcasting. He also cohosts "Right Angle" with Bill Whittle and Scott Ott at BillWhittle.com. He lives with his wife and sons in the wooded hills of Monument, Colorado, where he enjoys the occasional adult beverage.
Read more by Stephen Green
Tags: ANDREW CUOMO COVID-19 INSANITY WRAP LINCOLN PROJECT