Remember Curling Up With Your Kids to Read Dr. Seuss' 'One Fish, Two Fish, Black Fish, Jew Fish'? No? Me Neither.

Remember curling up with your kids at tuck-in time to read them a Dr. Seuss classic like One Fish, Two Fish, Black Fish, Jew Fish or that timeless classic, Did I Ever Tell You How Lucky You Are to Be Born White?

Since January 6th, the American progressive left has really cranked the heat up under their long-simmering goal of force-feeding us so much white guilt that we explode like Mr. Creosote in Monty Python’s Meaning of Life.

Everything is racist, we’re told. America was founded on and continues to run on systemic racism, it’s claimed. Domestic terrorists — read: white conservatives — are the greatest threat this country faces, says no less than Joe Biden.

It’s gotten so bad that the “anti-racist” cancel culture has come out swinging against Dr. Suess.

The man who wrote charming children’s books about multicolored fish, a well-meaning elephant, a mischievous cat, and a tongue-tied fox has been secretly selling a generation of children on “orientalism, anti-blackness, and white supremacy.”

PJ Media’s own Jeff Reynolds has a column coming up with the full details on Loudon’s ludicrous lunacy, but I’d like to take a couple of minutes to discuss the bigger picture about how the Left always eats its own.

Or as Glenn Reynolds has quipped on more than one occasion, “the Girondists always fall to the Montagnards in the end.”

It is true that Theodor Geisel — aka, Dr. Suess — drew some racially-tinged propaganda posters during World War II. The example below is particularly galling, implying as it does that patriotic Japanese-Americans were some kind of Fifth Column for Imperial Japan. 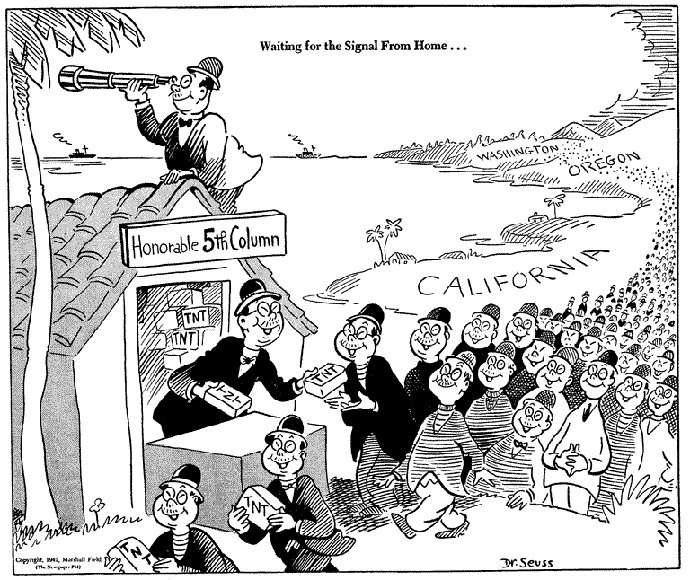 Then again, total war oftentimes leads to panicked decision-making, and FDR’s internment of thousands of Japanese-Americans citizens ranks low on the list of WWII’s countless horrors.

As my friend and PJ Media colleague Charles Martin noted in our Slack channel, “Geisel wrote probably a half-dozen books that were such obvious indictments of bigotry” that he at first couldn’t believe that Loudon County School District’s proclamation wasn’t satire.

Whether it’s in civil rights protections, hiring in corporate America, professional sports, popular culture, and even in our day-to-day lives, we’ve made great progress.

Much more so than anywhere else on Earth you might look, in my estimation — and none other than Theodor Geisel played a part in that.

One of my favorite Dr. Seuss stories to read my sons back in the day was Seuss’s 1961 classic, The Sneetches and Other Stories.

In that one, there were two kinds of adorable Sneetches: Those who had stars upon their bellies and those who “had none upon thars.” The Plain-Bellied Sneetches are looked down on by the Star-Bellied Sneetches, until Sylvester McMonkey McBean shows up with his Star-On Machine to make all Sneetches look alike.

Hilarity ensues as the Star-Bellied Sneetches want their stars removed, now that they no longer look superior to the Plain-Bellied Sneetches. Shortly, everything is so mixed up that no one can tell who’s supposed to be looking down on whom.

In my memory, there hasn’t been such an obvious — maybe even hamfisted — rejection of racism since the “Let That Be Your Last Battlefield” episode of the original Star Trek. But both Sneetches and Trek were products of the well-meaning portion of the ’60s — although it’s easier to forgive a children’s book for being so obvious than it is to forgive a semi-serious bit of science fiction for grownups.

So there’s a great irony here: The Left, hyper-sensitized to anything older than, say, the last anti-American screed they read, finds itself forced to try and cancel explicitly inclusive culture like Dr. Seuss and Star Trek.

But is this a surprise, given that our postmodern leftists are now attacking the Great Emancipator himself, Abraham Lincoln, for being a white supremacist?

I’m much more interested in the popular culture angle since, as the late, great Andrew Breitbart never tired of reminding us, “politics is downstream from the culture.”

Up until recently, Star Trek was considered a touchstone for inclusive entertainment. When it hit the airwaves in 1966, Trek featured a black, female officer (Lt. Uhura), working on the bridge of the USS Enterprise, and holding her own against every male officer.

Even the males who weren’t human, or fully human.

And yet Star Trek is now seen as problematical by many on the left, chiefly because of Captain James T. Kirk’s Bond-like tendency to go to bed with anything in a miniskirt.

Nearly half a century has passed since Star Trek premiered on NBC in 1966, and in that time the series has earned a reputation for presenting an optimistic and inclusive vision of the future, which pushed the envelope when it came to television norms. While this view has merit, Star Trek was also a product of the time it was made  the mid-to-late 1960s  and to contemporary viewers, the casual sexism of the series may come as a surprise.

It’s only a surprise to those who didn’t have to learn history in school, which lately seems to be nearly everyone. Even recent history could have provided a guide to the Left: Recent attempts to make Woke versions of Star Trek and Star Wars led to the worst Trek series of all time (Discovery) and may have killed Star Wars as a movie franchise (the “Force is female” sequel trilogy).

In the second season, showrunner Gene Roddenberry even stuck a Russian navigator on the bridge, just as our real-world Space Race was in full swing.

These were radical moves for their time, but in Roddenberry’s imagination, by the 23rd Century, we’d have put the Cold War, sexism, racism, and even speciesism behind us.

Clearly, the imperfect science fiction visionary lacked the imagination to see that the heirs to his own dreams would come to cancel his legacy — and their own.

Steve launched VodkaPundit on a well-planned whim in 2002, and has been with PJ Media since its launch in 2005. He served as one of the hosts of PJTV, a pioneer in internet broadcasting. He also cohosts "Right Angle" with Bill Whittle and Scott Ott at BillWhittle.com. He lives with his wife and sons in the wooded hills of Monument, Colorado, where he enjoys the occasional adult beverage.
Read more by Stephen Green
Tags: RACISM VIP