Insanity Wrap needs to know: If it’s malpractice to treat the symptom instead of the disease, what’s it called when you mistreat something that isn’t even a symptom? 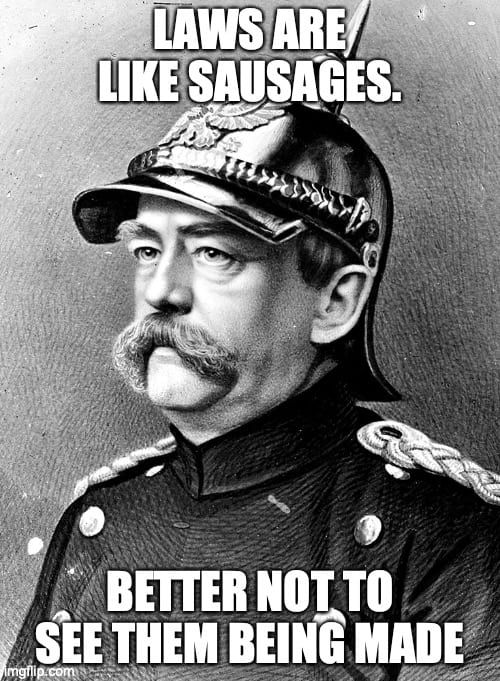 Insanity Wrap finds it somewhat ironic that Otto von Bismarck compared lawmaking with sausagemaking when he probably wasn’t even aware of the American tradition of stuffing the law full of more pork than a Jimmy Deam outlet.

The rest is mostly payouts and credits to favored groups, and of course a huge bump in the minimum wage to $15.

What we really need is lockdown relief, continued deregulations, and no more mucking around with the tax code.

Instead, the Democrats propose a return to Obamanomics.

If you’ve forgotten, Obamanomics consisted of taking an economy that was already on its back, stepping on its throat with a sturdy jackboot of regulation and taxes, while smacking it upside the head with a huge sackful of borrowed money while screaming, “WHY WON’T YOU PRODUCE ANY JOBS?”

It didn’t work then. It won’t work now.

BLM-antifa protesters have shut down the road in Portland for their anti-police march. pic.twitter.com/165FmfDdqj

Once again, Andy Ngo delivers the goods on Antifa.

And an important Insanity Wrap reminder: When organized left-wing militants attack government buildings for months on end, it isn’t an insurrection. When a one-time mob breaks into the Capitol, it is.

Today’s craziest person is the one who doesn’t believe this stuff works.

Soledad O’Brien is the Democrat’s expert on misinformation who will be testifying at the Senate hearing on Wednesday on “Fanning the Flames: Disinformation and Extremism in the Media.” O’Brien has perpetuated and spread misinformation herself over the years.

In 2019, O’Brien perpetuated the Jussie Smollett hoax, in which Smollett claimed to be the victim of a racial attack and was then found to have staged the incident.

She peddled the Russia collusion hoax, slamming Rep. Tulsi Gabbard for saying that there was no collusion. O’Brien said “Girl, this is a lie. And all the Republicans enthusiastically supporting your candidacy should be a clue to people watching.”

Insanity Wrap regrets to inform you that there’s much more at the link.

The reason it works is threefold:

That’s why Democrats can put most anyone, no matter how unhinged or unreliable, in front of a committee hearing and still move their needle their way.

Great work, fear mongers. Screening for breast, cervical and colon cancers was cut by 2/3 since the pandemic. Over a virus that’s about 99% survivable. https://t.co/JQjcMamdeN

We’ll be dealing with the fallout of COVID-19 for a very long time.

Not so much the lingering side effects of the illness, but the long-term damage caused to the economy, to our liberties, and to little things like increased cancer risk thanks to fewer screenings.

Insanity Wrap will be drinking our lunch today.

Your Daily Dose of Nonsense

Insanity Wrap tips our hat to whomever it was at Daily Caller with the patience and fortitude to patch together this supercut.

One would think that the legislators would be focused on better policing and other programs. Rep. Marcus Evans Jr. (D, Chicago) however wants to ban video games like “Grand Theft Auto” which depict “motor vehicle theft with a driver or passenger present.” While it would not likely make a dent in carjackings, it would curtail free speech and individual choice.

Owning a car in Chicago has become increasingly difficult. I have one close relative in Chicago who sold his car because it became simply too expensive to continually replace tires and other items regularly stolen in broad daylight. Cars are stripped on city streets by gangs that drive around harvesting sellable items or just stealing entire cars. The solution for many is to simply not have a car.

Implicitly condoning criminal behavior while restricting politically incorrect entertainment and getting people to give up their cars?

Insanity Wrap is certain that this is what our friends on the progressive left call a triple win.