Insanity Wrap needs to know: Is it time for the New York Times to cancel itself due to its systemic racism?

Midwives have been told to say “chestfeeding” instead of “breastfeeding” and to replace the term “mother” with “mother or birthing parent” as part of moves to be more trans-friendly https://t.co/fgjM81e8YU

Why are we no longer allowed to state medical fact, that transwomen are incapable of bearing, birthing, or nursing children?

Why must we pretend otherwise?

Insanity Wrap will have none of this Newspeak, and neither should you, gentle reader.

NYT, There’s Something About You 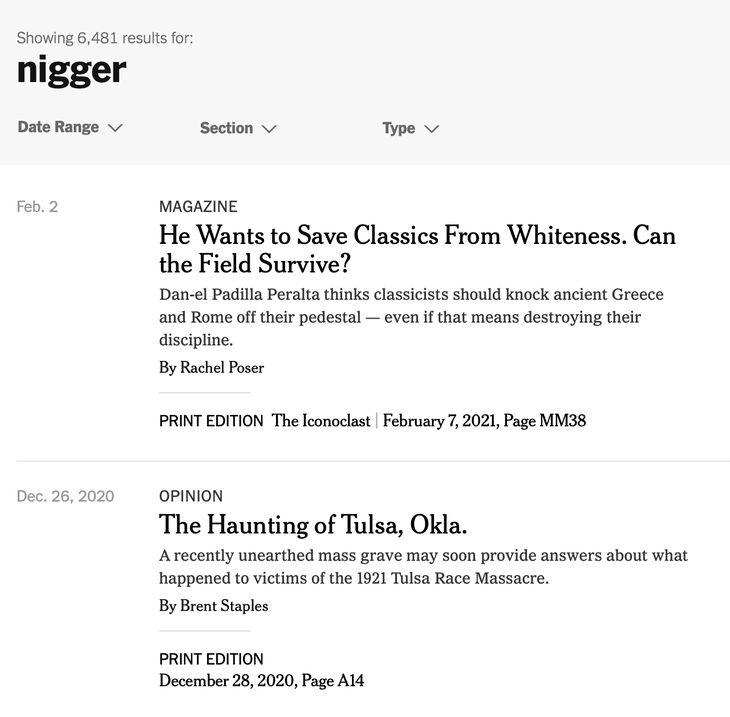 We wish we’d been smart enough to think of doing this ourselves, but the credit goes to Insanity Wrap’s MeWe friend, Hank Ramallo.

After the New York Times Woke Mob got a veteran science reporter fired for a one-time, non-racist use of the n-word, Hank decided to hold the paper to its own standard.

Hank’s search resulted in no fewer than 6,481 results, or slightly fewer than you’ll hear in a typical hip-hop chart-topper.

The most recent story to feature the n-word was from just eight days ago.

Don’t take Insanity Wrap’s word for it. Click here if you’d like to generate the search results on your own.

Wait until the paper’s youthful Brown Shirts discover that their employer is a long-term incubator for systemic racism.

The New York Times ought to cancel itself.

Quite the contrast. Mark Cuban will deal with the PRC – benefit them in business knowing they have Uyghurs concentration camps, use prisoners for medical experiments & cheap labor for US big tech & their attacking Hong Kong's independence, but he won't play the US national anthem https://t.co/YtuROhnxjg

Insanity Wrap spent a little time over today’s first cup of coffee, deciding what we might say about Mark Cuban.

But after coming across this pair of tweets from Robby Starbuck and Tony Shaffer, what is there left to say?

This is delish, a recent-ish neologism Insanity Wrap is certain we’ve never used before.

Sullivan was charged last month with civil disorder, being in a restricted area and disorderly conduct, according to a criminal complaint by the Justice Department (DOJ).

Despite early analysis from the usually excellent Andy Ngo showing no signs of leftwing agitators during the Capitol Riot, like so much early information that comes out in the heat of a crisis, that turned out to be wrong.

So what was the actual ratio of Antifa-type agitators like Sullivan to actual MAGA-types at the Capitol on that deadly January morning?

Insanity Wrap has no way of knowing yet, and neither do you.

Wearing a ballistic vest and gas mask, he allegedly entered the Capitol through a window that had been broken out and pushed past U.S. Capitol Police once inside, according to a complaint.

While inside, he told rioters that “We got to get this s— burned,” and “it’s our house m————,” according to an FBI affidavit.

Insanity Wrap is happy to remind you that the MAGA-types inside the Capitol building did not take Sullivan’s advice to “get this s— burned.”

So we believe it’s more than fair at this late date to conclude that leftist agitators like Sullivan did their best to take a bad situation and make it worse (that’s what leftists do). However, no matter how wrong it was for MAGAs to break into the Capitol — and we hope they’re all brought up on charges — they were clearly not the insurrectionists or nihilists the Democrat-Media Complex would have you believe they were.

If you need to see genuine insurrectionists and nihilists, look no further than the streets of Portland, as you’ll see in Insanity Wrap’s next item.

Overnight in Portland, #antifa shut down the roads of downtown as they marched around for an anti-ICE event. Police did not respond. Approved “press” had to wear markings on their arm. pic.twitter.com/zyEGk9Kvlb

So much wrong here.

The Constitution? Bill of Rights? Due process?

What are those, really, when there are headlines to grab?

U.S. Sen. Marco Rubio, R-Florida, has introduced a bill that could strip individuals merely suspected, not convicted, of domestic terrorism of their Second Amendment rights. In a press release, Rubio says the bill would create a database of individuals who were “the subject of a federal terrorism investigation within the last 10 years.” When anyone on that list tries to buy a firearm, their name would be flagged and the federal government could delay the sale for up to 10 days and file an emergency petition to prevent the sale. The court would only have to find there was probable cause that the individual “is engaged, or has been engaged, in conduct constituting, in preparation of, in aid of, or relating to terrorism, or providing material support or resources therefore” to bar him from buying a firearm.

Insanity Wrap understands that Marco Rubio is something of a favorite amongst more-moderate Republicans, and that he has done some good work.

But too often, when push comes to shove, Rubio reminds us much more of John McCcain than Ronald Reagan.

So the damn thing we’re not going to care about today is what Rubio thinks our Second Amendment rights are. 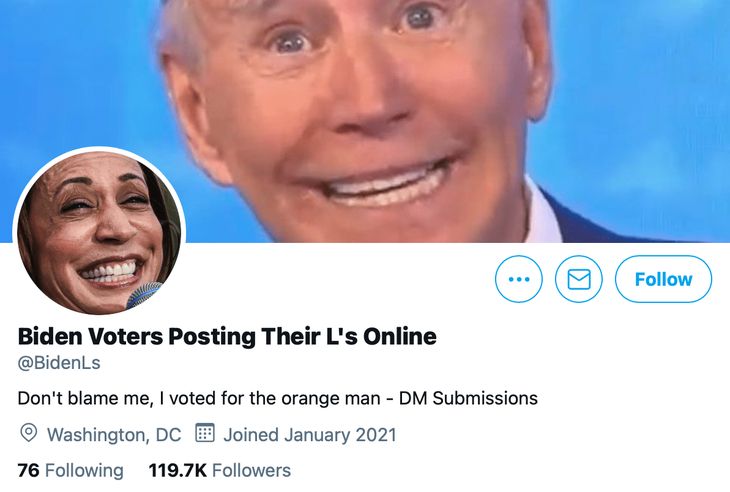 All the Biden Voter Regrets you could ever point and laugh at, all in one handy Twitter profile.

Screencapped for posterity, Insanity Wrap is pleased to note, in case Biden voters ever regret expressing their regret.

There is so much schaden in our freude right now that Insanity Wrap could be rebranded as some of that seriously dark German pr0n that no one should watch ever.

“[W]e’ve seen it in Bosnia, we’ve seen it in Rwanda, where radios was telling people – you know, Hutus were telling the radio listeners that the Tutsi are cockroaches, you know, getting them ginned up for genocide,” Cooper said on his prime-time show Tuesday while Illinois GOP NeverTrump Rep. Adam Kinzinger nodded along. “And you see it in these videos where people who claim they are patriots are in the face of a police officer.”

During a hundred days of tribal warfare, somewhere between 200,000 and 800,000 Rwandans were murdered, often hacked to death with machetes. Maybe as many as half a million women were raped during the ethnic onslaught.

Anderson Cooper cheapens the horrors endured by Rwanda’s Tutsi and Twa peoples, for nothing more than the cheap pleasures of signaling his virtue to his equally ignorant (and rapidly declining) viewership.

Insanity Wrap feels a little sick over this one, so let’s lighten the mood, shall we?

We’re going to be OK, just as soon as we stop allowing the collectivists and statists to keep us at each other’s throats.