Insanity Wrap needs to know: Is it good news that President Joe Biden turns out to be one of those honest politicians who stays bought?

Answer: Not when he’s a majority-owned subsidiary of the Chinese Communist Party, it isn’t.

To Insanity Wrap, it seems like a no-brainer to prevent a Communist front corporation like Huawei from getting its electronic fingers all into our power grid.

Speaking of no brains:

President Biden has revoked a Trump-era executive order that sought to keep foreign countries and companies out of America’s bulk power systems – principally entities associated with the Chinese Communist Party – as part of his “Executive Order on Protecting Public Health and the Environment and Restoring Science to Tackle the Climate Crisis.”

Last month Insanity Wrap advised you to “Pray That Joe Biden Isn’t an Honest Politician Who Stays Bought by the CCP.”

It is actually half lit. The opposite side to the one shown here is dimly lit. White House is dark tonight too.

Just another night in Portland, where partly violent LARPers duke it out with local police…

Insanity Wrap would give them points for creativity, right before sending them to bed without dessert.

Wait a minute…After months of being told it was racist to refer to COVID as a “Chinese virus” the WP refers to its new strains as “British and South African variants.” So you can use the name of the nation where it comes from, so long as that nation is not China. Got it. pic.twitter.com/IlXLNbRPvx

Today’s craziest person in the world is the one who didn’t see this coming.

Insanity Wrap is pleased to tell you that you weren’t losing your mind all last year, thinking that Joe Biden was losing his mind.

Getting What You Voted for, Good and Hard 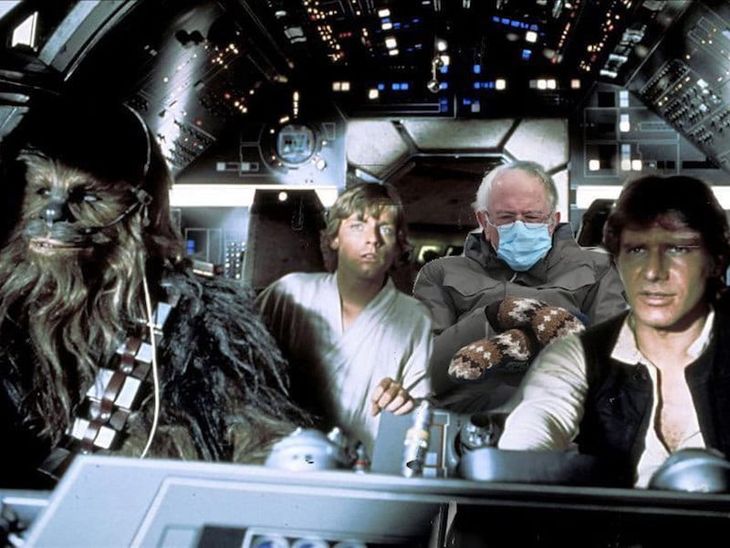 “If only Comrade Stalin knew,” the old GULAG complaint went.

“People have been contacting me thinking that they can get mittens, and actually, they can’t,” Vermont school teacher Jen Ellis said about the mittens that Sanders wore on Inauguration Day, adding that high taxes drove her out of business.

“I don’t have any more, and I don’t have much of a mitten business anymore because it really wasn’t worth it,” she continued. “Independent crafters get really taken for a ride by the federal government. We get taxed to the nth degree, and it wasn’t really worth it pursuing that as a business, even as a side hustle.”

Still, despite Sanders’s strident support for raising taxes, including on the middle class, to pay for “Medicare for all,” Ellis says she supports the senator.

Your sacrifice for the revolution has been duly noted, comrade. Enjoy your gruel.

Greater Than, Lesser Than

The US after Trump has been administering 1.16M doses per day. Biden is saying he will do 100M in 100 days. Why the slow down @JoeBiden ? I would imagine we ramp up even more per day. But idiots will think WOW 100M that’s more. Math is hard for a lib

Once again, it’s up to bloggers and Twitter randos to do the job that “reporters” from the complicit Infotainment Complex won’t.

Prime Minister Justin Trudeau said on Friday that he and all Canadians shared values with President Biden, including in the “fight against climate change as a way of growing the economy.” This coming after the revoking of the Keystone XL Pipeline project by President Biden, costing Canada a potential 60,000 jobs.

In a statement released Wednesday, Trudeau said that he was “disappointed” in Biden’s decision to axe the project, but went on to say that he looked forward to combat climate change and reduce pollution with the new US president.

Insanity Wrap would first like to pass along our condolences to our Canadian friends, trapped all these years with Prime Minister Zoolander.

We’d also like to address Canada’s surprisingly supine PM directly: Pipelines use less energy and generate less carbon and risk than trains or trucks do. And you can’t produce the wealth necessary to fight climate change or whatever without jobs. But we’re sure you knew all this already, you sad little suckup.

Send In the Hostage Rescue Team

The day Joe Biden was sworn in, America had the single highest one-day death total

Democrats killed thousands of small businesses and it was never about the virus.

Plus: “I’m hearing the Governor is going to lift the Stay-At-Home order for Southern California tomorrow. (Allowing outdoor dining, personal services and others to open) Who knows, why did we close them in the first place?”

It’s impossible not to conclude — as many did, months ago — that the shutdowns were about holding the country hostage to a favorable election outcome for the Democrats. Plus, squeezing out small businesses to benefit established players.

Dems held the country hostage for months and got rewarded handsomely for it.

Previously On Insanity Wrap: One Day With Joe Biden and Everything Has Gone to Hell Already