Insanity Wrap needs to know: Is it really possible to unperson a billionaire president of the United States?

Answer: Bill de Blasio is doing his best to find out.

Back in the ’80s when David Letterman was still hosting Late Night on NBC and was (coincidentally?) still funny, he had a recurring sketch comedy bit called “Dave’s Hallmark Shop.”

The gag was that all of the greeting cards and cute “Hang in There, Baby!”-type cat posters were all comically wrong, the exact opposite of what you’d find at a real Hallmark shop.

One poster was of a fat old orange cat half asleep on a rocking chair.

The caption read, “I haven’t felt like doing much since they neutered me. I wish I were dead.”

Anyway, that’s the memory that sprang into Insanity Wrap’s mind when we saw the news about Joe Biden’s inaugural plans.

The Purge picks up speed:

“The president incited a rebellion against the United States government that killed five people and threatened to derail the constitutional transfer of power,” de Blasio said in a statement. “The City of New York will not be associated with those unforgivable acts in any shape, way or form, and we are immediately taking steps to terminate all Trump Organization contracts.”

The three contract are for Central Park public entertainment facilities – the Michael Friedsam Memorial Carousel and the Lasker and Wollman skating rinks.

Insanity Wrap must remind you that the Wollman Rink was the one that then-New York Mayor Ed Koch tried and failed to renovate for years at great public expense. Trump took over the project and at his own expense got the rink operating for the public in just six months. The Trump Organization has operated it since, returning most of the profits to public works.

But we can’t have that anymore because Orange Man Bad.

Actions like de Blasio’s are about establishing in the public mind by fiat what they can’t establish legally — that Trump “incited” an “insurrection.”

Look, the New York City government can do or refuse to do business with anyone they like, for whatever reason they choose, provided they don’t break any existing laws concerning discrimination, unionization, etc.

If the Left can do this to a billionaire-turned-president, it doesn’t take much to imagine what they could do to much smaller fry — which is pretty much literally everyone else.

It was a dark winter for most restaurants owners across America, but LA County, in particular was decimated by draconian lockdown measures right before Thanksgiving. My producer @_sagnikbasu and I spent the holidays documenting several such stories pic.twitter.com/9cwphz7JZW

These people have so much to legitimately protest, yet the worst they do is tell the truth, plaintively, to state and city governments uninterested in hearing them.

Also, there’s more at the link. We humbly suggest you dig through the thread.

Today’s craziest person in the world is anyone who didn’t see The Purge coming.

The stupidest person — Insanity Wrap sometimes stumbles across these trolls in this very comment section — is the one who denies it’s going on.

Dorsey, who recently addressed the controversy over his company’s decision to permanently suspend the president, told staff in a virtual meeting that Twitter will do a “full retro” that will “take some time,” but drew focus to the platform’s former most high-profile account.

“We know we are focused on one account right now, but this is going to be much bigger than just one account, and it’s going to go on for much longer than just this day, this week, and the next few weeks, and go on beyond the inauguration,” Dorsey said. “So, the focus is certainly on this account and how it ties to real-world violence. But also, we need to think much longer-term around how these dynamics play out over time. I don’t believe this is going away anytime soon.”

Nope, this isn’t going away anytime soon but plenty of Twitter accounts will.

The modern public square is firmly in control of Big Tech, and they will determine what is permissible to discuss, debate, and disseminate — and by whom.

It reinforces the message to the Chinese people that nobody in the world enjoys freedom of speech, giving the CCP greater moral authority to crack downhttps://t.co/Bhgv8TjpJr 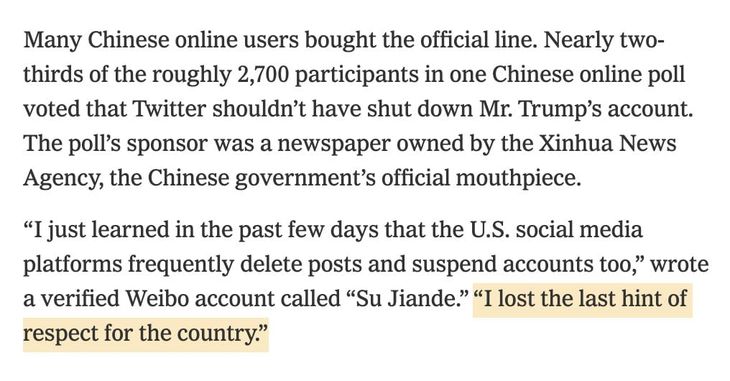 Whatever damage Trump was supposed to have done to our international reputation, it’s the Woke who are actually doing it.

‘Sex And The City’ Getting A Revival

Insanity Wrap can hear your yawns from all the way deep in the bowels of our mountainside bunker.

But there’s a lovely moment of sanity in this story we think you’ll appreciate:

After two movie sequels and a long-hiatus, “Sex and the City” will be getting a revival on HBO Max and will explore the characters navigating middle-aged life. Kim Cattrall will reportedly not be returning.

Insanity Wrap believes it’s safe to say that the lovely Kim Cattrall is the one actress left from that cast with her sanity — and career — intact.

Uber previously featured #BLM Capitol Hill riot suspect John Earle Sullivan in a commercial. He was arrested yesterday & charged with violent entry & disorderly conduct on Capitol grounds & more. Last summer, he was charged over a BLM-antifa riot in Utah where a person was shot. pic.twitter.com/RHd7lehz5K

During the January 6 riot, Insanity Wrap posted on the PJ Media Live Blog that some of the rioters looked less like MAGA types and more like BLM/Antifa types.

Here’s one of them, caught red-handed.

Insanity Wrap hopes this isn’t true, but hope is not a plan.

A basement safe full of ammo, now that’s a plan.

Previously On Insanity Wrap: Did Jack Dorsey Just Repudiate His Decision to Exile Trump from Twitter?