Insanity Wrap needs to know: Why can’t we get more than two lefty journalists with integrity?

Answer: Seriously, are Glenn Greenwald and Matt Taibbi all we’ll ever get?

Is Consistency Even a Thing Anymore?

If we’re going to start deplatforming, impeaching, etc., people for their vote to object to Electoral College votes, maybe we could start with this guy.

Big Tech wants to silence conservatives. Help us fight back by becoming a PJ Media VIP member. Use promo code CENSORSHIP to receive 25% off your VIP membership.

Now do the Portland and Seattle insurrections that attempted to secede from the union, instead of the unofficial catch-and-release treatment they’ve been enjoying from their local district attorneys.

My 14 year old daughter’s description of the movie Dunkirk: “isn’t it just a bunch of white boys waiting for boats?”

What is there to say to a person like this, other than, perhaps, “Why don’t you read a damn history book?”

Insanity Wrap weeps at the maleducation peddled to the American public these last few decades.

Airbnb is banning anyone who took part in the attempted coup

If the inchoate rage we saw in Washington last week was a coup attempt, it was akin to asking a troop of spider monkeys to organize the D-Day landings at Normandy.

Insanity Wrap reads a lot of tech news, mostly because we’re a gadget freak who always has to have the newest and fastest whatever-it-is, but partly because tech news and gadget reviews tend to be apolitical, and everyone in this business needs a daily dose of the apolitical.

But over the last week, our favorite tech sites have run headlines like “Donald Trump has finally earned a permaban from Twitter” or “Why platforms had to cut off Trump and Parler.”

The tech community went from “information wants to be free” to “Big Tech should decide who gets access” so quickly it nearly made Insanity Wrap spill our drink.

Just kidding. First of all, we never spill our drink. Secondly, we’ve been watching the tech sites move in this direction for a long while.

What changed quickly is the increased brazenness of it all.

So now we have Engadget claiming that last week’s lamentable, deadly Capitol Building riot was actually a “coup attempt.”

People will buy it, too, because opposing voices are being squeezed out of electronic existence.

You don’t need Insanity Wrap to tell you just how Orwellian it is, the ability to rewrite the past to suit the needs of the present moment.

I supported Trump. He did a lot of good things. His last two months were the worst of his presidency and he destroyed his legacy (with the help of insane people like Lin Wood and Ali Akbar).

Some of Trump’s failure was actually the fault of the press and Big Tech, who preemptively decided what the truth was, and what subjects could even be publically discussed.

Some blame rests with Trump and his team, however, for failing to put together a coherent strategy. Also, for tolerating and even encouraging nuts like Lin Wood and Sidney Powell.

Granted, Trump had no good choices. He probably didn’t even have any palatable choices. Buy anyone praising his execution of his post-election non-strategy must take stronger drink than even Insanity Wrap does.

The time to concede — gracefully or otherwise — was probably after the Supreme Court wimped out and decided not to hear Trump’s case. It was at that point that Trump’s path to victory had narrowed down to a singularity from which not even light could escape.

Concession — with the promise to fight another day — could have allowed former President Trump to put together a better team, and come back in 2024 with a solid plan for beating the Dems’ turnout and fraud machines.

After this last week, Insanity Wrap no longers sees that as possible.

It’s a sad ending for a president whose solid achievements, particularly in the courts and in the Middle East, will far outlast whatever damage has been done (both fairly and unfairly) to his reputation.

Chicago Teachers Refused To Return To In-Person Teaching. Chicago Now Says They Will Not Be Paid.

Members of the Chicago Teachers Union refused to return to classrooms Monday, even though Chicago Public Schools officially reopened to some in-classroom learning. Now, the city says teachers who called in sick without an excuse will be considered “absent without leave” for each day they refuse to turn up and may not be paid for their time.

Insanity Wrap can hear the Chicago teachers’ lament all the way over here in our Colorado front range compound: “We have to work to get paid? But we have a union!”

How Silicon Valley, in a Show of Monopolistic Force, Destroyed Parlerhttps://t.co/qD9OdwlPbV

Glenn Greenwald is Insanity Wrap’s craziest person in the world (today) for daring — once again — to take on his compatriots on the left.

In the last three months, tech giants have censored political speech and journalism to manipulate U.S. politics — banning reporting on the Bidens, removing the President, destroying a new competitor — while US liberals, with virtual unanimity, have cheered.

The ACLU said the unity of Silicon Valley monopoly power to destroy Parler was deeply troubling. Leaders from Germany, France and Mexico protested. Only US liberals support it, because the dominant strain of US liberalism is not economic socialism but political authoritarianism.

If it weren’t for Greenwald and Matt Taibbi, there would be virtually zero honest reporting from the Left. 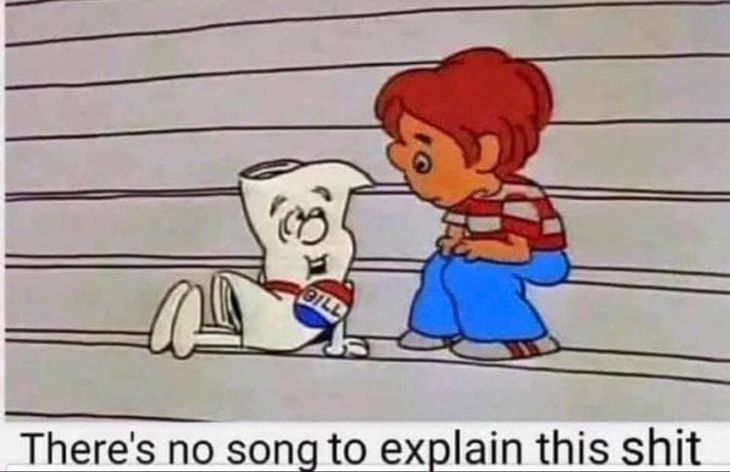 If you’re within five or ten years of Insanity Wrap’s age (we’re closing in on 52), you’ll either laugh or cry or both at today’s meme.

We’re sticking to laughter, but in no small part due to the Bloody Marys.