Answer: Maybe they were hoping to get Brownie points for honesty.

Insanity Wrap believes it’s a shame that it’s come to this because the promise of social media was that it was where any and everyone could come together to share their thoughts, recipes, adorable LOLcats, etc.

Now it’s a place where the right people are allowed to parrot the approved talking points, and the Blue Checkmark Mafia can prove its superiority by punching down at (or even doxxing) the wrong people.

Apparently, Lockie missed that day in school — if they still teach this stuff, that is — when they taught that massive bureaucracy and top-down decision making by “enlightened” “experts” formed the core of the Progressive project over a century ago.

It continues to this day — and with deadly results.

Whatever the case, our enlightened progressives know precisely who should get the vaccine, when and in what order.

If that means delays, wasted vaccines, and even deaths, well… it isn’t your position to argue with your betters, prole. 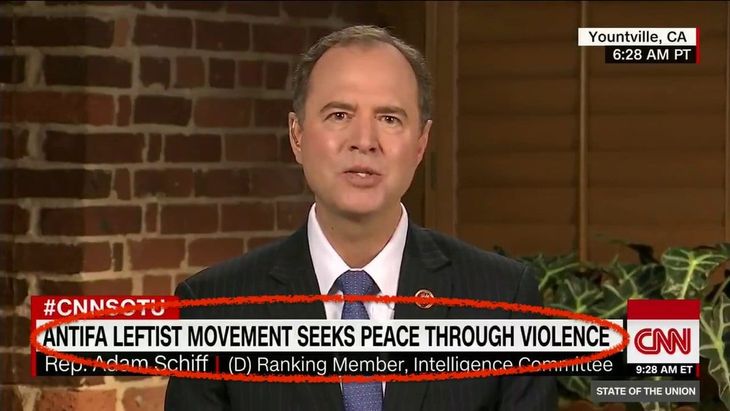 Insanity Wrap has been assured by at least two sources that this is a genuine chyron run by CNN this week.

“Violence is Peace, Freedom is Slavery, Ignorance is Strength,” is very nearly what George Orwell wrote. CNN merely subbed out “war” for “violence.”

(Judging by the result of the recent election, Orwell sure got that last part right.)

On the other hand, Insanity Wrap is forced to admit, if you’re going to go full Orwell, it’s probably correct to do it when Adam Schiff is on.

You either die a lockdown hero or you live long enough to turn into Ron DeSantis https://t.co/di04FdiU99

Today’s craziest person in the world is anyone who didn’t see the Blue State Governor Flip-Flop coming just as soon as the election result was fully decided in favor of Joe Asterisk.

Insanity Wrap readers saw it coming, even if you happened to miss the several times we predicted it, right here on this very page.

What happened is this: Democrat governors held their own states hostage. The ransom they demanded was getting Donald Trump thrown out of office.

It’s reprehensible, but at this point, what are you gonna do?

Escape from New York (If You Want a Timely Vaccination)

Doses thrown out in New York due to Gov. Cuomo’s vaccine rollout policy

What happens when your malignantly stupid governor devises a vaccine distribution policy that incentivizes throwing out perfectly good doses rather than give them to the “wrong” people — to the tune of ONE MILLION DOLLARS per “offense”? The Law of Unintended Consequences has fewer loopholes than the Law of Gravity, and yet mal-informed, ambitious politicians always think they can get around it.

In other words: Insanity Wrap doesn’t have to tell you, gentle reader, because you aren’t malignantly stupid.

Unlike the mal-informed and ambitious politician Fredo the Elder:

Last week, Dr. Neil Calman, president of the Institute for Family Health, told The New York Times that the Family Health Center of Harlem had to throw away doses of the coronavirus vaccine after patients didn’t show up to their appointments. Other institutions relayed similar stories, while other medical professionals spoke of vaccines sitting in freezers for weeks unused.

This was a result of the city’s health department having told clinics that they could only give shots to groups deemed eligible by the state. Cuomo had issued strict guidelines as to which groups could receive the vaccine and in which order. New York City Mayor Bill de Blasio railed against these restrictions, and demanded that the state allow the city to determine who should get the vaccine when in order to maximize efficiency and not waste any vaccines.

The miracle of being even stupider than Mayor Bill de Blasio is that your brain has enough core functions to keep your heart beating and lungs breathing.

(Re-) Introducing the Dumbest Person in the World

.@nhannahjones: The “white labor force” votes “against their own economic interests because it means they are still above … Muslims, Latinos and black Americans” pic.twitter.com/ck1KpzWLp2

Insanity Wrap was going to spend a few minutes explaining the murderous folly known as “false consciousness,” but then we decided that rather than delve back into Marx & Engels on a bright winter morning we’d drink our breakfast instead.

Cancel culture is all in your mind, they told you.

Then they said this:

Barnard’s comment came just days before multiple U.S. companies said they would no longer financially contribute to campaigns of GOP lawmakers who objected to state’s electoral college votes in the 2020 presidential election, despite the fact that both Democrats and Republicans have done so in past elections. American Express, AT&T, BlueCross BlueShield, Commerce Bank, Dow Chemical, Marriott, and Mastercard are just some of the companies withholding donations to Cruz and other lawmakers who objected.

But take away Cruz’s degrees and corporate support, and he’s still smarter, better educated, and more accomplished than Alex Barnard will ever be.

Back when Insanity Wrap was young, foolish, over-indulgent, and just generally carefree and awesome, this is not what anyone meant by “flying your freak flag.”

But once again today we must ask: At this point, what are you gonna do?

Steve launched VodkaPundit on a well-planned whim in 2002, and has been with PJ Media since its launch in 2005. He served as one of the hosts of PJTV, a pioneer in internet broadcasting. He also cohosts "Right Angle" with Bill Whittle and Scott Ott at BillWhittle.com. He lives with his wife and sons in the wooded hills of Monument, Colorado, where he enjoys the occasional adult beverage.
Read more by Stephen Green
Tags: CANCEL CULTURE CNN INSANITY WRAP