The Mask Comes Off: Mask Fatigue Is Driving Americans Crazy

Out picking up dinner in Colorado Springs for the family a few days ago, I was treated to two sights: One depressingly common, the other an almost literal breath of fresh air.

I dutifully put my mask on at the door, which was of course adorned with the state-mandated “Masks Required to Enter” sticker. I walked in and noticed the all-too-common sight of there being too few tables for such a large dining room, and that all the chairs were stacked upside-down on top of them.

While I was making small talk with the manager at the bar, waiting for the food to come out, I noticed something else entirely.

Two of the tables had chairs at them instead of on them. There were people sitting at them, enjoying their forbidden indoor dining, sans mask. That’s when it struck me that there were patrons at the bar, too, and none of them were masked, either.

You couldn’t help but notice that the other patrons were seated at tables and at the side of the bar that can’t be seen from the front door or windows.

The manager kept his mask on, although whether that’s just because it’s the law, or because he felt safer that way wasn’t an issue I got into during our pleasant small talk.

We got along. We made it work. Unlike these people:

Are more people waking up? pic.twitter.com/pbwBck8tPc

It’s a shame she conflated 2019 with 2020 in what was an otherwise impressive impromptu speech.

Like much of the rest of the Front Range, El Paso County (where Colorado Springs is located) went on “Code Red” level lockdown restrictions about five weeks ago. 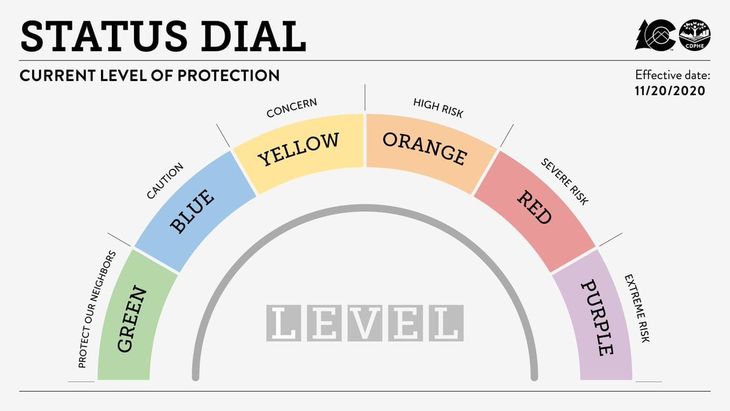 Under Red-level restrictions, everyone but essential workers are supposed to stay home, no personal gatherings are allowed, schooling is hit and miss, indoor dining is banned, and last call (at the closed bars!) is set for 8 p.m.

Sometimes, the restrictions are more comical than they are frustrating — and they’re plenty frustrating.

Denver’s Regional Transportation District (RTD) lost 68 percent of its transit riders last April due to Colorado’s stay-at-home orders. Rather than obey the orders, some of RTD’s staffers visited some of the so-called transit-oriented developments along its rail lines and found — gasp! — 40 to 50 percent of the parking spaces were empty. They concluded that those parking spaces were a waste and should be taken away, perhaps filled with more mid-rise housing.

This is just one more example of the seemingly endless numbers of stories involving our betters in government demanding that we do what they say, not what they do.

There are oodles of other limits and restrictions, most of which are seemingly random or even capricious. Few or none have any basis in science.

Please note two more things. First, that Red, as restrictive as it is, is only the second-strictest “setting” on the tyrannical dial. Also note that Green does not indicate “all clear” or anything like that. My guess is that — just like the color-coded terrorism risk chart — the government will never again code us at anything less than Yellow.

Is it any wonder Americans are going crazy?

That we’re losing patience with one another, that civility is fraying, depression and suicide are way up, and all the rest…

…these things aren’t just because of masks, but masks are the most visible (and to some people, the most risible) example of our Wuhan-inflicted miseries.