Insanity Wrap needs to know: How are we supposed to follow the science when it’s jumping around like a meth-addicted jackrabbit?

Answer: Don’t ask questions and believe whatever Governor Cuomo needs you to believe at any particular moment.

How the Mighty Have Fallen

Police in the US fatally shoot over 1,000 people per year.

It's past time we divest from policing to truly keep our communities safe. pic.twitter.com/fDLQFMomAM

In 2019, 945 suspects killed were armed. 54 were unarmed. Nearly all of them were trying to kill officers

The organization — once proud defenders of due process — is now in the business of setting predators loose on unarmed victims while hamstringing the police.

Hospitals Overwhelmed by Flu Patients Are Treating Them in Tents

This is awful. Just awful.

“We are pretty much at capacity, and the volume is certainly different from previous flu seasons,” says Dr. Alfred Tallia, professor and chair of family medicine at the Robert Wood Johnson Medical Center in New Brunswick, New Jersey. “I’ve been in practice for 30 years, and it’s been a good 15 or 20 years since I’ve seen a flu-related illness scenario like we’ve had this year.”

Tallia says his hospital is “managing, but just barely,” at keeping up with the increased number of sick patients in the last three weeks. The hospital’s urgent-care centers have also been inundated, and its outpatient clinics have no appointments available.

That’s merely one hospital, but the story notes that the same scenes are being repeated “in every state.” In California, “several hospitals have set up large ‘surge tents’ outside their emergency departments.”

There’s just one problem: Time published this report on January 18, 2018, during a particularly nasty flu season.

We’ve been here before. We’ll be here again. We’re just lucky that the Wuhan Flu is such a “picky eater,” as Insanity Wrap’s friend and colleague Bill Whittle likes to say.

Unlike the Spanish Flu of 1918, which killed mostly the young and healthy who keep the world moving, the Wuhan Flu’s deadliness is reserved almost entirely for those who are already old, or already dying of something else, and generally, both old and sick.

Insanity Wrap gives a grateful tip of the hat to Mike Bruno for the great find.

Mike adds, “I found the referenced article I shared with you while trying to discover today if total daily hospitalizations in the USA actually exceed historic norms. No surprise that the powers that be make it very difficult to divine that sort of information (I still cannot find it after searching) ….and this fact is yet another clue that the dominant narrative may be false.”

Footage from inside Portland’s antifa Red House Autonomous Zone. They’ve reinforced their hard border and have set up a larger buffer zone around the occupation. pic.twitter.com/FAZEMnTrR6

Let’s call this what it really is: Camping for urban hipsters too lame to leave the city.

Rebel Without a Claus

Insanity Wrap is happy to inform you that there are actually two Christmases in the United States.

Real Christmas is one of the holiest of Christmas holidays, celebrating the birth of Christ, and happens each year on December 25.

But America also enjoys a winter holiday that Insanity Wrap likes to call “Christmastime Season.” It lasts for weeks and is mostly secular.

Many of the traditions of Christmastime Season have religious roots, but many others — particularly secular Christmastime music — don’t. It’s all good fun, joyous, and unapologetically commercial.

Christmastime Season is maybe the most American holiday imaginable, apart from Independence Day.

Putting up festive trees fit is one of those traditions with religious roots, but putting them up almost anywhere they’ll fit and look pretty has become a part of the secular rites of Christmastime Season.

One doesn’t have to be religious to love the heck out of Christmastime Season, just like Insanity Wrap has done every year for about five decades.

But then we get the scolds like Wisconsin Governor Tony Evers who have to ruin Christmastime Season for all of us, both religious and not.

We included the video clip of Evers responding to this dangerous, radical move of putting up a tree for one reason.

Listen to the question at the very start.

“Governor Evers, how do you feel about Republican lawmakers putting up a Christmas tree in the state capitol?”

Because a question like that isn’t really a question; it’s merely an invitation for the official to say whatever it was he wanted to say.

That’s not journalism. That’s acting as part of the government’s semi-private steno pool.

Either way, Insanity Wrap despises it, and you should, too.

Insanity Wrap had been assured that the science was settled.

If we asked for a recount, would that be interpreted as one of those “Too soon!” jokes?

On Saturday afternoon, state investigators seized all the alcohol from Lyons Den Restaurant and Taphouse.

Here in Colorado, we’re witnessing scenes straight out of Prohibition.

“This is what I think is probably a rare circumstance,” said Lyons Mayor Pro Tem, Mark Browning.

Trustees voted 4-3 to shut down the Boulder County restaurant after more than four hours of virtual discussion about the business.

Before this meeting, Lyons Den was one of four restaurants the state had suspended liquor licenses at since counties began moving into the severe risk level red of Colorado public health orders.

State officials went one step further and seized alcohol on Saturday at the Lyons Den.

“Probably over $5,000 of product went out of this building,” said head bartender, Stephanie Feltz on Sunday. “It was loaded up onto a truck and taken away.”

Local officials said they hope Saturday’s seizure “does not become a precedent,” but c’mon.

“Hope” in this case means, “We don’t necessarily want to take your stuff, but we can and we will.”

Because a precedent was just set, and everyone from the Lyons City Council to Insanity Wrap knows it.

The Biden plan for beating Coronavirus has three parts:

Thank goodness we have serious leadership at last.

Insanity Wrap remains unmoved by anything alleged President-elect Joe Biden has to say about anything, even on those rare occasions when he doesn’t sound less coherent than an over-boiled carrot.

With all the documented voting “irregularities” (we’re being uncharacteristically generous with our word choice here) going on in Dem-run cities in vital swing states, the very best Biden could possibly hope for is that maybe half the country won’t always think of him as “President Asterisk.”

If Biden is sworn in next month, we will refer to him as President Asterisk for the next four years, or until Kamala Harris gets bored and/or ambitious enough to 25th Amendment his sleepy ass out of office. 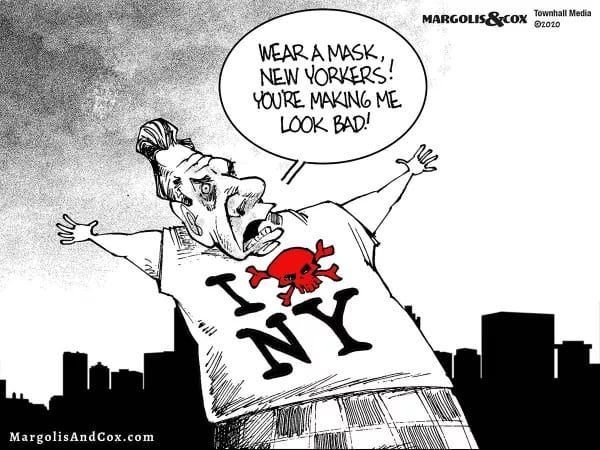 Well, we wouldn’t want that, would we?

It’s with slightly more seriousness that Insanity Wrap asks you if you know what really makes Cuomo look bad?

Previously On Insanity Wrap: Attack a Cop, Get Shot — Memorialized By BLM, Too