Previously, I’d just covered various win/lose/draw scenarios — and we’ll take a quick run back through those to catch up readers who haven’t been following along this whole time.

After that comes the part everyone has been waiting for: When I forget the wargaming, drop the scenarios, and lay everything on the line with an actual prediction for how the map turns out.

Some in the media think that it could be — might be? — a Biden blowout on a scale we haven’t seen since George Bush pere ran for Ronald Reagan’s third term in 1988. 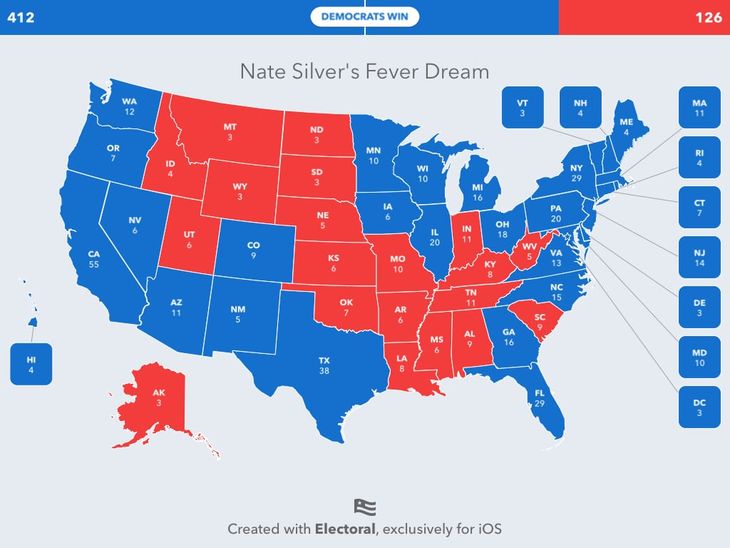 To believe this, you’d have to believe that Biden has a team like Bush’s and that Trump is the next Mike Dukakis.

Anyone outside the Beltway buying that one?

A more realistic scenario for a Biden win looks like this second map. 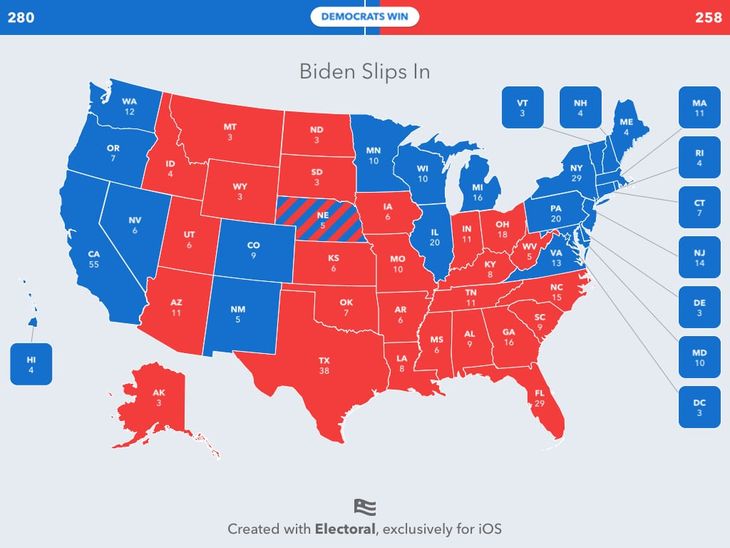 Please note that if Trump wins Arizona, Florida, and North Carolina (we’ll get to all of those shortly), then Biden must sweep all four Rust Belt battlegrounds to eke out a win. If Biden fails to win Nebraska’s D-leaning district, then Trump needs to take just Minnesota or Wisconsin.

Minus Arizona, Biden’s path to victory starts to look like one of those almost-vertical mountain paths that only goats can travel.

CBS News felt it necessary this weekend to perform a little last-minute CYA, warning viewers that POTUS might pull off a squeaker over SLOWTUS. 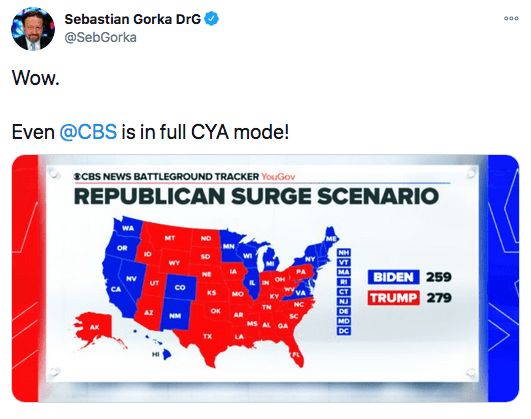 According to CBS News, Trump might win Pennsylvania — aka, Dem Vote Fraud Central — but still lose Michigan, Minnesota, and Wisconsin.

I’m reasonably sure that Michigan and Wisconsin would have their votes tallied in Trump’s favor hours/days/weeks before Pennsylvania gets called for either candidate in a close election.

Shall we get to the good stuff now?

If those numbers are at all accurate, then it’s all over in Arizona, Florida, and North Carolina: Paint those states red.

Wargaming the Electoral College: Can BIDEN Thread the Needle to 270? (Yes, Biden)

It’s the same story in Iowa and Ohio, but those two aren’t news to regular Wargaming readers.

So here’s the final battleground map. 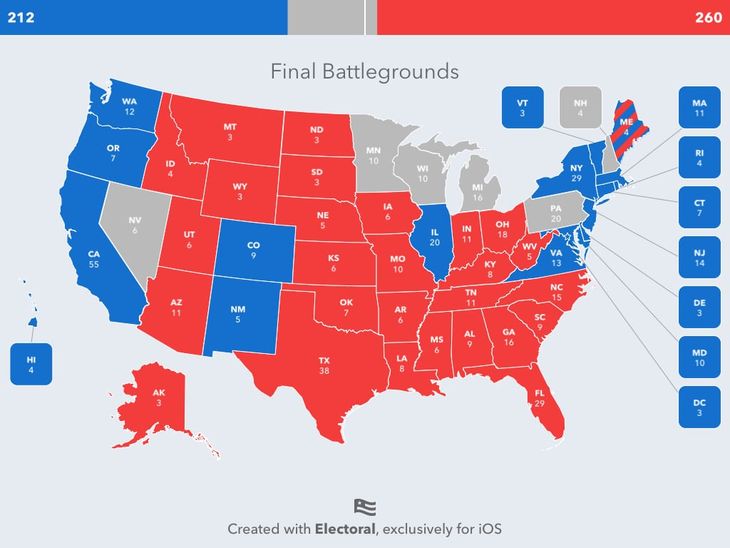 Note that every battleground is either a state Hillary Clinton won in 2016 (Nevada, Minnesota, New Hampshire), a traditionally blue state (Michigan, Pennsylvania, Wisconsin), or both (Minnesota).

What that means is that Biden has failed to expand the map from the previous election — which is usually not a good indicator for the challenger.

Let’s take a look at Trump’s final blowout scenario before we get to my actual prediction. 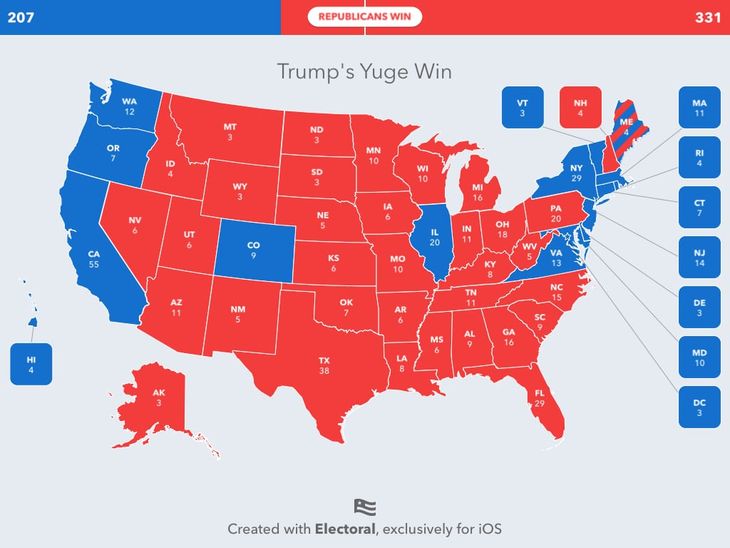 This doesn’t strike me as very likely.

Trump sweeping the remaining battlegrounds, plus picking off New Mexico, hardly seems possible, but there is a (very) outside chance.

I’ve heard some rumblings out of New Mexico that it could possibly flip, so I painted the state red for Trump’s blowout map. 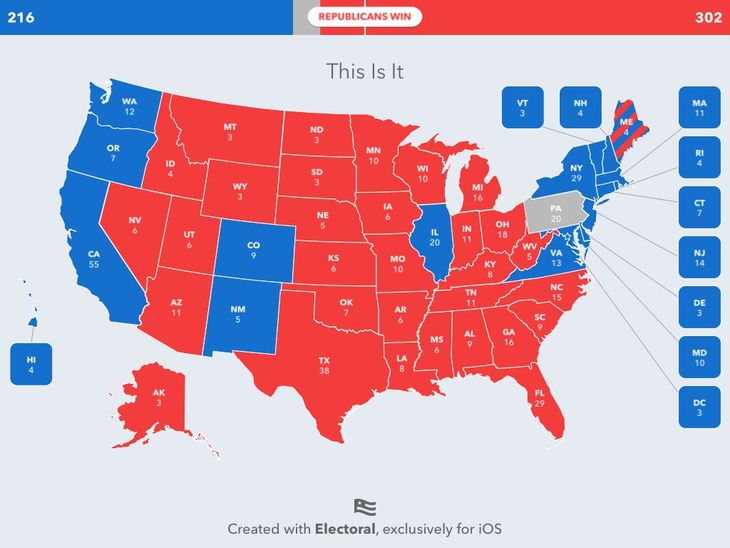 I’ve gone pretty conservative here, believe it or not, but I do think Trump will win — albeit probably without any shocker flips.

If I’m too optimistic about any one state, it’s probably Minnesota.

I’ve purposely left Pennsylvania blank because I don’t think we’ll have any idea by tomorrow night what’s going on there.

Aside from total chaos, that is.

If Trump wins bigly enough, then we’ll be spared the anguish of everything coming down to how much the Dem machine can cheat in PA.

If not, then all this — the country, I mean — might just be moot.

In that case, Biden wins… and we’re back to “moot.”

My final prediction aside, there does remain the chance for a couple of ringers.

We already discussed New Mexico going red, but there are also outside (very outside!) chances for Trump in Colorado, New Hampshire, and even Oregon.

If New Hampshire goes Red early, then start looking for other surprise Trump wins in our Outside Chance category.

I can’t speak for my blogmates, but you can bet that your Friendly Neighborhood VodkaPundit will be enjoying a Bloody Mary or two during the daytime, and icy martinis once the sun goes down.

And if I’ve completely embarrassed myself with today’s prediction, then by tomorrow night I might graduate from cocktails to heroin.

Tune in tomorrow and find out…

For our VIP supporters: Chins Up, Buckaroos — Donald Trump Is Going to Win

Steve launched VodkaPundit on a well-planned whim in 2002, and has been with PJ Media since its launch in 2005. He served as one of the hosts of PJTV, a pioneer in internet broadcasting. He also cohosts "Right Angle" with Bill Whittle and Scott Ott at BillWhittle.com. He lives with his wife and sons in the wooded hills of Monument, Colorado, where he enjoys the occasional adult beverage.
Read more by Stephen Green
Tags: 2020 PRESIDENTIAL ELECTION DONALD TRUMP JOE BIDEN