Wargaming the Electoral College: Can BIDEN Thread the Needle to 270? (Yes, Biden)

All the Sharpest Political Minds™ (even if only in their own) have spent the entirety of the Wuhan Flu lockdown trying to convince you that President Donald Trump will have a very difficult time putting back together his 2016 coalition. Even if he does, they’ve said in one TV appearance and Twitter item after another, Trump might at best barely win the Electoral college vote, while getting creamed even worse in the popular vote.

I’m here to put the conventional wisdom in the corner with Baby.

On Facebook earlier this week, a friend of a friend argued that it’s actually Joe Biden (D-Dementia Ward) who actually has to thread the very finest of needles.

“I love hearing pundits on TV talk about Trump’s ‘narrow path,'” he wrote, “When in fact, it’s the Democrats who have the narrow path.”

He reminds us that “Trump is not the one who has to flip states,” and that “Trump can say something Biden can’t say: ‘I’ve won in these [battleground] states before.'”

Minus Minnesota, of course, as our Facebook pal admits. But that Trump has widened the battlefield to include Minnesota is a tell that our friend-of-a-friend is on the right track.

Let’s start this edition of Wargaming the Electoral College with that premise and with the broadest possible battleground state map. 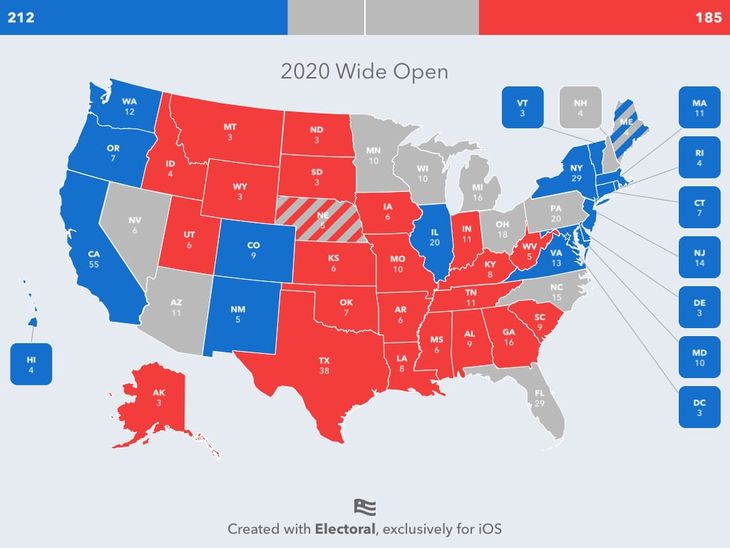 You might have seen some rather fanciful scenarios at FiveThirtyEight and other outlets, showing a yuge Biden sweep in which SLOWTUS wins all the blue states Trump flipped in 2016, plus Arizona, North Carolina, and Texas.

I called BS on that before, and I’m calling BS on it again.

ASIDE: I won’t bother getting into vote fraud. If the Dems can steal big enough to steal this one from Trump, then voting and the Electoral College no longer matter and this whole country is moot.

Biden winning that bigly would require Trump to suffer an almost-unprecedented loss of support from Republican voters.

When you remember that millions of Trump voters were far less enthusiastic about a still-unproven candidate in 2016 than they are today, Trump losing that much support seems… unlikely.

Despite — or is it because of? — four years of unrelenting hostility from the press and the Swamp, Americans are more willing to call themselves Republican than they were in 2016.

And far fewer people are willing to call themselves Democrats.

With all that in mind, I feel confident taking Florida, North Carolina, and Ohio out of play.

I’m leaving Arizona in play for the moment because Republican voter registration in that state hasn’t been quite as strong as it has been in other battlegrounds. We’ll get back to Arizona momentarily.

However, I’m leaving Nevada in play (Clinton won there in ’16) because Republican voter registration there has been strong. Losing AZ’s 11 EC votes to winning NV’s 6 wouldn’t quite be a wash — but it would be close.

So here is our refined battleground map: 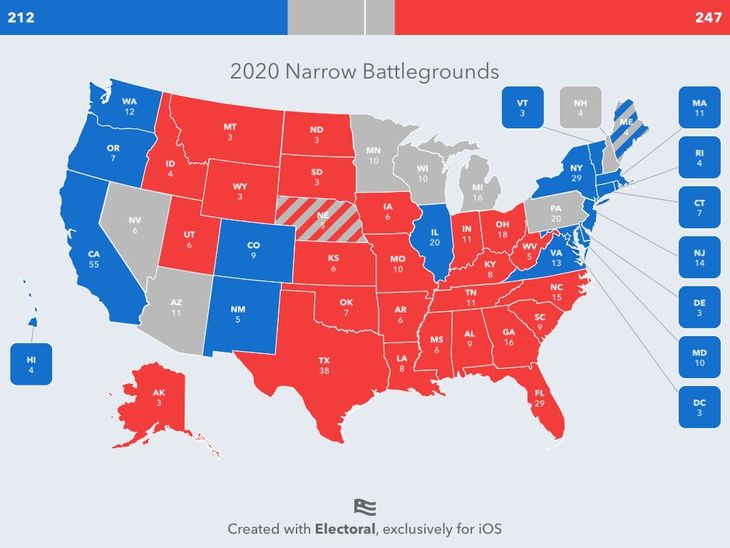 Biden’s path to 270 looks quite a bit narrower than it did just a minute or two ago, doesn’t it?

From there, things actually get worse for SLOWTUS.

Let’s spot Biden-Harris (or is it Harris-Biden?) all of the Southwest battleground states, plus New Hampshire. We’ll even spot Biden Maine’s split EC vote that went for Trump in 2016. 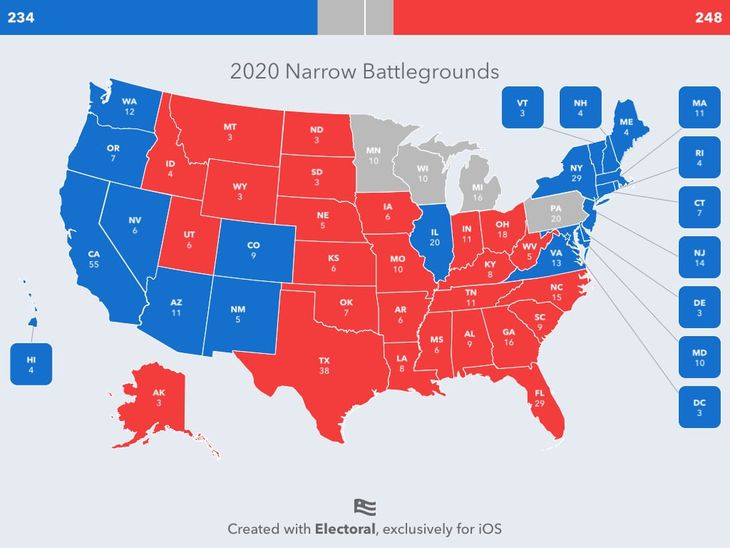 Biden could sweep the Southwest (minus Utah, of course) and New England, and still trail Trump by 14.

Given all that, there are still four traditionally blue states in play — three of which Trump won the last time around.

Biden could hold Minnesota and peel back Pennsylvania, and still lose narrowly. 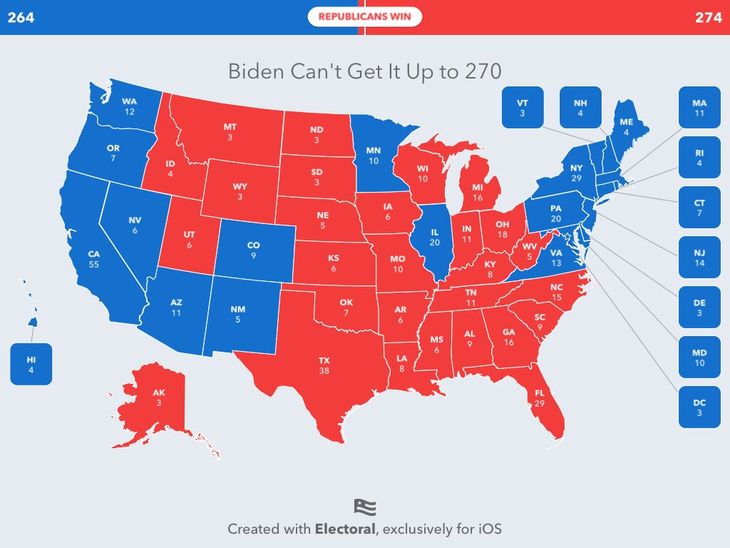 If Trump does win Pennsylvania — which seems increasingly likely, given current on-the-ground reporting and Biden’s declaration of war on oil and gas — then Biden’s path narrows further still.

On this map, without Pennsylvania, Biden would have to sweep all three remaining Rust Belt battlegrounds: Michigan, Minnesota, Wisconsin. 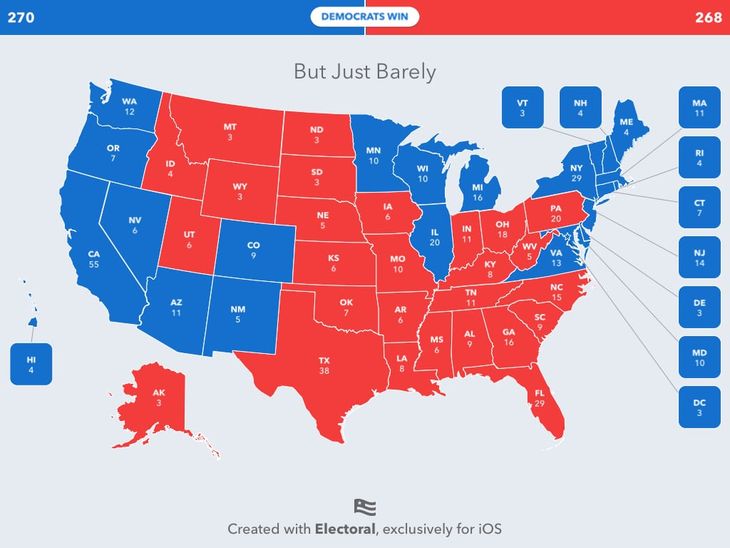 Biden would likely lose in the House, where each state gets one vote and GOP delegations control the majority of states.

If Trump holds Arizona, then Biden must take all four: Michigan, Minnesota, Pennsylvania, and Wisconsin.

Even then, a split Maine vote would create yet another tie, sending the election to the House.

If Trump wins Arizona and flips Nevada — possible, but not (yet?) likely — then he could lose any three out of our four Rust Belt battlegrounds and still win reelection.

If Trump were to do all that and pick off New Hampshire and that one Maine EC vote, then he could lose all four Rust Belt Battlegrounds. 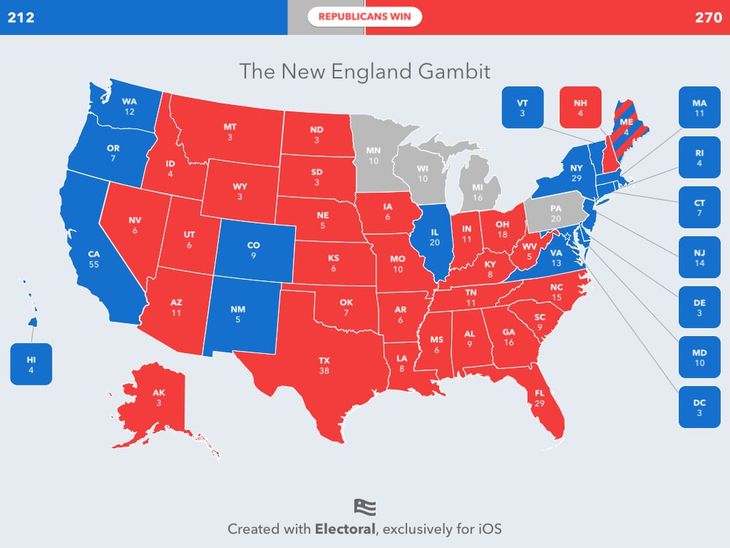 At this point, I admit that my winning scenarios for Trump are becoming more and more fanciful.

But it’s important that you see them anyway.

Not because I’m driven to flights of fancy, but because all these scenarios drive home the entire point of today’s edition of Wargaming the Electoral College: Trump has more and wider paths to victory than Biden does.

Absent a broad-based desertion of Trump voters — something for which there’s zero evidence — it’s Joe Biden who has to somehow thread the needle to 270 on Election Day.

Steve launched VodkaPundit on a well-planned whim in 2002, and has been with PJ Media since its launch in 2005. He served as one of the hosts of PJTV, a pioneer in internet broadcasting. He also cohosts "Right Angle" with Bill Whittle and Scott Ott at BillWhittle.com. He lives with his wife and sons in the wooded hills of Monument, Colorado, where he enjoys the occasional adult beverage.
Read more by Stephen Green
Tags: 2020 PRESIDENTIAL ELECTION DONALD TRUMP JOE BIDEN